I have what is known as privacy mortise lock with thumbturn, this (the inside): 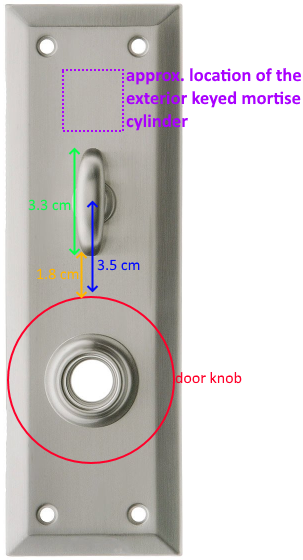 PS: the hole in the picture is the door knob

I need to install a smart lock, and I have research many:

Main problems are: there is no standard deadbolt inside, only a thumbturn, and the thumbturn is close to the door knob, not leaving too much space to install a smart lock hardware.

Changing the whole lock mechanism is currently not possible. This is a metal door, and the holes, specially the exterior ones, follow the building standard and can't be modified. Plus I believe the new lock systems are not that big, I'm not sure. Installing a whole new lock mechanism would probably require a new door.

Browse other questions tagged doors lock deadbolt doorknob or ask your own question.

4
How can I remove a Mortise Lock and deadbolt from a door?
0
Key card door lock?
0
Repair or installation of a mortise lock with deadbolt in an exterior door
1
Unable to get bolt out of door
0
How can one replace a Lori branded lock that won't fit in a new door
0
How do you remove an ASSA double cylinder deadbolt?
0
Reconfigure metal door lock system from mortise to individual door knob and deadbolt