This is a Zinsco Panel. Please see the image below. Can anybody tell me what are the copper plates on the left side and what is the purpose to have those?

On the right side the first two 15 Amps breakers (blue ones) are for bedrooms, and are wired like multi-wire circuit.

If I turn off the white breaker, the power will shut off. 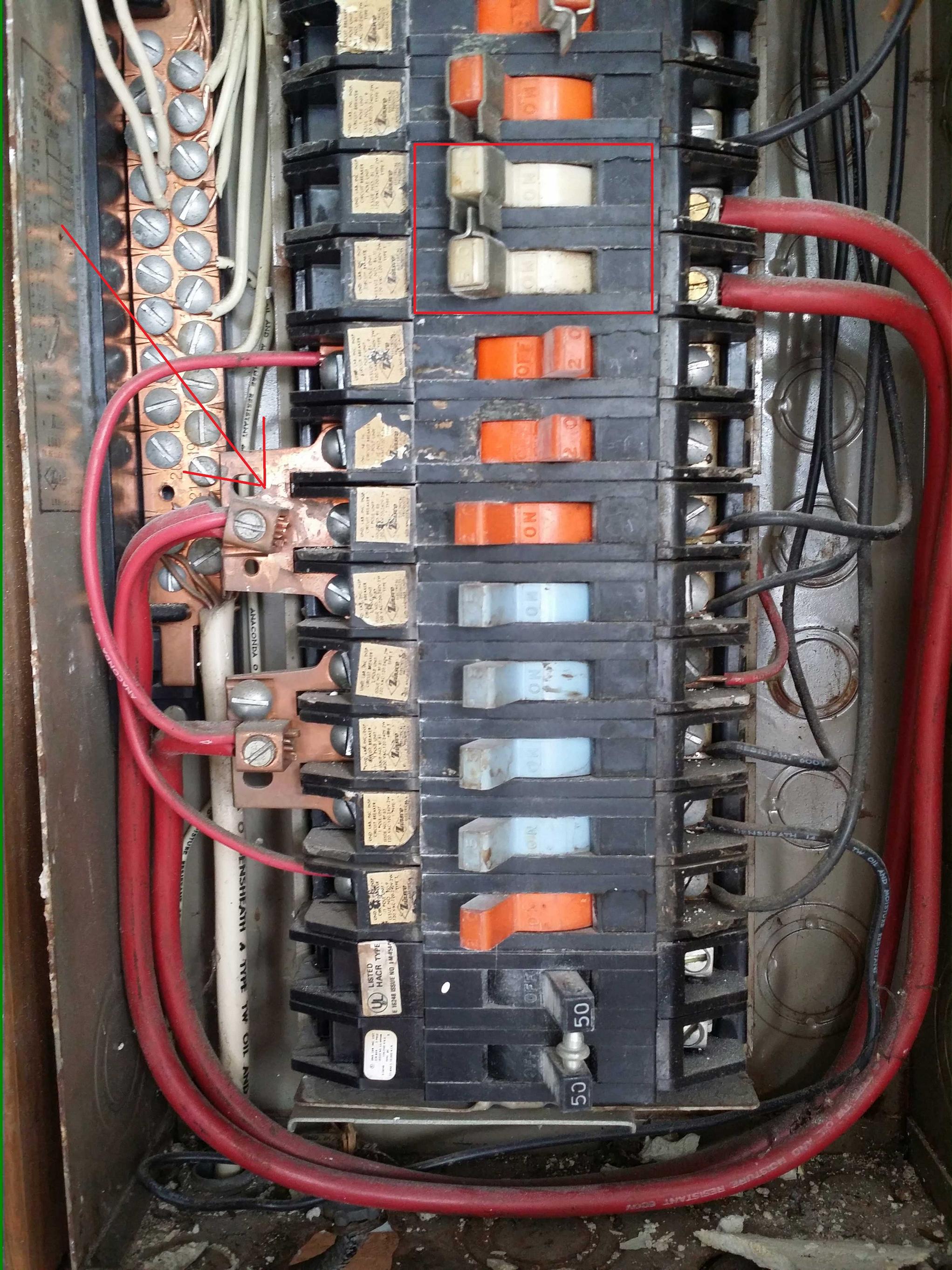 Here is the entire panel 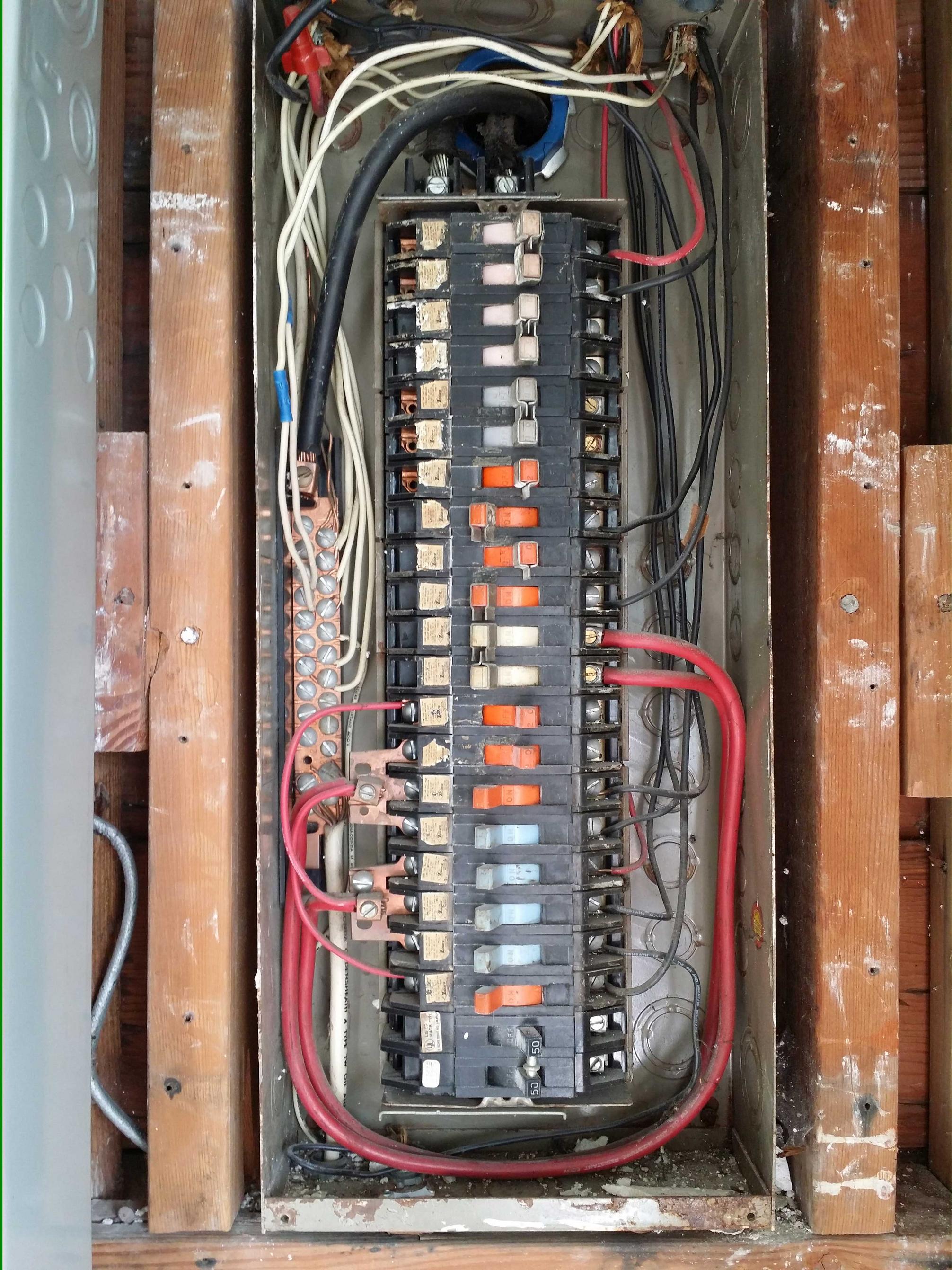 Thank you for letting me see that. That... is Zinsco's implementation of a "Rule of Six" panel.

The obsolete "Rule of Six" is that you could have up to six main breakers to shut off your house. That's because houses were getting bigger and bigger electrical service, yet breakers larger than 60A were still very expensive. So a traditional main breaker like modern panels was not cheap enough for builders.

The "Rule of Six" allowed them to use cheap <=60A breakers for up to five large appliances, then the 6th breaker served a "built-in subpanel" that had the rest of your branch circuit loads (in the vernacular of the age, they called them "lighting" loads but it meant virtually all 120V loads).

Zinsco's approach was to only provide bus-bars in the "Rule of Six" area. And then the lower "lighting area" breakers didn't use busbars (except as something to physically clip onto), and fed the power from the left to the right, as you see. Zinsco was always into creative busing.

I see where this panel is being used for less and less. It's probably good to hasten that along. I count only 8 1-pole branch circuits that you are even using, so now would be a fantastic time to have the power company "pull the meter" (virtually, no doubt) and swap that panel for something modern. Like a Pushmatic :) No seriously, I would go CH or QO because they are compact, and a 42-space panel will fit there. If those joists are 14.5” apart, a new panel will drop right in.

One last thing, you see Zinsco's clever way of handle-tying breakers. Some of them have been flipped around so they no longer tie. You should flip them back so they are tied. That way it takes 6 throws instead of 8 (the person frantically turning off the power doesn't know some of them are dead).

Those clips are for what were called "feed through" breakers. The breakers with those clips are NOT electrically connected to the bus bars, they are just mounted to them structurally. So in this case the upper grey 2 pole breaker with the red box around it is acting like a "sub-main" breaker. It is connected to the bus, then the load wires of that breaker are feeding the LINE side of the ones with the copper clips and those clips are like new bus bars. So each pole of that 2 pole grey breaker is feeding 4 separate 1 pole feed-through breakers. If the grey breaker trips (and that's a big IF with Zinsco, but I digress...), it will kill power to all 8 of those single pole breakers wired to it. It's like having a sub-panel within your main panel. With other brands, they do this with what's called a "split bus" option.

Not the answer you're looking for? Browse other questions tagged wiring electrical-panel or ask your own question.

2
How should I get the service entrance cable to my new adjacent panel location?

2
Adding another circuit to a full panel
1
Ceiling fan wiring switch question
1
How to troubleshoot wiring that trips AFCI breakers?
3
ALUMAFLEX Wire + Copper Wiring
6
Trying to figure out how this service panel is getting electricity
2
Securing NM wiring on the electrical panel back board - Multi-cable staple