I'm looking to add central A/C to my 1970s era home. The electric panel is a GE Load Center, 125 Amp max. It's basically "full" with no space for additional breakers.

The bids for the electric panel "upgrade" range from $600 to $3600. Crazy span. "Upgrade" is in quotes, because I think what it boils down to is 2 choices, hence the span in price. I don't believe the service needs to be upgraded:

I haven't found much discussion or videos for what installing this main breaker kit actually does, can anyone dumb it down for me? 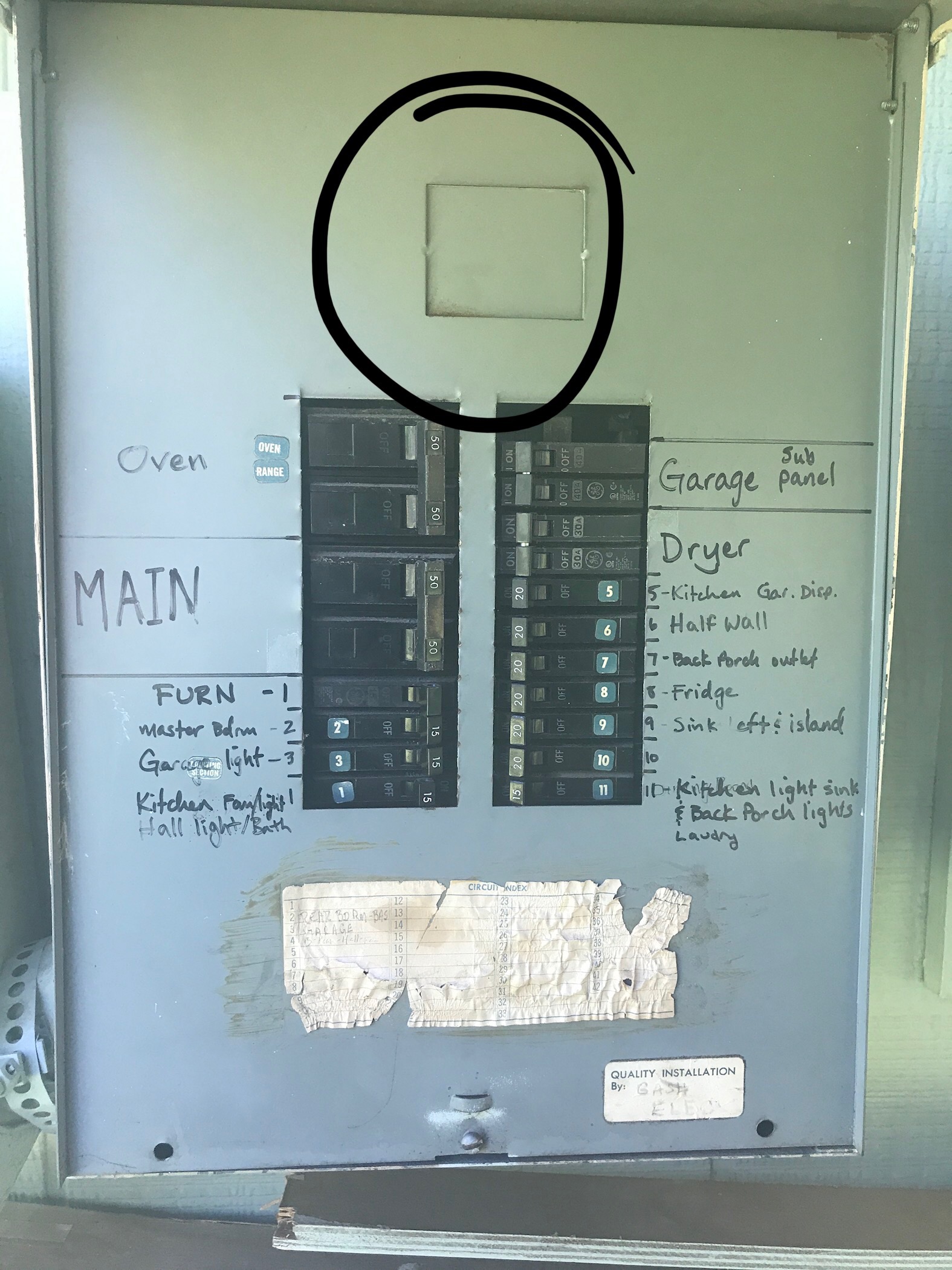 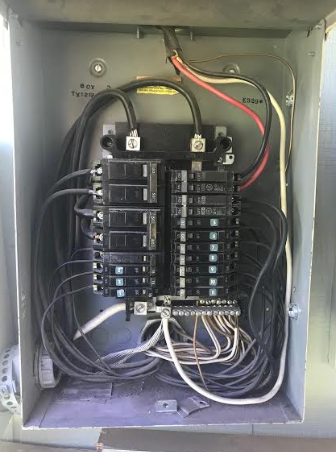 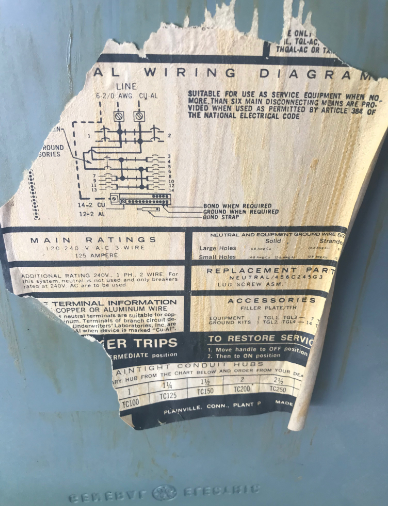 Update: We’ve scheduled the work and will be doing a whole new panel. Again, this was part of a larger project (heating/AC), so the information I was after was “what would adding a main breaker “do””. I think the answer is “not much” or at least “not much good”. I still don’t have a clear picture of how the $600 bid guy was going to accomplish what he wanted to do and be able to pull a permit. All worked out in the end, as several commenters have said, the new panel makes a lot of sense from a resale point and we had a bid that included a new panel for just a bit more $$.

Also, I learned a ton! So I’ll definitely be posting in these forums again. Thanks all!

Holy smoke, this is a "Rule of Six" panel!

A Rule of Six panel has a "Main Breaker" area with up to six main breakers. All must be shut off to shut off the power. All six have their buses energized at all times. Then, one of those breakers feeds an "internal subpanel" area with any number of breakers.

In this case, your panel is built as a "Rule of Three". The first two breakers are #1 in the upper left, #2 an essentially identical breaker in the 2 full spaces in the upper right, and #3 the mid-left breaker marked "MAIN".

Note that the #3 breaker actually sits in the subpanel area and is fed via those two fat wires. It is backfeeding the subpanel area. Those two wires are hot at all times and cannot be shut off without pulling the meter.

You are saying "But wait. The #2 breaker is not as you described. It is narrow "double-stuff" breakers not a full-sized one." Yes, and I don't want to know what kind of black magic got you there. It looks like someone broke off some of the physical gating to separate the Rule of Six area from the subpanel area. It is bad.

Look at the dryer circuit. It has one leg in the Rule of Six area, and one leg in the subpanel area. If you shut off the "MAIN" breaker, half the dryer would be hot and half dead. Very bad!

So it's worse than "need to squeeze in another breaker", it's actualy you need to move the dryer breaker away so you can restore the breaker in that location to a traditional full-size breaker as is required by the diagram.

Feel free to use a GE Qline panel that supports double-stuffs, so you can keep using the same breakers. However you will probably not be able to use double-stuff breakers going forward because AFCI or GFCI is required on almost every circuit. So get a realy, really, really big subpanel! Spaces are cheap.

Bonus points if you plan it so you can cut over the subpanel to be a future main panel.

Adding a main breaker here is simply not an option (it already has 3) and this panel is obsolete (being Rule of Six, nothing wrong with GE Qline).

By the way, whoever the genius is who stuck numbers on the breakers, did not read the panel labeling. It indicates the numbering. Note how there is only 1 number for the upper right breaker, that is because the listing and labeling does not permit multiple breakers there.

Also whoever put the double-stuff in the upper right, don't invite him back either. he clearly mutilated the panel in order to make that dryer breaker go there.

Hard to say based only on what you show and describe here. We can't really know exactly what you have without seeing what's inside.

The 2 pole 50A breaker what has the word "Main" written next to it is probably the main breaker for all of the power coming from your utility meter, or al least may have started out that way at one time. But when you say that turning off that breaker does not turn off the "oven", that means something else it off kilter here. So you may have something called a "Split Bus" panel, which makes this entire thing complicated if that's the case.

So if I had to guess as to the difference in cost, the person who quoted you $600 did not actually know what he was looking at and assumed this was simply a back-fed main situation, meaning that the service wires are coming into what would normally be considered the "Load" side of the 2 pole 50A "main" breaker, then when the breaker is On (closed), the power goes through the breaker stab assembly onto the main bus bar of the panel, feeding power to everything else. This is actually a variant of the "normal" way to do this, because normally a Main breaker is SEPARATE from the rest of the usable plug-on panel bus space. So whomever first did this knowingly sacrificed 2 breaker slots in order to avoid buying the Main Breaker Mounting Kit this panel required to put the Main AHEAD of the bus bars and feeding them. The part that you circled is where the Main breaker would go, but it requires internal parts that are not likely there. Even though this is 40+ years old, GE has not really substantially changed this design and the "kit" is likely still available to move that breaker into being a separate main. Once you do that, the two slots that hold the Main now become available to have a new breaker(s) installed in them.

However, you DON'T have that situation if the Main does not kill power to the oven! So I have no idea WHAT you have there, and most likely the guy who thought he could do this by simply moving the main to gain two new slots was thinking that too. He also was likely going to do this as a "repair" rather than a replacement and not pull a permit, because pulling a permit for replacement means upgrading your entire panel and breakers to modern codes, i.e. AFCI (Arc Fault Circuit Interrupter) and GFCI breakers where you don't have them now.

The Split Bus and Sub Panel situation makes this more complicated and even then, it doesn't explain the issue of you having to open the oven breaker to kill all of the power. So in reality you may have something here that someone before you hacked and screwed up, so my guess is that the $3600 quote was from someone who DID understand what you have here and would only do it as a complete rip and replace to modern codes, done with pulling a permit, inspections etc. etc., which then also meant using the new (more expensive) breakers to be able to pass inspection.

PS: Here is what the Main Breaker Kit looks like for this; 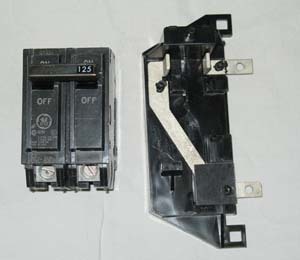 The two tabs replace the main incoming lugs, so your incoming power leads would now go to the Main breaker lugs and this connects that main breaker to the bus. In your case someone would ALSO need to re-do the wiring of those two 2 pole twin breakers for the dryer and sub-panel and to connect the upper and lower bus sections, which I'm not sure of how that would be done, it might mean replacing the entire bus structure in that panel.

If you were a customer of mine and wouldn't let me rip out that equipment, I would walk away. There isn't a chance in the world I would add additional load to the existing over current protection. The load center you have is rated for energy consumption from the 60's. Modern day energy consumption creates more heat in the equipment because of harmonics, high frequency from appliances. The bus isn't great at dissipating heat from computers, HID lighting, non-linear loads.

If you don't require additional bonding, grounding or undescribed upgrades...I would charge $1,200 to replace the enclosure and install a 40 circuit GE or Siemens load center with all new circuit breakers. Square D would cost more. This would NOT INCLUDE COST OF PERMIT, AFCI, GFCI protection is required.

2
Can I add a 30 amp breaker to a sub panel being fed from a 50 amp breaker
1
Can I install a 60A main breaker in a load center rated for 125A?
1
Neutral on main service breaker?
2
Main Breaker - Miswired connection Question
2
Do I have space in the main panel for a 60 amp double pole breaker?
3
Max load on a 30Amp Sub Panel
1
Trying to upgrade breaker from P215 to P220