Have a ceiling fan with a single wall switch that controls both the light fixture and the fan. If I flip the switch to turn the fan off, the fan slows down like it’s turning off, but then immediately starts spinning in the opposite direction, very slowly. This happens when the wall switch is off! Turning the switch back on stops the fan, reverses its direction and then makes it go full speed. I’ve never seen or heard of this problem before and I’m lost. Thoughts? Thanks.

Edit: Fan is a hunter ceiling fan with a light kit (controlled by one chain) and another chain which controls the fan’s four speeds: High, Medium, Low and off. 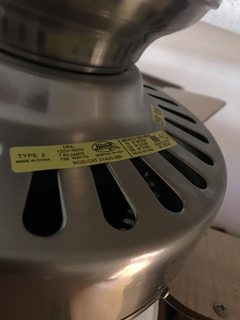 It looks like a model 2 fan, the sticker says "21405-380". The ceiling fan has a black reverse switch on the housing. I can cycle through all speeds properly when the fan is on.

The problem is actually gone now, it went away after I turned the switch on and off again several times. Originally, when I got home today the wall switch was off but I noticed the fan was spinning slowly. I suspect the wall switch and I will be watching to see if it turns on by itself again.

Browse other questions tagged electrical ceiling-fan fans or ask your own question.