Currently in the process if planning/designing a privacy fence after recently removing the old posts from the ground. I'm now at a point that you might call analysis paralysis involving determining the "best" method for setting my wood fence posts into the ground using a method that will, at least, not unnecessarily speed the deterioration of the wood posts.

I of course have looked at this post and actually bought the recommended book, yet I'm still on the fence about what method to use. The fact this post is almost 10 years old also adds to my hesitation.

This post brings up a good point about water more or less osmoting, or trickling to the area of least resistance when using crushed gravel in a area of high clay content.

I'm in Columbus, OH, with fairly clay like soil. It will be a 6' privacy fence, generally half board on board pattern with the other half consisting of custom made 1x2's to form a lattice. It could potentially be a little on the heavier side as the lattice will be framed using PT 2x4 lumber.

here is an image of my design so far.

Concrete was the original plan until searches brought up the many disadvantages or anecdotes ranging from premature rot due to the porous concrete attracting water, wood shrinking and thereby letting water enter between the wood/concrete intersection, etc.

Some say that the 6" or so of gravel you throw at the bottom of the posthole is there to allow for the concrete to drain. Others say it will simply act as a low resistance refuge for water to collect.

Crushed gravel/paver base became the next plan as I saw many posts vouch for the strength of using this stuff over concrete, even comparing its holding strength to concrete. This would also allow for easy post removal/replacement also quite a bit cheaper. On the other hand, the gravel will be coarser than the clay/dirt around it and potentially also suffer from unnecessarily collecting water.

I'm hoping for some new insights to point me in the right direction! Seems to be a simple topic that perhaps I'm overthinking. Maybe there are better methods I also have not mentioned? Perhaps the best method is simply concreting the very bottom 10" of the post hole and then backfilling with dirt?

It doesn't much matter. The Simpson post base listed by @Dotes will work fine, but it's probably more expensive than just digging a hole and filling it with concrete.

Something like a Metpost just banged into the ground will probably be easiest to put up, but it is very hard to get the posts exactly vertical (by the time you have fitted the post, it is too late to adjust the angle of the spike).

A wooden post set in concrete will eventually rot, but it would last 20 years in the UK, and Ohio looks like it gets colder in the winter and dryer in the summer than the UK. I wouldn't worry about it.

The best way I've seen designed is using a Simpson MPBZ Moment Post Base embedded in the concrete footing, with the 4x4 or 6x6 post on top of it. I think it's pretty new, and Simpson isn't pushing them on us, so people haven't seen them around much.

It's great because none of the wood post is below the ground, so you won't have the potential problems you're trying to prevent. It's the only post base they have that doesn't require the top of the post to be supported. 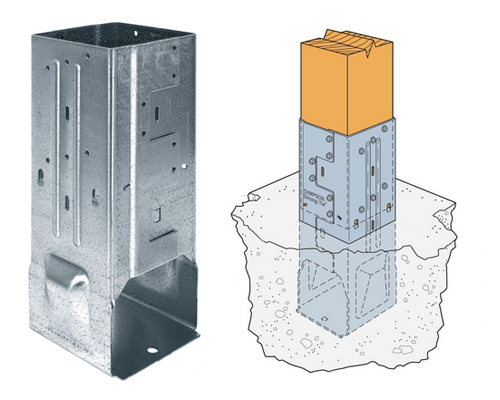 In clay soil it will not matter what kind support, the one with a hole in the bottom crushed rock or concrete all of them will be surrounded by a media that holds water. The best longest lasting method would be to treat the posts yourself by soaking in a wood preservative for a few days then let dry, after that embed in concrete, concrete will keep the air out and dirt and critters from getting to the wood but the preservative will retard rot. I grew up on the west cost in an area known for its clay soil (general Vallejo’s adobe house is still there). By adding additional preservatives the posts last longer, crushed rock will also work but remember the post will be sitting in a pool of water. With concrete make sure the concrete is above the ground level and sloped away from the post if below the ground level the water will puddle at the surface and all the air and bugs will shorten the life of the post.