Proper way to brace a knee wall with hold downs

So I've taken out a section of wall between my kitchen/living room and am leaving only a knee wall (41" high) that will have a breakfast bar on top of it. Removal of the wall went fine, however, the remaining knee was is fairly flimsy and does not tolerate side load at all. Kitchen cabinets will go along this wall and probably add some stiffness, however, the fact I will put a breakfast bar on it makes me think I need more rigidity.

I would like to stiffen the wall and am thinking the most appropriate solution would be using a Simpson hold down, although I'm uncertain on both the hardware and blocking that is necessary. The wall itself does not sit directly above a floor joist but is instead offset so that the outside edge of the wall follows an inside edge of the joist (see picture below). I'm thinking that bolting the bracket through the baseplate to the subfloor won't do much, so it was my plan to run a 4x4 the length of the wall in the corner of the joist and subfloor, then run a threaded rod through it. 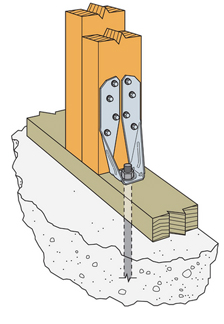 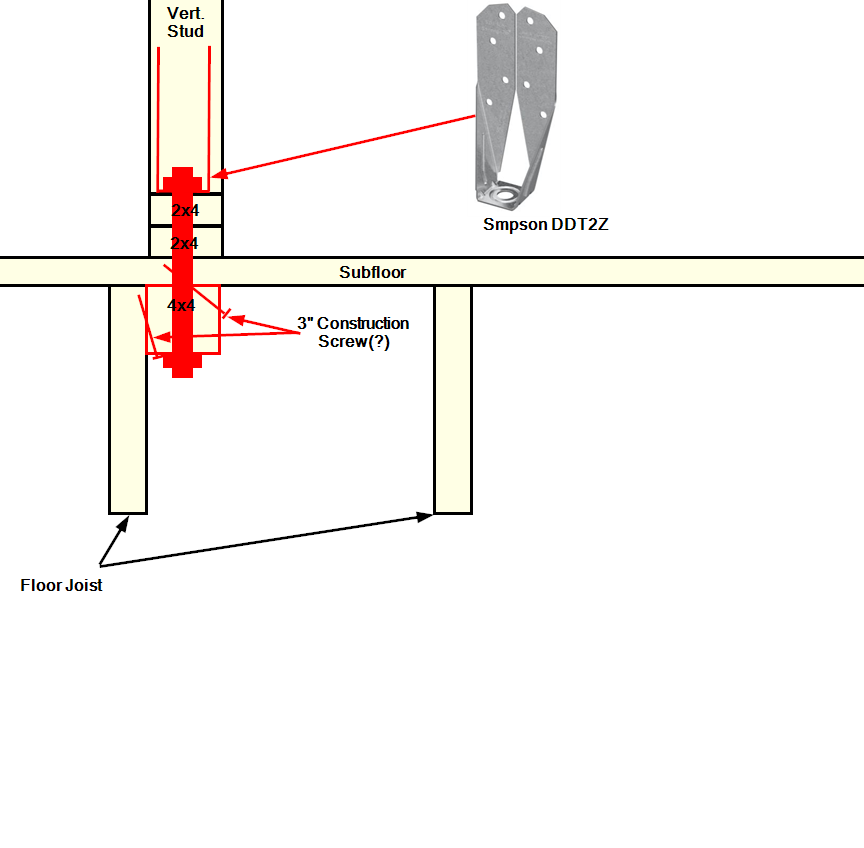 Yes, you're on the right track to improve lateral stability. Your ideas will all help.

Some things to add is a layer of OSB or plywood as wall sheathing on one or both sides, if possible.

Another thing would be joist blocking in the floor below. An example of that would be a few 14.5" long 2x10 between the joists a bay or two on both sides of the knee wall (if your floor is 2x10 at 16" OC.)

Use screws and subfloor glue instead of nails for this. You already know it's not strong in the one direction, but also try to imagine how everything will move if you installed a countertop and a person lifted up and pushed down on the edge. The top and bottom plates will try to rotate, but the OSB/plywood wall sheathing will resist that. Screws and glue will also prevent that rotation.

If your wall would be too thick with OSB/plywood, then at least use Simpson coil strap along both sides of a few studs to prevent rotation between the studs and plate. What I'm saying is that even if you make the studs stiff, your next weak point is at the plates.

Even if your wall is super stuff, next the floor sheathing (and the single floor joist under it) will flex/bow as the wall is wiggled, so that's what the floor joist blocking is for. If you can't do full depth joist blocking, do cross bracing (it's like making an X with 1x4s.) The tops of your floor joists can't move since they're connected to the floor sheathing, but the bottoms of your joists are the place that movement will occur, so adding something to stop that will help, even if it's just a direct applied drywall ceiling/lid below.

Kitchen cabinet lowers will help so much more than you think. I've had to put countertops with and without cabinets on a knee wall for commercial receptionist desks and the difference is night and day. We always overkilled it if there wasn't a cabinet to hold anything, since we can't stop people from sitting on the edge of the countertop after it's installed. Cabinets added a ton of stability though.

Not the answer you're looking for? Browse other questions tagged walls framing anchor or ask your own question.

7
Proper size of header to support new door in load bearing wall?
3
Proper way to connect joist to top plate?
1
knee wall no venting possible
0
Knee Wall Without Top Plate
0
Knee wall in attic
0
Knee wall separating from rafters in garage attic
1
What is the proper way to start sheathing an exterior wall?
0
Framing a knee wall in front of a 1/2 height foundation wall with windows