Can I replace a window in a garage gable wall without adding a modern header?

So, I have an older construction home (1948, a great year for lumber in MN) with a detached garage connected to the breezeway. The garage roof structure has rafters and collar ties with two storage joists (maybe for shear) and joists on the gable ends running between bearing walls. The gable walls are rafters stick framed (very basic image attached) down to a double top plate with the previously mentioned joist nailed to both the rafters and studs above the double top plate.

There is currently an 8ft wide barn sash window on one gable wall and two 7ft tall by 8ft wide garage doors on the other. None of these existing openings have anything but the double top plate as the header. The garage doors have king and jack studs like a regular doorway, but the window only has king studs with cripples from the top plate to a single 2x4 header and a 2x4 sill plate with cripples down to the bottom plate. None of these openings have any sag in them.

Shouldn't the ridge be passing some load down through this window and creating sag in the middle of the window span? or is this being mitigated by the joist above it being nailed to the gable studs as well as the rafters? I want to convert this window into a roll up door and was thinking I could just frame it the way the garage doors are framed to keep the opening 7ft tall. Not so sure the permit office will share my enthusiasm for this idea, with good reason. 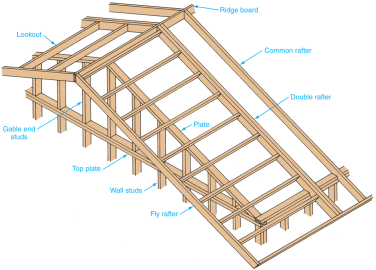 A ridge board (as you've drawn it) isn't a beam. It's just a connection point and lateral bracing for the rafters, and (in the case of the overhang) support for the fly rafter. There's virtually no roof load transfer through the gable wall as the rafters and wall plates, which act as rafter ties, work as a truss system, just as they do in the middle of the building.

That said, modern standards would have at least a superficial header over the window to prevent sag in the wall. It's unlikely to be a problem if it hasn't already been, as the sheathing is acting as a shear beam, but since you're modifying the opening you'll probably put in a 2x6 or better U-header to meet modern standards.

Talk with your inspector. Even if (s)he calls for a 2x10 header, the cost is fairly minor, so it's worth doing right.

Not the answer you're looking for? Browse other questions tagged windows framing load-bearing garage-door gable or ask your own question.

2
Recommened nailing schedue for cripple studs between header and top plate
2
All-around header dimensions for external wall
1
Window framing gaps and split wood
4
Can I frame a new window without adding jack studs?
0
Splicing wall plates at doors and windows?
2
Should window headers be set against the top plate or at rough opening height?
1
Sideways king studs!
4
What are the steps to raising an interior wall header?
1
How should I replace this rotten window header?