How to seal straight-thread faucet shank / nipple to the faucet?

I have a faucet which requires installation of a separate threaded 'shank' or nipple which acts as both the water supply inlet and also is used to anchor the faucet to the sink deck. These are supplied as separate parts to allow for varying thickness of countertops.

(Shown in the photo below - one male end of the shank goes into the faucet body, the other end protrudes through the sink and is fastened tight with the nut & washer).

These shanks have a 1/2" IPS straight thread. They are not NPT tapered. So I was expecting to use a rubber O-ring or washer when screwing them into the faucet. However there is no 'seat' or other surface in the faucet where such a part could go. It would literally just get lost inside the body of the faucet (before the valve).

I had thought the golden rule was that tapered threads require sealant (or tape) and straight threads require a washer/o-ring. But this faucet seems to allow for neither. The instructions with the faucet don't say.

I attempted to take apart some other old faucets to see how this was done, but the shanks were impossible to unscrew.

So - how can I seal these parts? 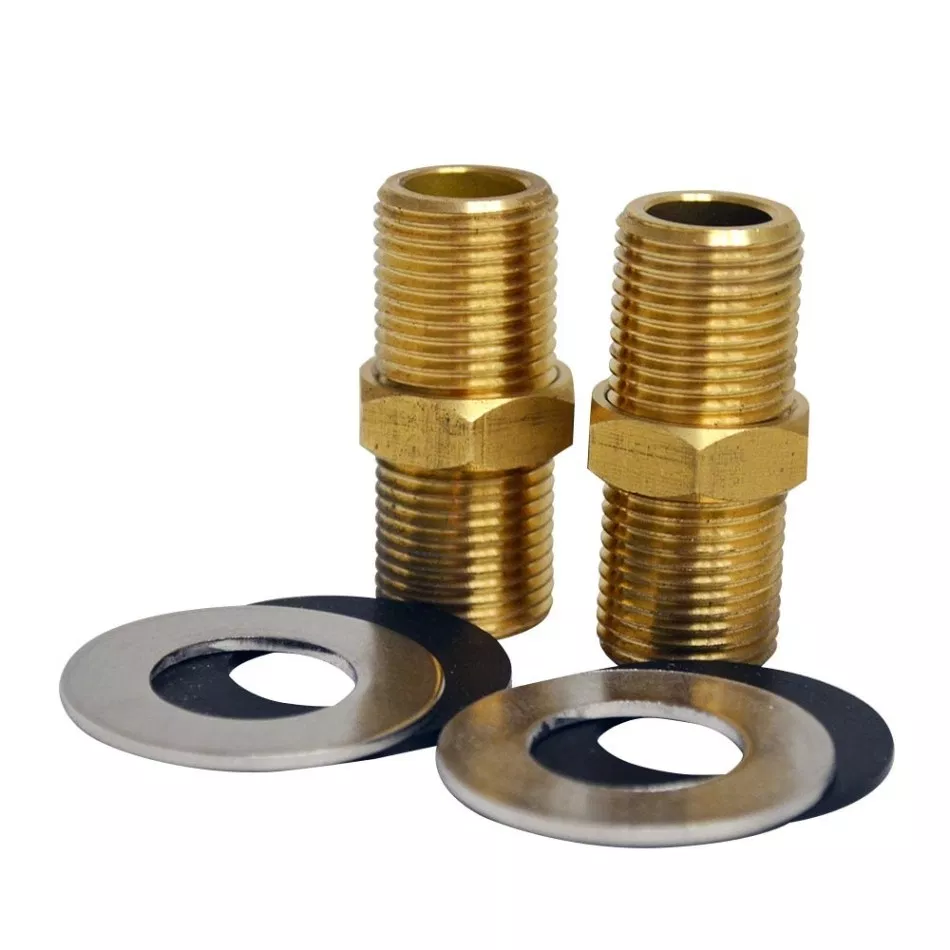 The scenario you've described is not ideal. The faucet was manufactured to a sub-optimal design. In this case, you must either select a different faucet, or improvise. Chicago Faucet has been using this same type of design on their wall and deck faucets for many years. They use an adhesive on their straight threads from the factory.

Your alternate choice is to select a different faucet.

I use a product called "LeakLock" it comes in a tube and is a blue paste, like teflon paste only much better, this stuff seals everything from refrigerants to water to gas, any pressures, available online or at appliance parts stores and HVAC parts houses, like Jonstone supply, Standard Appliance Ebay and Amazon sell it too.

Not the answer you're looking for? Browse other questions tagged plumbing faucet pipe sink or ask your own question.

6
How to connect a faucet to a buried water line?
0
How can I attach a garden hose to my sink faucet?
0
Replacing kitchen faucet, unsure how to remove old plate holding hoses
1
In which direction do I unscrew this utility sink faucet to replace the washers?
3
What is this thing that holds widespread bathroom faucet handle to sink? How do I tighten it?
0
Is there some official or standard specification for an EK20 fitting?
0
What type of adaptor do I need to connect a female 3/8 OD faucet to this shutoff valve?
0
What are my options for connecting my water filter to my faucet?
0
MIP threaded pipe in NPSM female threads