Is it safe to remove/trim jack studs to make a door opening wider?

We purchased a very expensive (at least for us 5,000+) entry door pair as replacement for an existing single door and sidelights. Today when the door contractor came to install the doors the opening was too small by 3/4 of an inch (the door contractor had measured for the doors prior to purchasing, these were custom made doors and are fiberglass that look like wood with full light beveled glass).

They suggested removing or cutting down the jack studs. I am not comfortable with this. Is this a good solution? This is a load bearing wall. I have postponed installation to research this. Advice?

For high priced custom doors, you deserve to get it right. 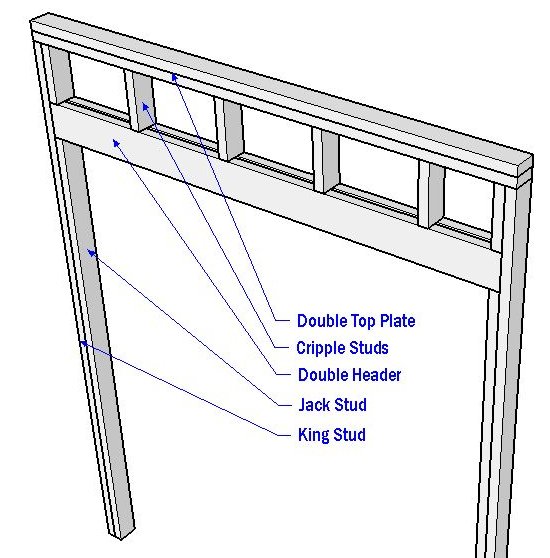 If the jack studs are cut down, they probably need to be cut more than 3/4 inch total to accomodate shims to square the door in the opening. If you take out only 1/2 inch on each side, you have reduced the jack stud by 33%. If this is done in place, you are also stressing the remaining structure of studs, header, etc. in sawing out the excess.

It could be that the overall framing is overengineered enough to survive this assualt, but it is risky, violates most building codes and is a bad way to start a good project.

I would insist that they measure thrice (three times instead of the recommended two) and bring a correctly sized door.

P.S. I had a similar problem with a custom tempered glass shower door that I had waited eight weeks for. They played with cludging it for about a minute and then took it back for a correctly sized piece. It hurts but it is worth it.

Don't to it! Somebody made a mistake and it wasn't you, don't let the contractor take the easy way out at the expense of weakening your home's structure!

It may be that the contractor measured wrong, or put the wrong measurements in the order. It could also be that the order was right but were manufactured wrong, or you were sent someone else's doors! Insist on getting a copy of the order from your contractor. If they ordered correctly then the manufacturer is at fault and should replace the doors with the right ones. If your contractor measured or ordered wrong then they are negligent and should order a replacement. If you let them weaken the structure of your home in order to let someone off the hook and make their lives easier the only loser is you!

It's easy to say they mis-measured, make 'em fix it. That's not everyone's reality. There are alternatives that may be preferable to someone (not you!) buying a new door. Hacking the jack studs with a sawzall is NOT a viable alternative, as everyone has said.

You could re-frame the entire opening with a longer header. Or you could remove the jack studs and install metal beam hangers in their place, but additional king studs would possibly have to be installed to maintain adequate support, so this is almost as much work as a longer header. It may be possible to engineer an adequate jack stud support using thinner LVLs. I like this last idea, but not sure it will really work.

Ensure this is a bearing wall. Things are much easier if it's non-bearing.

It's easy (and important) to criticise, but what's truly helpful is offering viable alternative solutions :)

I do framing work, some time people in this line of work make mistakes. In this situation I re-frame the opening and do the job right. I usually don't make any money on this type of job but I will get a good customer.

0
Is it safe to remove 2 "extra" jack studs to make a 60" wide door opening wider?
4
Door jamb wider than wall
2
Brand New French Doors Installed By Contractor.. Leaks same day. Is this normal?
2
Are these doors installed correctly, and are they secure as they are?
0
Door Opening No trim
0
What to do with gap between cut baseboard/shoe moulding and new wider door trim
-1
Is it possible to seal an interior barn door to provide an acceptable level of insulation between a conditioned and an unconditioned space?
1
Adding Locks to Antique French Door
0
Rough opening is too small for sliding patio doors
1
Door weatherstripping gap after new door install