How can I tell if a breaker uses both phases/legs

I hooked up Sense monitor by adding a 240v breaker to my panel (bottom 2 slots on one leg). Problem is Sense has detected that my breaker is sitting on two slots that occupy the same phase/leg of the panel.

How can I tell of there is 2 slots in the electrical panel that will occupy both phase/legs so that Sense will work properly? From reading I suspect Sense monitor power needs to be connected to both phases/legs. 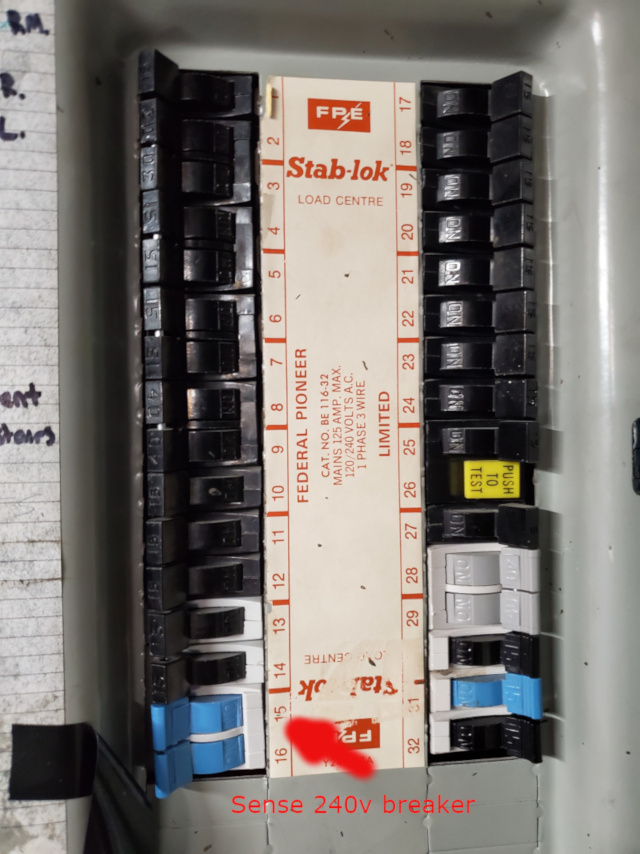 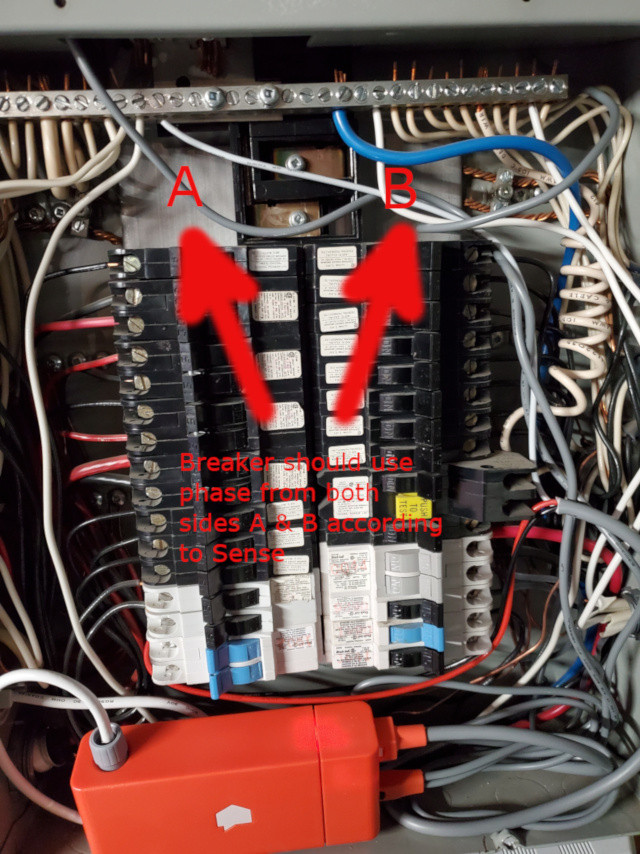 Stab-Lok is a PROBLEM

See, for example, What can I do about a breaker that trips frequently on a Stab-Lok panel?

So first read up on Stab-Lok, post a picture of your panel (the pros will recognize it and tell you if it really is a fire hazard, etc.) and determine if this is a concern. If it is a real concern, then dealing with replacement is a much higher priority than hooking up the Sense monitor.

How it SHOULD Work

On many panels (I don't know if Stab-Lok is supposed to work this way or not), a true double (240V) breaker will always hit both legs. The exception is a double-stuff breaker, where it is really two-breakers-in-one. In that case, it normally only hits one leg, and the exception is if it can actually be 1/2 of one leg and 1/2 of the other leg. But that, as I understand it, is only on certain panels where you can have a quad == 4 in one, but really 4 in 2 - i.e., a double-space breaker that has 4 individual breakers, two on one leg, two on the other leg, with the result that the inner breakers can function together as a "double 240V breaker".

FIRST FIGURE OUT THE STAB-LOK!

The answer from manassehkatz (not related, but we do know each other :-) ) is very important, but it doesn't actually tell you what you want to know.

If you have a voltage meter or multimeter, you can very easily find out whether the poles of this breaker are on the same phase or different phases. (Important: if you are using a multimeter, make sure it is set to voltage measurement, not one of the other settings, before you touch the probes to anything.)

To test, touch one meter probe to one breaker terminal and the other probe to the other terminal. If you read 240v, you are properly on both phases. If you read 0v, you have both on the same phase. You can do this same test on other two-pole breakers too to see what it should look like.

I did manage to figure out the Sense problem by looking at the specs diagram for the panel. It showed a set of 2 poles with one that used phase A and another that used phase B.

Sense issue is resolved but now I need to get this panel looked at and replace if electrician states it is a problem/fire hazard.

2
What can I do about a breaker that trips frequently on a Stab-Lok panel?

1
Do I need a ground for a new 240 volt 20 amp circuit?
1
old 230 volt transformer style arc welder on an old square d 125 amp panel
0
Is the subpanel installation in a detached garage correctly done?
1
240 volt biphasic to 240 volt monophasic
5
Adding the Sense electricity monitor to my breaker box
4
Does the arrangement of breakers within a panel matter or follow any rules?
9
Can you use a 2 pole 2-slot wide breaker to provide 240V?
4
Alternatives to replace tandem single pole MWBC breakers?
5
Does it mean that I have a bad service neutral when putting load on one of the legs, causes voltage fluctuation at the mains?