How can I install a pre-hung door when soundboard has been installed?

I know that I can custom-order pre-hung doors with this jamb size, but is there way to cleanly install a standard 4.5" jamb?

Should I install flush to one side, leaving the half inch and add a moulding to cover it?
Should I split the difference to 1/4-inch on both sides?

One approach is an oversized pre-cased, split-jamb door. These have casings (room side moldings) pre installed to the jamb and are attached separately from each side. The joint in the middle is hidden by the stop (the molding that the door actually rests against when closed). This is a home center site describing the process.

These doors probably would have to be special ordered and cost more than standard prehung doors. An alternative is to create your own jambs using standard clear boards. This does require some skill with either a chisel or router, but is not beyond the skill level of a fair DIY carpenter.

You could also install a standard pre-hung door with the jamb on the hinge side flush to the outer edge of that wall. This will leave the other edge of the jamb about 1/2 inch recessed, the thickness of the soundboard. Just putting a narrow piece of board the same thickness as the jamb would work (there is no structural issue). However, butt aligning boards generally does not look good - the edges shift slightly and it always looks like an unintentional (or unprofessional) joint. The standard way to solve that is to create a reveal. This is a small step in level between two adjoining lengths of wood.

You could put in a simple square edged molding (or thin strip of board) that is set back from the inner edge of the jamb opening about 1/8 to 3/16. If the soundboard is tight up against the jamb (it really shouldn't be, but sometimes is) use a board/molding slightly thinner than the jamb. Other wise, just slid it back a bit. Then when you measure for the casing. create a second small reveal set back from this filler strip.

Another, simpler, but less elegant approach, is to use a backband or cap type molding. 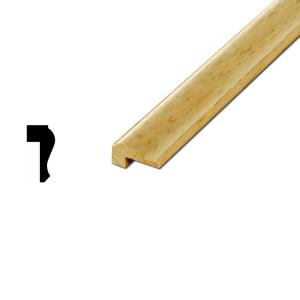 The one illustrated is a bit deep, but you can probably find one smaller and simpler.

Putting the shorter edge on the outside edge of the short jamb with the thin edge overlapping onto the inside edge of the jamb. Then nail the casing agasint the cap/backband. Becasue the door opens on the hinge side, this inset molding should not interfere with functionality.

I've done this in a similar situation.

Rip some 1/2 by 1/2 strips of whatever you have. Glue them to the inner edge of the casing you are going to use. Use a jointer or a plane to make the two pieces flush.

Like Bib says, a split jamb door will do it. I bought one a few weeks ago and it was split jamb. I think most are that way now. It didn't cost extra. So it simply slides to the thickness you need. It even had the casing already around it too. So the first thing you do is split it into two halves, mount one half by attaching to the casing, then adding shims inside the jamb, then slide the other half into place.

Not the answer you're looking for? Browse other questions tagged doors framing finishing door-frame or ask your own question.

4
How do I install a pre-hung door in a rough opening that's too wide?
2
How should I install slab doors when the jamb has been drywalled over?
0
How do I adjust for a door jamb that's thicker than the wall?
1
Installing door in 2x6 wall (drywall only on 1 side)
7
How can I choose the best lag screw / lag bolt?
2
Are these doors installed correctly, and are they secure as they are?
1
Prehung Door Question
0
Extending door jamb
2
how to properly hang door when wall is far out of plumb?