Flipped off main breaker for repair, unrelated circuit will not come back on 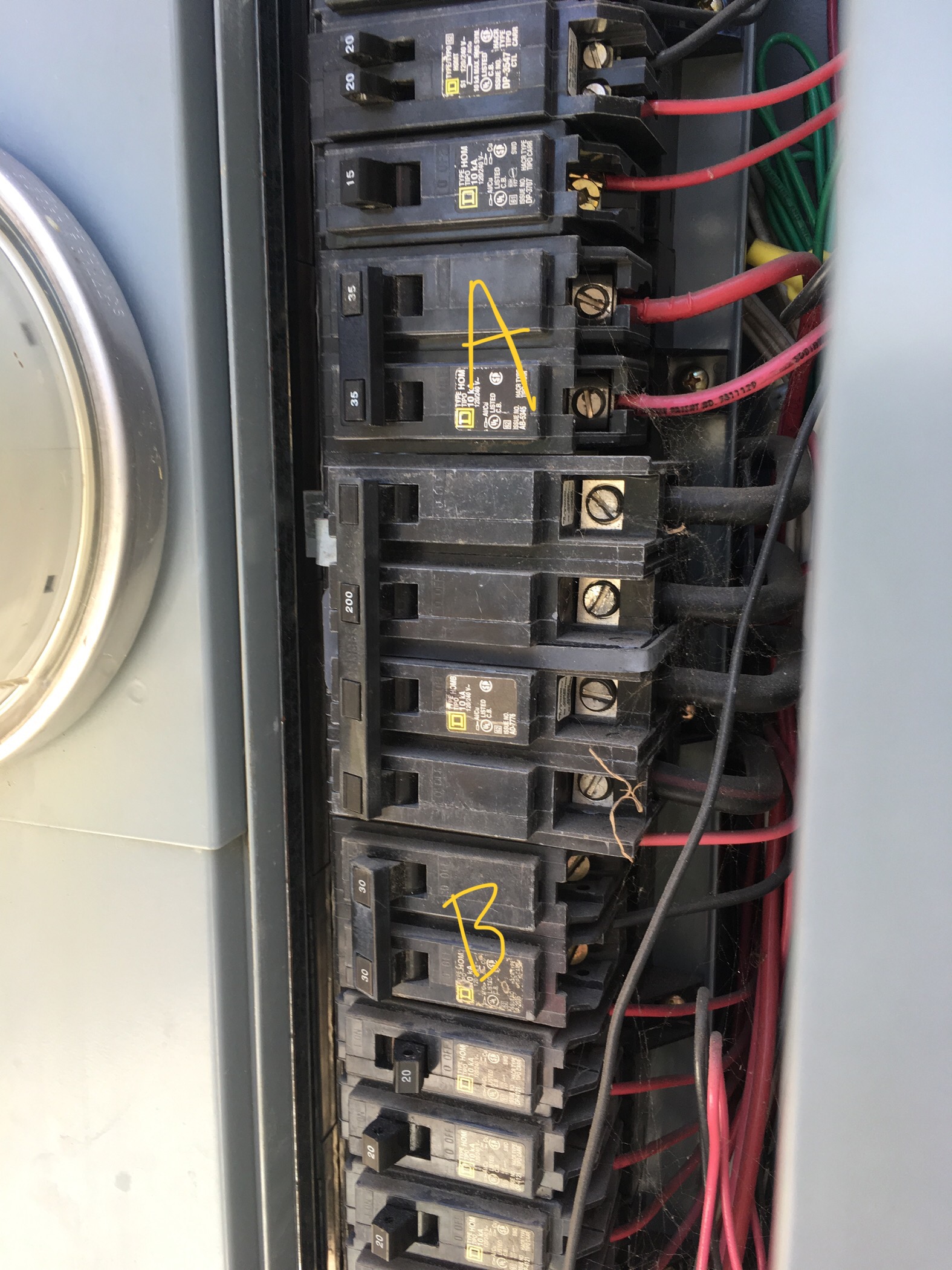 Switched off main to attach ground wire to two outlets in garage (one normal, one GFCI), now separate circuit to attic (feeding one overhead switchable light, one receptacle, doorbell, and AIR HANDLER) will not power up. Breaker is on (not tripped). I have switched off each individual breaker in box, then main off and on, then each individual back on, still nothing. I have tested breaker at panel, each side of 220v breaker reads 120V when breaker is on, 0v when breaker is flipped off. Conduit run into attic (before branching to switchable light, receptacle, and air handler) is not hot, with breaker in ON position. Have not tested for continuity yet. Suggestions?

"B" in photo is breaker/circuit in question

There seems to be some confusion as to the issue I am now having. The initial problem was a shock coming from an ungrounded, non-GFCI outlet in the garage, to which the amp was plugged in. THAT receptacle was downline of a GFCI receptacle, which also had no ground wire attached. I shut off the main, attached ground wires (that were already present in the outlet boxes), and now there are no issues in the garage. Amp/guitar no longer shocks. When I turned the main back on, that is when I had a new problem in the attic, a different location in the house (with one receptacle, one overhead light on a switch, and the HVAC air handler), which does not include the receptacles in the garage, which are currently operational. Tonight I will test every receptacle in the house, and report back. As for the breaker/amp issue, @Harper I can just switch the main off and replace the 30a breaker with a 20a, and the light, receptacle, and air handler will function properly, assuming there are no other issues?

Conduit run into attic is not hot - how are you verifying that? Try an NCV to see if it's a lost neutral. I'd be looking at the neutral bar, because unless you flipping the giant breaker caused the connection to fail at the load center, wherever you did new work isn't as separate a circuit as you thought. Put it all back to the way it was to help isolate the problem.

I suspect you lost the neutral when you ad-hocked some GFCIs.

Losing both sides of a MWBC at the same time would be highly unusual if the breaker works. Trace the neutral.

You dropped the main... Check for any other GFCIs in the entire house that aren't reset. Especially one that might be hidden somewhere and is just two buttons (no outlet).

And that's a no-no. So change that breaker to 20A.

This may have allowed an overload condition. Something we see all the time is a circuit that goes dead after someone puts a 10-15A load on it - the wire connection at a receptacle or switch has "burned out" (open). It is typically a backstab connection burning out, which are notorious for this. Anyway, I suspect that you may have pulled 20-30 amps, which is much more likely to burn out a receptacle connection. This could happen either at the last working outlet or first failed one.

Is the receptacle downline of the GFCI? If so it is probably not wired on the "LOAD" side of the GFCI because of the multi-wire branch circuit. That would explain why it shocked you. If you connect the amplifier downline of a GFCI, it will trip to save your life. This is called a "nuisance trip".

As far as the amp shocking you, the root problem is the amp is faulty. GFCIs will fix that in terms of protecting you, but they won't fix it in terms of the amp being still usable because it will just GFCI trip. You will still need to have the amp fixed if you want to use it.

0
Subpanel installation breaker size: is it big enough?
4
Where should I connect the green ground wire in main panel next to meter?
0
What to put in 60A GFCI breakers in Subpanel?
2
What type of Circuit Breaker is required for this slot?
0
No power to garage
1
Campground sub panel grounding question
0
240 v. Problems to the other garage