How to laser-level close to a surface

Many self-leveling lasers, including my Bosch GCL 2-160, have a limitation when used to level a ceiling or a floor: the horizontal laser beam often cannot get within several inches of the ceiling or floor due to where the laser emerges from the device.

This really slows things down for me when trying to grind down a high spot in a concrete floor, or trying to shim the ceiling strapping. My workaround typically involves getting the laser as close as possible to the surface I'm trying to level, and then using a tape measure to sample the distance from the laser to the surface at a bazillion different locations.

A good ol' scrap block of two-by does nicely. Just set your laser 1-1/2" above your slab height and kick the block around as you work.

This doesn't work for ceilings, of course, but hopefully you have fewer points to measure in that case. You'd have to use something with a suction cup or magnet otherwise.

That's actually the way one normally does such things, and has been since before there were lasers, other than one normally uses a rod rather than a tape for more consistent results. You establish a reference plane (Generally not going to any great lengths to try and get it super-close to the surface you are working), measure in a grid, and mark high spots for grinding (and/or low spots for filling.)

During the work you may use a marked stick rather than a graduated rod, where the stick is marked for the distance from the reference plane you are trying to achieve, so no math is needed, just a check against the stick to see if you are at the mark yet.

For typical floor or ground work, I generally keep the reference plane up around 30 inches, so I don't have to crouch way down to check, I can just bend over a bit and clearly see the mark. Putting it inches off the floor would be painfully annoying to work with, IMHO.

Use a 2x2 of any suitable height. Pre-drill a hole in it (so it doesn't split), then screw in a lag screw about half its thread length. The lag screw goes down, to touch the surface being measured.

Then mark a line on the 2x2 at the appropriate height so the laser hits it right on the mark. If you find your mark is not quite in the right place, turn the lag screw in or out until it is.

If the laser is near the floor, you can also use it as a pass/fail, because either the laser will hit the bottom of the 2x2 (high enough), or it will not (too low).

I have built myself one (it took me several attempts), but it depends on how your laser works. Mine is basically a cylinder (blue) with a rotating head on top (it can also be rotated 90° but I rarely need that), with three bubble levels on the sides and screws (green) to adjust it. I place it on the floor, adjust it until it's level and then a small rotating head (red) reflects a laser ray all around, creating a flat "plane" at about 10 cm from the ground, which as you say is really awkward (why they didn't think to put the rotating head below is beyond me).

What I did is I took a Plexiglass disc (fuchsia), with the legs drilling through, so that it's flat against the cylinder and coplanar with the laser. A second disc is mounted on top with three clear Plexiglass columns. All around the upper disc are several small mirrors at an angle of 45°, that reflect the laser down. And the second disk also holds several small mirrors that reflect the laser horizontally. My "laser plane" is now about one millimeter from the ground. Actually it's no longer a plane, I have two "fan" interleaved planes at about 10 cm distance. 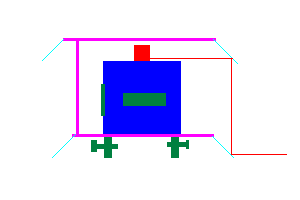 (I have long hoped to find two sections of conic chromed steel cylinder with an angle of 45°, or two steel dishes or bowls with 45° sides, to replace the mirrors with a continuous construction (thus getting a whole plane at ground level instead of two "sliced" planes), but wasn't able to find them anywhere. I've also thought I could try and build myself one with thermoplastics, but for my needs, the small mirrors are enough. The only drawback is that now it's difficult to reach the adjustment screws with my fingers, and I now need a screwdriver).

I don't know about yours, but on mine you can turn off self-leveling.

With it on, make two marks. Turn it off and then align it where you want it, equidistant from the two marks. This takes some trial and error. Use a tripod. Adjust where the laser is thrown by moving the feet ever so slightly.

If you've got money to burn (or do like I did and pick one up at a flea market for a great price), Bosch makes the GSL 2 floor laser. It shoots dual lasers specifically to level out floors.

This video shows it in use and also shows it compared to the Reference level technique at the 2min mark: https://www.youtube.com/watch?v=1dBgheQYjhY

Not the answer you're looking for? Browse other questions tagged ceiling floor tools self-leveling-concrete leveling or ask your own question.

7
How do I use 'surface shims' to level out a sloping floor?
5
how do I level PAINTED concrete floor?
1
Basement floor leveling guidance
1
Best way to cover basement tiles containing asbestos
1
Best method to level 1x3 strapping to ceiling joists on a slope?
10
Filling in a sunken living room to level of other floors
2
How to check if joists are on plane?
1
How to level a concrete fountain base on a concrete surface?