Is it normal to have your load bearing wall not line up with your basement support posts and joist?

I am looking to do a pass through in my kitchen, and I was looking to confirm in the basement if everything lined up nicely for the 5-6' header I was going to put in. I noticed that the wall (load bearing) is not actually over the basement posts and joist but about 1 foot away. Is this an okay / normal occurrence? 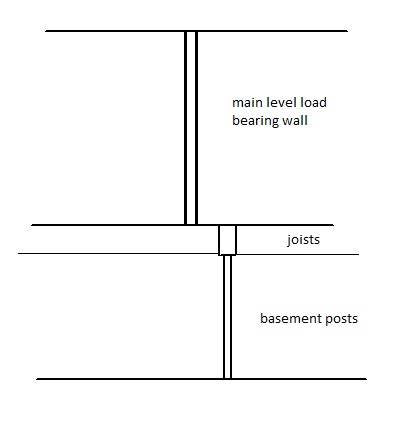 Yes, it’s acceptable to have bearing walls NOT align vertically, provided: 1) the walls are less distance apart than the depth of the joists, or 2) the side that has the upper bearing wall rests on a considerably shorter span, 3) the load is accounted for in the design of the joists.

1) If the upper wall is slightly off center, the upper load will transfer at about a 45 degree angle vertically down through the joists.

2) Usually all the floor joists are the same size (and spacing) throughout the house. The size is based on the longest span, so the shorter spans are “over designed”. Therefore, if the upper load bearing wall rests on a set of joists that have have a much shorter span, it’s probably ok, as long as it’s not in the middle third of the span or the load is minor.

3) Often we’ll just calculate the loads and verify that the joists are not overloaded.

Not the answer you're looking for? Browse other questions tagged basement load or ask your own question.