I'm looking to replace a light switch. Upon opening up the switch, I'm greeted with this: 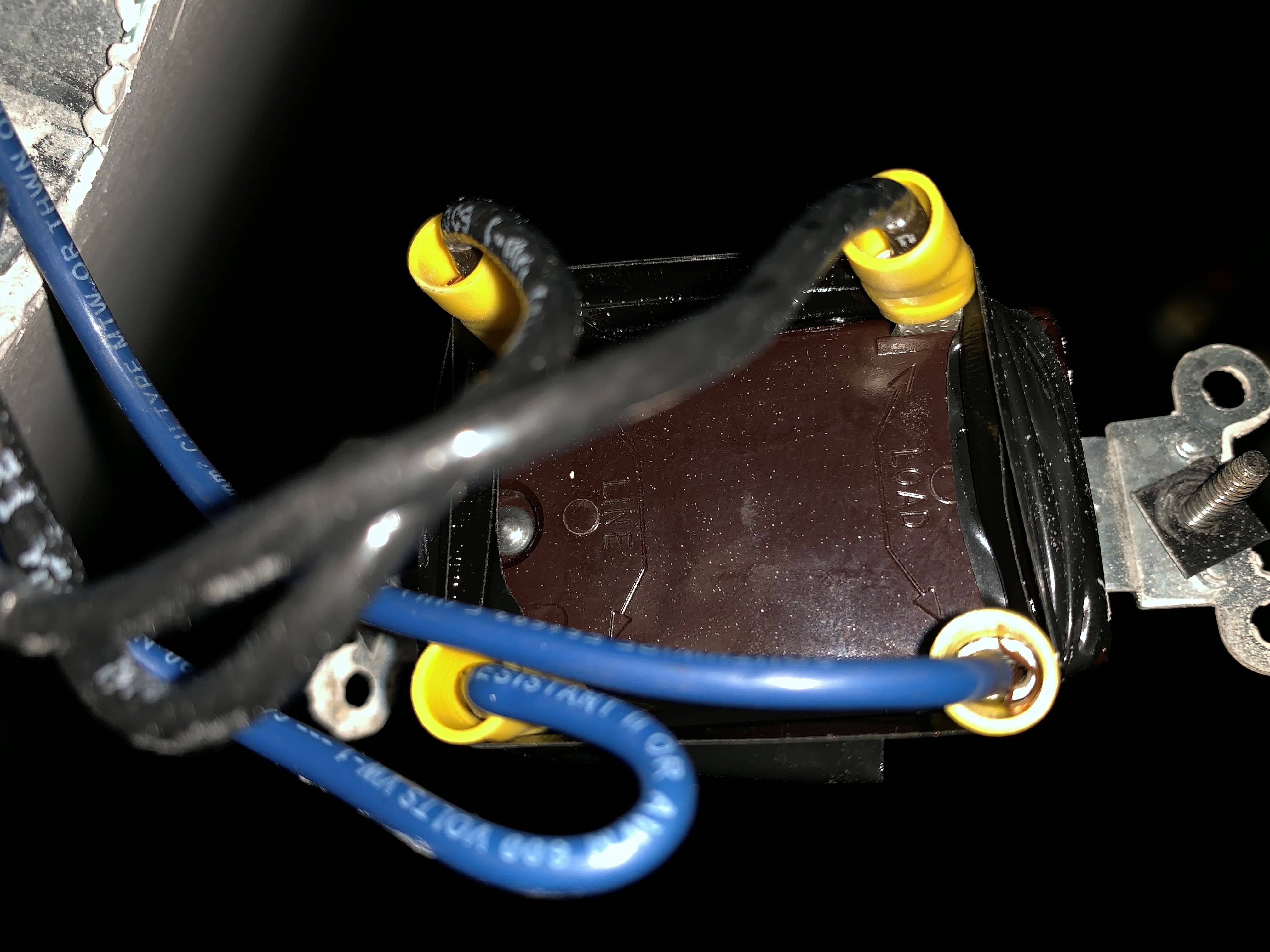 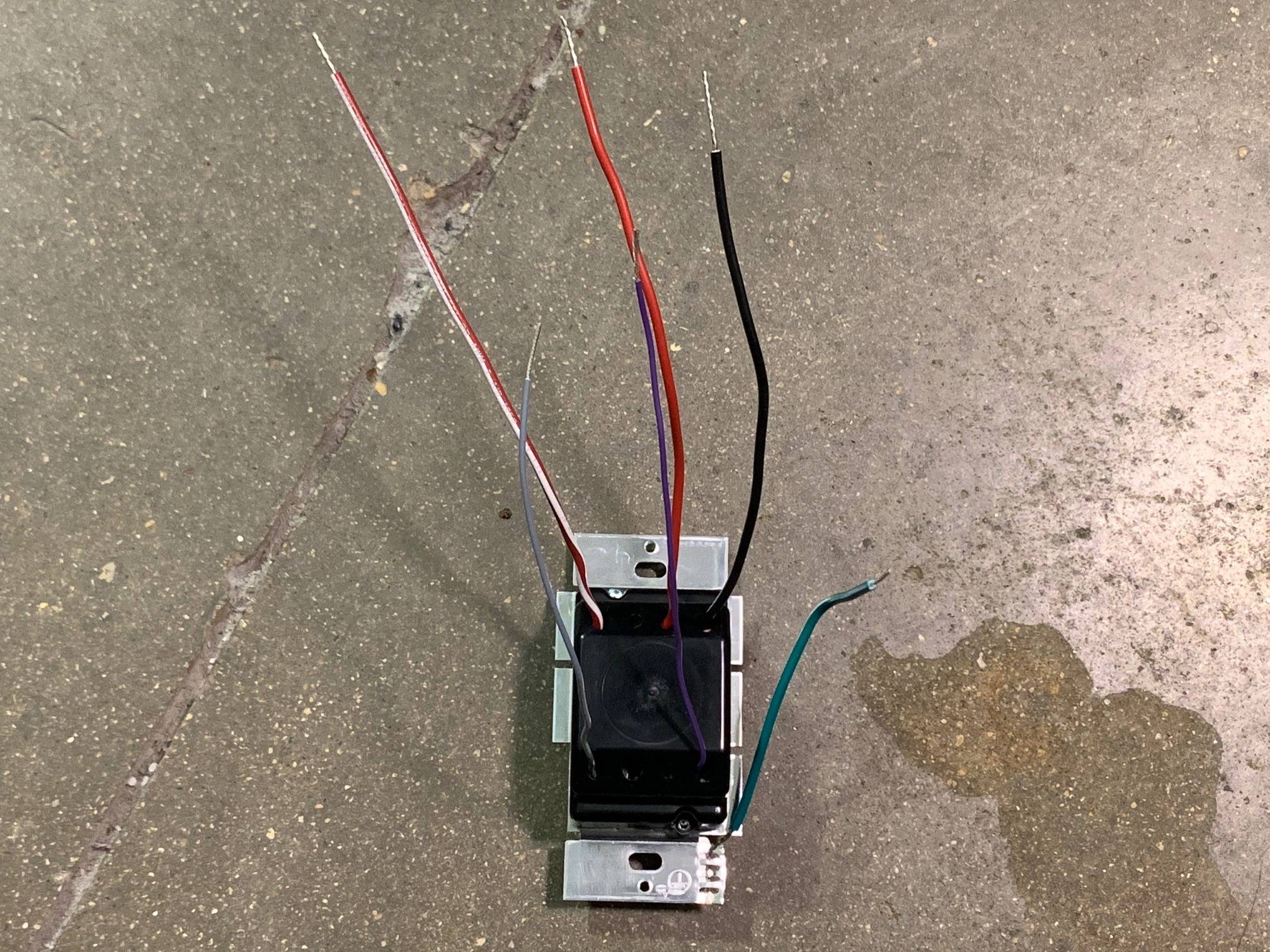 For context, this is a commercial in-conduit wiring. I want to replace my HPS lights with dimming LEDs, hence the additional purple and gray wires on the new switch.

Any help is appreciated. Thanks in advance!

Edit: I opened up the junction boxes in line and here's the wiring:

This junction box is directly in line with the switch: 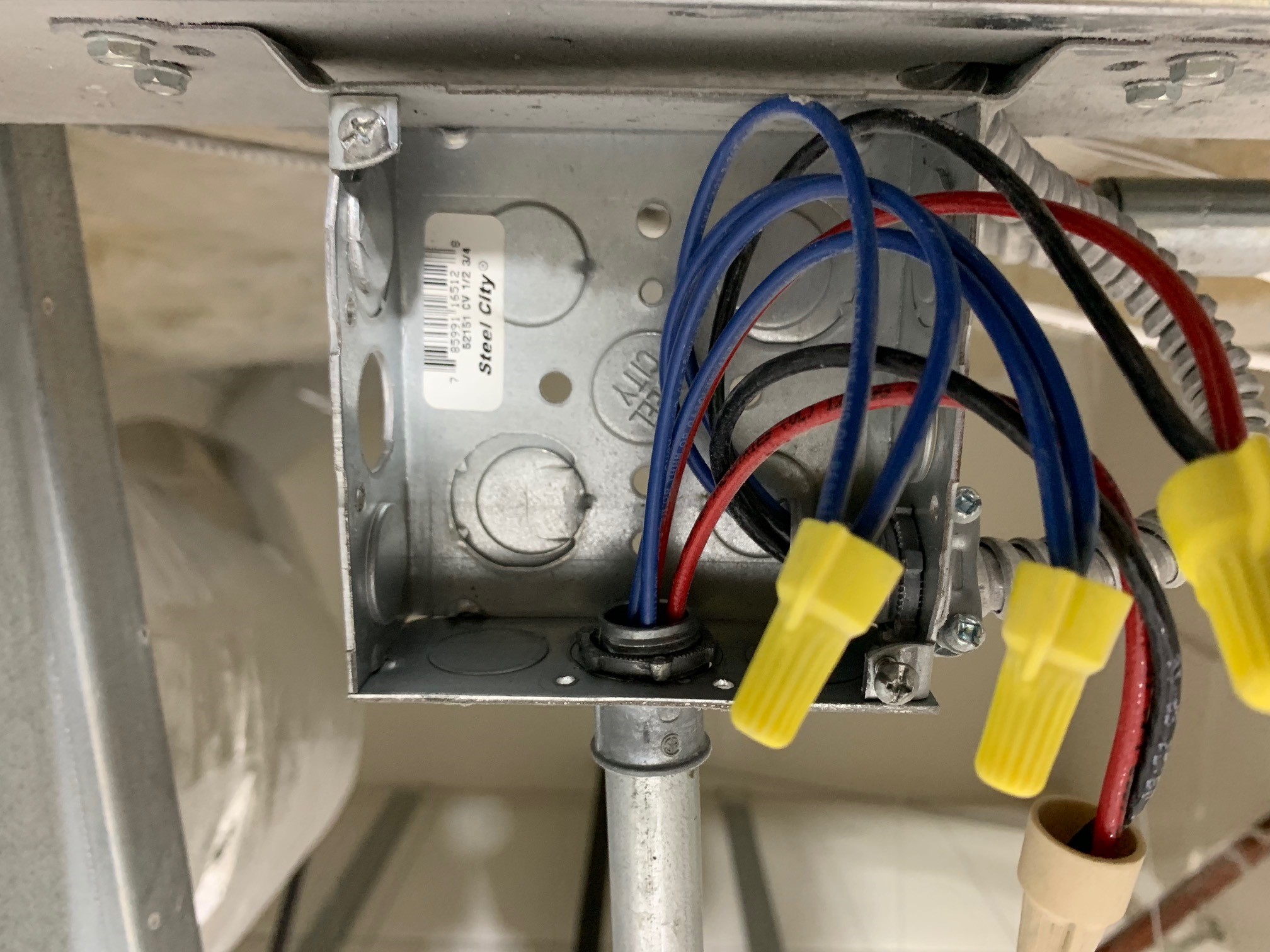 This is the junction box the first light is hanging from: 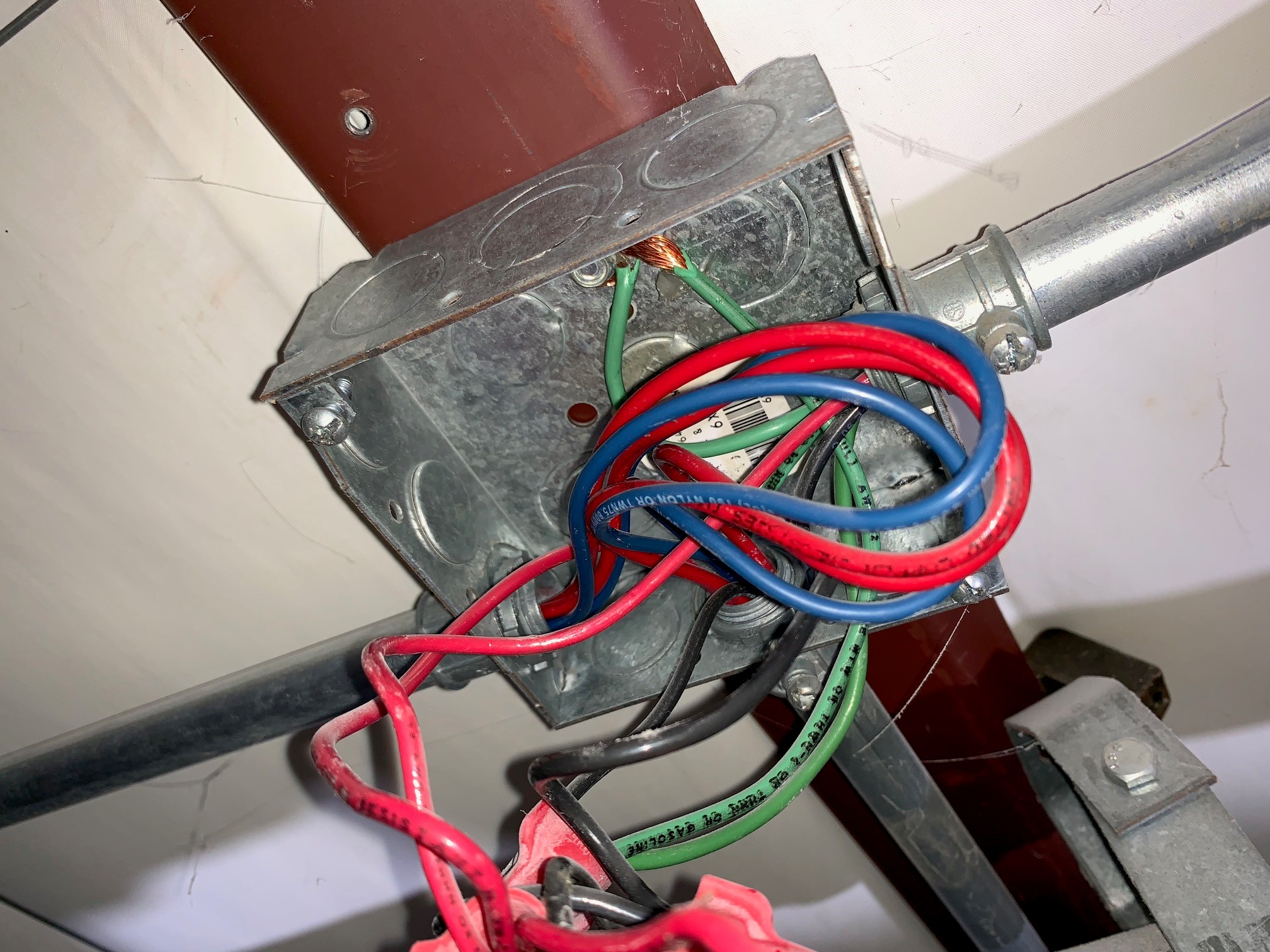 And this is the junction box furthest from the switch: 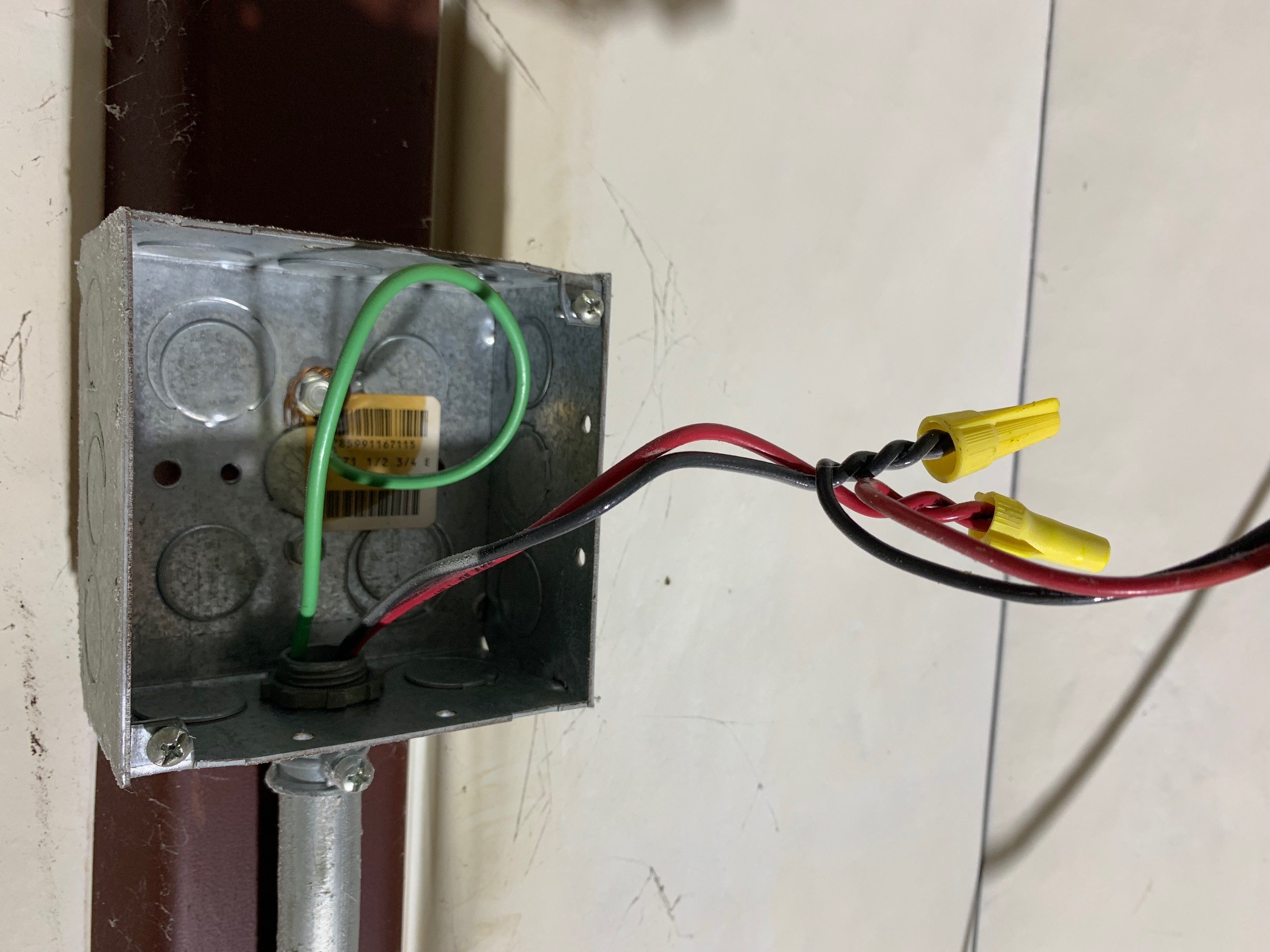 And as requested, a picture of the breaker: 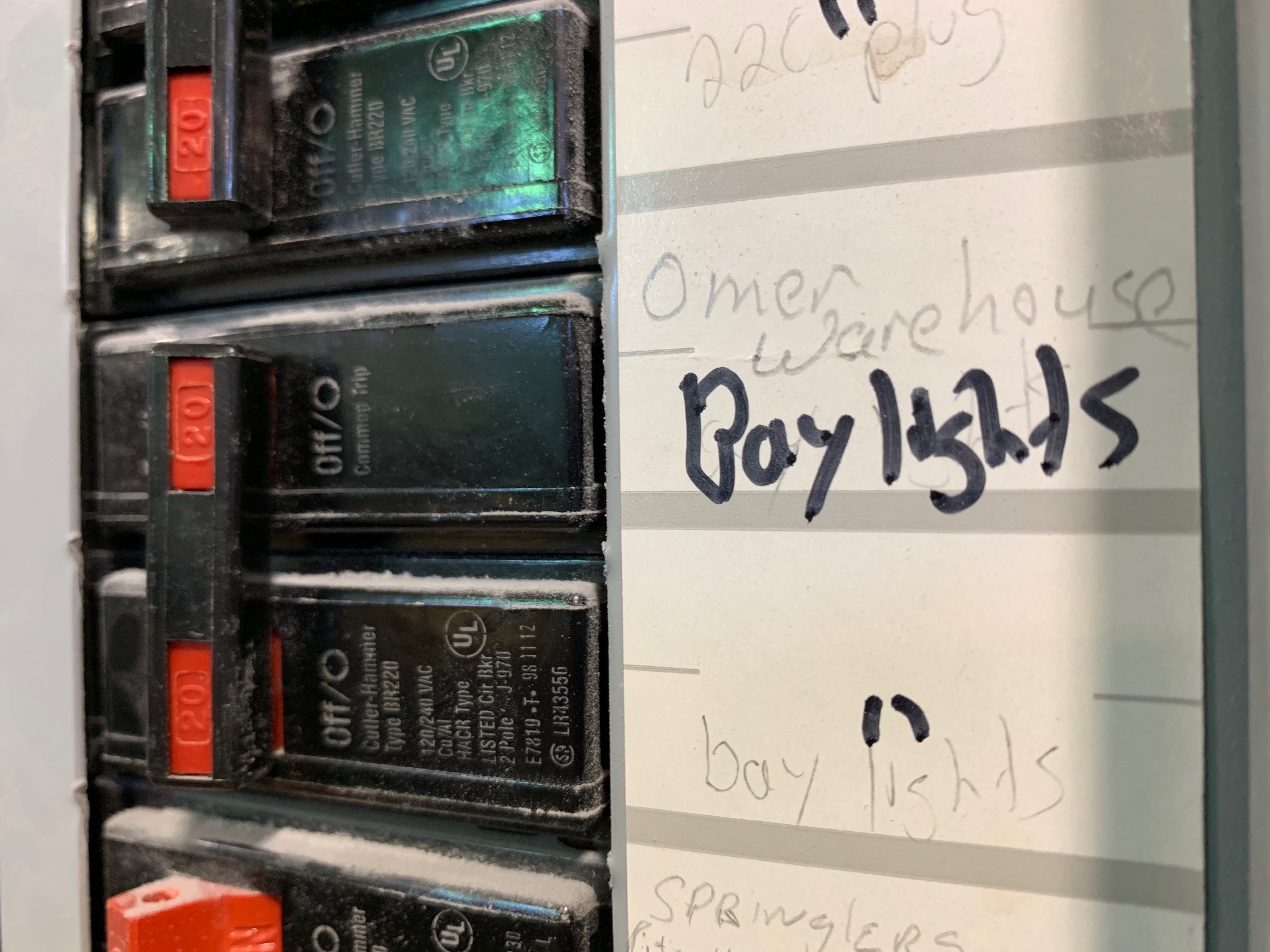 There are four HPS lights that this switch controls.

You need to switch both poles

NEC 410.104(B) requires that the switching device for a discharge-type fixture (and I would consider LEDs to be analogous to discharge-type fixtures, due to the light module and driver typically being separate units) switch all ungrounded conductors going to the ballast/driver (or "auxiliary equipment" in Code parlance):

(B) Switching. Where supplied by the ungrounded conductors of a circuit, the switching device of auxiliary equipment shall simultaneously disconnect all conductors.

Never fear, the relays are here!

However, there is a not-terribly-hard solution to this problem using a single additional device to go with your DVSTV; namely, a Functional Devices RIB2402B2G. This mounts into a 3/4" knockout on the switch box (and sits outside it, as it's a fully enclosed device), is fully UL listed, and is rated to control 16A of electronic ballast or LED lighting load. You will need to cut the existing crimp terminals off the line and load wires in the box and re-strip the ends, by the way, as both the DVSTV and RIB2402B2G are wired using their built-in pigtails instead.

The wiring in the switch box with the DVSTV and the RIB2402B2G goes as follows:

The way this works is the DVSTV consists of two parts: a 0-10V controller (connected to purple & grey) and a bog standard 3-way switch (connected to black, red, & red/white). The 0-10V controller in this case directly controls the drivers, while the 3-way switch normally would switch the lighting loads on and off. However, we use the switch in the DVSTV to turn on and off the coil of the RIB2402B2G relay, which in turn switches all the ungrounded conductors going to the lights on the DVSTV's behalf.

Adding ballast disconnect connectors at the fixtures at this time not only may be required by NEC 410.130(G)(1) depending on your AHJ:

, but is a good idea anyway to allow individual fixtures to be safely serviced, even though LED fixtures will likely require less servicing than their electric-discharge (fluorescent, HPS, etc) counterparts.

Your current circuit is 240V split phase, which means both wires are hot and there is no neutral. Therefore, to switch it on and off, both hot wires need to be disconnected together. Your switch is only capable of switching one of them.

Simplified image of your current wiring, with colors re-marked for consistency:

I can think of two possible solutions:

Use another dimmer, in addition to your current switch. Your switch is really two devices in one -- a switch to cut power to the lights, and a signaling device to tell the lights how much to dim. However, there's no reason these two devices need to be combined. You can keep using your current two-pole switch for the on/off function, and get a dimmer that only has the 0-10V dimming function (Example) -- it will only have the purple and grey wires. You don't need to put it next to the current switch, though you will probably want to for convenience's sake.

Since your new lights use much less power than your old ones did, you don't need the extra power that a 240V circuit provides anymore. One of the current hots can be replaced with a neutral wire, and then the combination switch/dimmer you bought will be compatible. However, since NEC doesn't allow re-labeling wires at this size, you would need to pull out one of the current hot wires and replace it with white or grey wire. At the breaker panel, the remaining hot will land on one side of the breaker (or replace it with a single-pole breaker), and the new wire will land on the neutral bus. Then, at the switch location, simply wire-nut the neutral wires together.

Diagram of wiring re-configured for 120V: 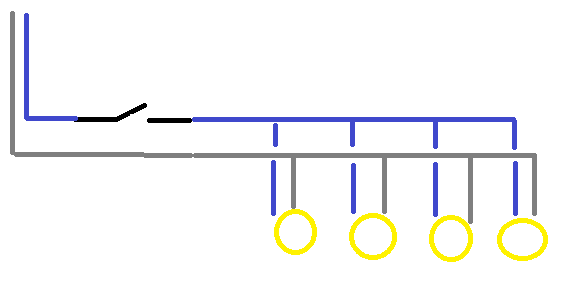 Separately from all of this, you'll need to run dimming control wires to each fixture. Check the labeling on the fixture to see whether you can run the wires in the same conduit as the power (Class 1 wiring) or if you need to use a separate wiring method (Class 2).

Not the answer you're looking for? Browse other questions tagged electrical wiring lighting led or ask your own question.