I am remodeling my bathroom and replacing the old HVL with a new Broan 100HL. Rather than use the Broan switch which has 3 switches in 1 gang, I am using a standard switch and a combo switch. I'm not sure my diagram is correct. Would a hot wire need to jump over to the combo switch? It seems to me that the combo switch won't have power in from the panel, therefore it would not have a circuit to break. I'm thoroughly confused and would appreciate any help! Thanks in advance!! 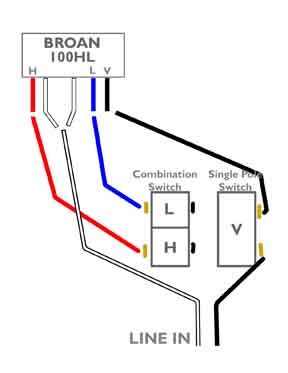 Since the three switches & devices are all in one circuit, they need to share hot (panel to the switches) and neutral (from the devices back to the panel).

If there is no jumper/bridge between the two hots on the double switch, then connect three short pieces of black wire with a wire nut to the hot wire that you removed from the vent switch. Connect on to each of the 3 switches (vent, heat & light screws of double switch).

Based on your diagram, you appear to be using either separate wires in conduit or a /4 cable - black/white/red/blue, and joining the two separate neutral connections of the HVL together to the white (neutral) wire going back to the panel. If so, that's fine.

However, if you actually have two separate cables - one black/white from vent switch and one black/white/red from the double switch then you have a bit of a problem. Each neutral in a cable has to match the loads in the cable. Based on the diagram, the light & vent (which each typically use < 100W) share a neutral and the heat (typically ~ 1500W) has its own neutral. You can't mix & match neutrals. Either they all get combined and the neutral wire runs next to all the switched hot wires in conduit or in a single cable, or then must be kept matched together. To keep them matched together in cables, the white (neutral) for the light & vent must be together with the switched hots for those devices and only combined together with the heat's neutral in the switchbox - not combined at the device.

You're likely violating local building codes and the NEC with this. If your bathroom is 100% supplied by a single branch circuit then your upgrades must split this into two separate circuits unless a very specific set of circumstances exist here... with this device you are prohibited from installing it if that condition exists..

Have you pulled a permit?

Have you read the installation guidelines from the manufacturer?

This fixture CLEARLY states it must be installed on a separate 20A branch circuit.

If this is the typical bathroom remodeling job I'd advise you to immediately STOP and assess the existing branch circuits and before you proceed, you must fully understand the codes and rules designed to protect you and your family (and subsequent homeowners) from installing this dangerously inappropriately.