Temporarily moving 2 walls off of a slab

The very quick backstory is that in order to remain grandfathered to retain my current setbacks (i.e., too close to property line and alley), I must retain those 2 original walls of my garage. I intend to pour a new slab over the current one since it is too low anyway and expand it in the 2 directions I am able at the same time. Our inspector said I could lift the walls in order to do that as well as replace the sill plates, which are surprisingly solid, at the same time. To make pouring much easier, I intend to just move the walls a couple feet off the slab and move them back when new slab is ready.

My question is how to do this in the simplest manner (i.e., both time and expense wise)? My current idea is sketched below. The walls are approximately 19' and 18'. Total weight would be around 1100-1200 pounds since exterior sheathing would remain to prevent sagging. My thought is to use my 3-ton wheeled car jack and lift as close to the CG as possible (the up arrow in the sketch). Thus, I'd bolt some ledger boards to the walls (studs are 30-32" o.c. - I will be adding more!) and then bolt a braced 2x10 across the diagonal (should be 13-14') where it would connect just inside the midpoint of each wall since if anything I want the corner to lift before the ends. I'd have a person at each wall end to do the fine balancing as needed. Then basically walk the jack back a couple feet and set the wall down on some concrete blocks. That would be on the neighbor's property but I'll get approval from him. Once set firmly on blocks a while, remove the braced 2x10 so you could walk around the slab to install forms and do the pour easier. The brace shown on the top would remain from start to finish to help retain the right angle.

Am I forgetting anything? 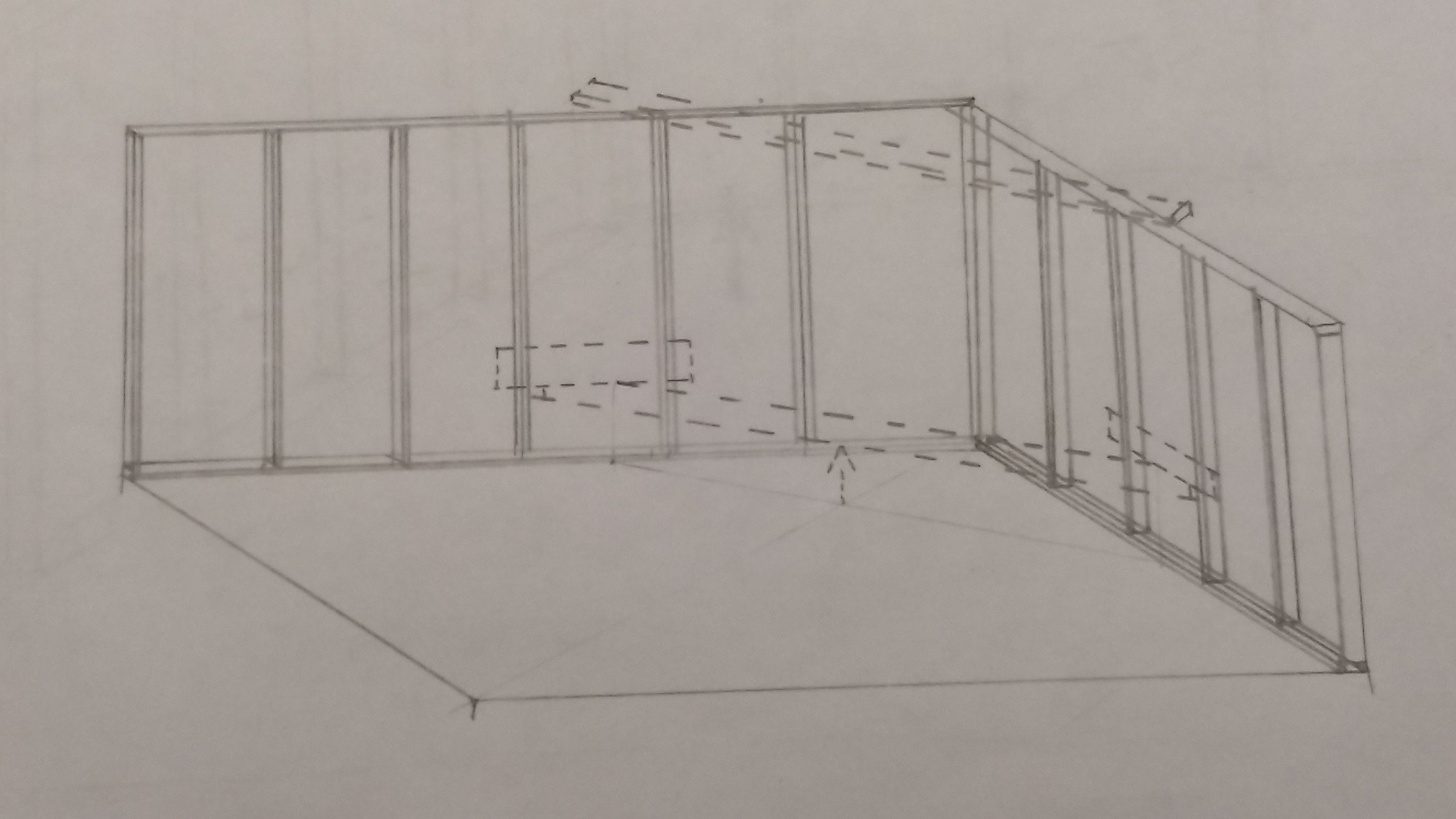 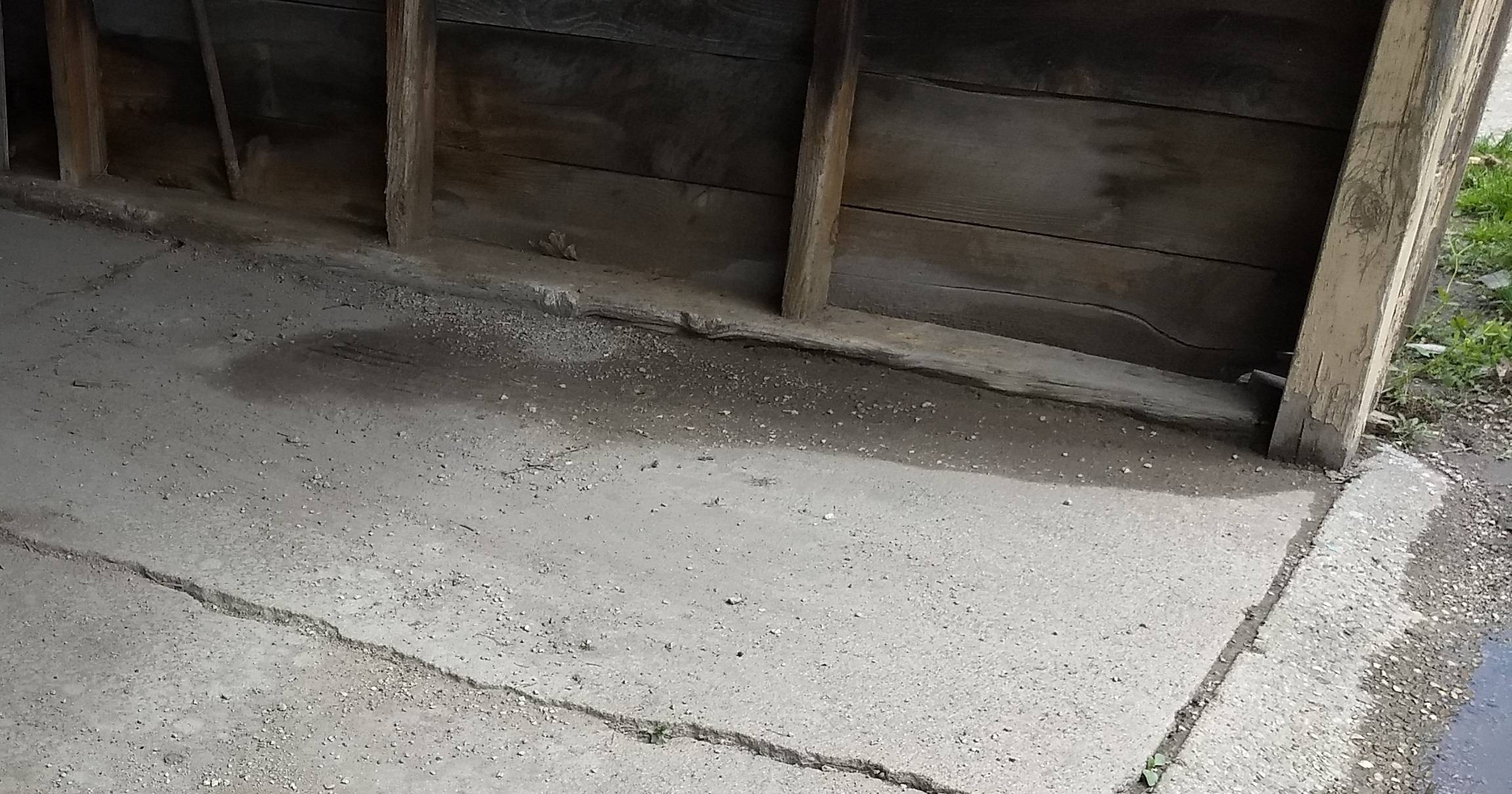 EDIT 2: Good news. Inspector has approved me just moving them to wherever I wanted temporarily so this will be pretty easy now. I'll remove the sheathing and separate the walls so my son and I can just carry them. :)

There are a number of good ways to do this. Here's the first to come to mind if you're hoping to keep the wall upright. No jacks involved. In my experience, they're more trouble than they're worth when things are being moved laterally.

I would separate the walls, if that's not difficult. A "cats paw" nail removal tool and a few minutes would probably do the job. You could cut the nails, but you'll have scarring on the lumber, and sometimes that's more difficult than it sounds. This procedure should work well either way, though.

When time comes to replace the walls, the levers should be at a suitable height. Just slide the walls into position.

Of course, you could always just lay the walls over and drag them out of the way. If you have enough help this is feasible. Four to six healthy adults could handle the walls individually.

Also, consider leaving the original sill plates attached and just add new, treated 2x6 underneath, flush with the sheathing on the outside. If they're solid, don't waste the considerable effort to change them, or just change the bad portions.

Not the answer you're looking for? Browse other questions tagged concrete walls garage structural or ask your own question.

5
Extending concrete Slab
1
How to insulate slab that's been extended?
0
Replacing a crawl space with concrete slab
1
How do I reverse the slope of my garage floor?
0
approximate strength of poured reinforced concrete slab
0
How to build up height of concrete wall to use as beam support for deck
0
How to Raise/Level a Sunken Patio Slab at the corner?
0
How Deep does a Concrete cut line need to be to control breakage