I want to replace my current service entrance panel with a newer 200A unit.

I am aware of the height limit to the main breaker and should be good there. Also, does the number of wires coming through the wall look up to code? About half the wires come from below so I thought I could add a junction box inside then run THWN wires up through conduits to reduce the number of wires going through the one bushing but if I don't have to do that I guess I'd rather not.

In short, if you were going to replace this box how would you proceed? Thanks! 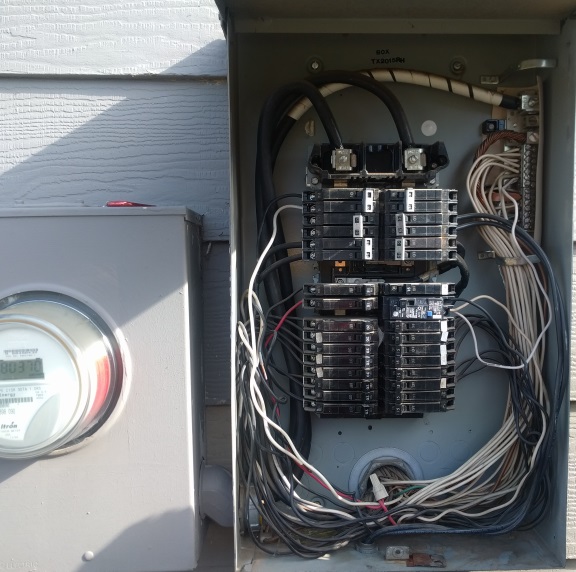 electrical electrical-panel
Share
Improve this question
asked May 1 '19 at 20:49

You can cut a hole through the back, with a nipple less than 24" long you can fill it to 60%, it's hard to tell from the photo what the fill is, in the past with exterior boxes I have punched 2-3 holes installed bushings and run my wiring from a gutter where I spliced it to some thhn/ thwn and ran that outside. In my last county the inspector felt it was safer not to splice in the gutter and to run the romex into the outside service panel, I would check with your local inspector as they may allow the romex into the service panel (2 out of 3 counties allow this to a nema 3R service panel in my area). The panel must be mounted on the dwelling so the wires directly enter the home.

Right off the bat, you're going to want a BIG panel. You already need 30 spaces just for the circuits you have right now, so a 30 will result in being full on day one. I want to see you have more of a "reserve" than a measly 12, but prices get exponential beyond 42 spaces, so I would stop there and use a subpanel later if you need still more.

Double-stuff breakers (like you have now) won't work anymore. Modern codes require AFCI and/or GFCI on virtually all circuits, and those are not available in double-stuff (as you can see from the one GFCI or AFCI in your panel). So if you get a "20-space/40-circuit" panel, you will have painted yourself into a corner (again). Only spaces will suffice. Also, this panel is a fluke, in that it makes efficient use of space with 2-pole double-stuffs. That's not possible anymore, not even on a GE panel.

If a big panel is too tall, consider regrading the earth around the panel, so you're standing higher on the wall.

Your new panel absolutely needs a main breaker; it's no longer allowed to hot-feed six large breakers as is found in this old "Rule of Six" panel. The size is decided by the power company, not you. Do not let this deter you from getting a large panel. This can be an annoyance if the Power Company wants a smaller breaker (say 125A) than anyone sells in a 42-space panel; however main breakers can be changed, and many "main lug" panels have space to upgrade a main breaker.

Now, I don't know what's on the other side of that wall. But I would put the panel indoors if I could help it. Why? Keeps it out of the weather. Weatherproof panels aren't, although yours has done far better than I usually see.

The cable run between meter and main breaker will be totally unfused. If it has a meltdown or short, unlimited amps will flow, unlimited heat will be made. It can make sense to fit an external main breaker even if you mount the panel indoors. At the least, make sure you are using all metal conduit - PVC fed by an electrical arc will just burn.

I would buy accessory ground bars for the new panel (or buy a panel that comes with), and separate neutrals and grounds (even though this is not strictly required in a new panel). I am a huge fan of wiring the neutral-ground equipotential bond - first a screw thread is wholly insufficient for 500A flow, it will just vaporize; and second, I like being able to clamp an ammeter around the N-G bond.

Looking at this panel I'm concerned with the lack of visible grounds. Now, the metal conduit is a viable ground path, so maybe the ground wires are attached to the junction box on the other side of the wall, that'd be fine. But I also see an awful lot of neutral wires as compared with the hots. I wonder if all the Romex cables are terminated in the box on the other side of the wall, and each wire was extended with black and white (THWN I hope). And then they used white for ground, "since they go to the same bar" being their logic. That is improper, they should've used green (or stripped the wires bare).

Just an update.... I decided to replace this box with a 200A, 8 space, breaker box with feed-thru lugs. I'm going to put 1 or 2 240V circuit breakers in this box but mostly it will be used only for the service disconnect and there will be a separate sub-panel inside the house that houses the majority of the breakers.

I'm hoping to use this enclosure to house the wire splices for the circuits that will not reach the new sub-panel location. I'll update again with pics if/when it actually passes inspection. Thanks for all the help everyone.

0
Upgrade Electric Service from 100A to 200A
1
Electrical service grounding
0
Do I need an upgraded meter base when changing 100 amp service to 125?
1
Is it better to install temp service or permanent outdoor service with future home as subpanel?
1
Sub-panel ground and neutral connected to main ground and neutral bar?
2
Service Feed Split box
4
What conduit and wire for an outdoor outlet directly to outdoor breaker panel?
2
Is my plan to move and upgrade service panels reasonable?
3
Adding 50amp box directly beside electrical panel