I've never had this happen to me and, now, in a span of 1 month, it's already happened 4 times... The following 3 LED bulbs and 1 LED strip have become unusable:

All them are over 1 year old but but no more than 3. They're not from the same batch, obviously, nor even bought in the same country. But they're all used in the same apartment, only in different rooms. However, in the lapse of 1 month they're all flickering and ceasing to work. It's important to note that they're not actually burning out, that is to say, the diodes aren't burning out and not working any more; they're only flickering or, at least, they're still flickering before dying completely, if that is the case.

The big Ledare is in my bedroom, and it simply flickers off more than it's on. It may turn on for a couple of seconds or even a couple of minutes, but then it turns back off for 15 minutes, 30 mins, etc.

The Ledare spot is one of 3 in a hallway and it simply flashes on and off all the time, rhythmically, even as if it had a microchip set to make it act like the flickering light of TV static.

In the case of these 2 I don't think it's the actual diodes but rather something to do with the transformer from AC to DC.

In the case of the candle-like bulb, which is in my living room, I can see one of its strips of LEDs is the one that's flickering on and off when I turn on the bulb; after a couple of minutes, it just remains off.

And in the case of the LED strip, which are also in my living room, it's one or 2 LEDs on at the beginning of the series that's flickering, almost constantly.

As you can see, whereas the first two bulbs completely turn on and off, the candle-like bulb and the LED strips are only partly affected, the rest of them work fine.

All the bulbs are connected directly to the AC mains, of course. The LED strip is connected to a 12VDC transformer.

The only thing I can think of is that it may have something to do with surges... Last year my Mac's transformer blew up all of a sudden and I had to get a new one. The iStore's damage assessment was a probable surge. So I bought a surge-protected extension for it and I noticed some months back that the green light which says it's protected has gone out, so I'm assuming that the surge-protection was burnt.

Nonetheless, I find it really weird that these LEDs are dying at the same time, instead of having been dying one by one all these 2 years I've lived in this apartment if, in fact, it's due to surges. Moreover, none other of my appliances (nor our computers' transformes) have burnt out around this time.

I really don't trust that this apartment has a good ground connection (or any ground connection, for that matter)... I'm assuming it probably has something to do with this. It does have thermal switches; and once they were tripped when we were using the oven, the washing machine and the vacuum at the same time, so they're not decorative... But that's about as much as I know, except that the electrical wiring is probably rather old, as it is an old building.

So what could be going on? And, more importantly, how can I solve it? Some of these LED bulbs are pretty costly, and one invests in them because they're supposed to last a long time but, in this case, they're lasting about as much as a normal incandescent bulb! At first I thought it might be faulty bulbs, so I called up Ikea, but then, some days lates, another, and another started failing... so to me it clearly has something to do with the house's electrics, right?

Thanks in advance for your input!

In North America, we have whole house surge protectors that can be installed in your electrical panel and protect everything. I imagine you'd have something similar but need the owners permission to have it installed. I have this one: EATON CHSPT2MAX 120/240V Max Standard Surge Protector.

I agree with jwh20 though - you've bought bottom of the line LED bulbs, even the LED bulbs that are top of the line I've had die around the hour rating.

Even after the lifetime that they note LED bulbs are supposed to still be working they are just supposed to be 30% dimmer or something but in my experience the transformer kicks it well before that.

The piece that is failing in your case is the transformer so probably cheap components. It could be that you have surges and that this exacerbates the problem, cheaper components will probably not be as resilient. Even the name brand Philips LED lights put a warranty of 3 hours a day for 3 years = 15,000 hours. The led lights you've bought are cheap at $2 each or something is that the investment you are talking about?

Even the A19 bulb from philips that i paid $30 for only lasted around 15k hours. https://www.extremetech.com/electronics/142134-philips-revamps-mainstay-led-bulb-a19-led-is-prettier-and-more-efficient - the transformer failed. I feel like that was an investment. I didn't even have any surge conditions and the house wiring was less than 20 years old.

Prices have come down though and now I can get a 3 pack of the A19 2700k for $13. So if each bulb is $4 instead of $30 it probably pays back for the lower amount of electricity that it has used over the course of its lifetime.

The brand name ones are - more than likely - designed to fail after the warranty hours, the ikea/chinese ones aren't even designed - they'll just fail randomly and likely before 15,000 hours.

At the cost of your specific bulbs if they last close to a year then probably you could go for a hundred years before it would be worth the cost of adding the whole house surge protector and that might not even help with the bulbs lifespan.

Electronics in general tend to fail with heat. Is your apartment climate controlled or subject to higher than average temperatures?

Here is an LED bulb that is around $1 USD but the prices you've paid are higher than I would have expected. 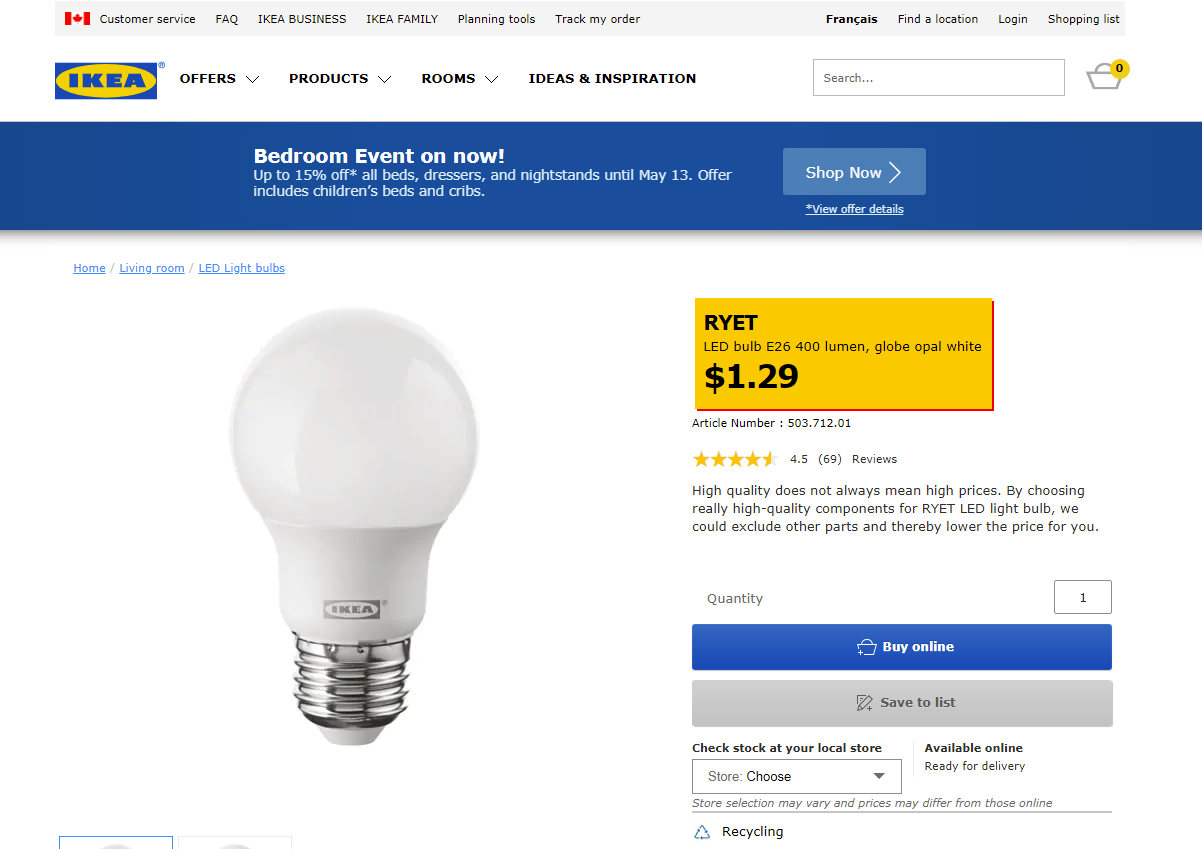 I find IKEA to be perfectly quality stuff, but I assume you bought this in a retail store instead of importing counterfeits from the far east.

A rash of failures would indicate some sort of intermittent power quality problem. That may also be intersecting with a case of "cheap Cheese junk".

Speaking of that. The failure of #3 is a matter you should be taking up with the importer, and in fact, the importer should be brought up on charges for this. You may notice how that item has no UL listing/assigned number, no CSA, no BTI, no TUV, no medallion/certification from any testing lab whatsoever. That's because it was never tested in a lab. Boy, it sure makes it easier to make products when you don't have to have them tested, eh? It probably has the CE mark, but CE is not a testing lab. CE is a promise by the EU-based manufacturer, or EU-based importer, that this device complies with all EU regs. It's a mandatory promise, but it is not preemptively enforced. It is enforced when an importer lies and imports products with a CE stamp that they didn't oversee testing on. Now, who is the EU-based importer who is responsible for this crime?

Well, golly gosh. You didn't buy it from Amazon, at all. You bought it in the "Amazon Marketplace", which is any random person who wants to stick a listing on there... and it was shipped to you direct from China (not that an Amazon dropship warehouse makes any difference). That means you're the importer.

Well, importer? Do you do the required CE testing to certify that the product is safe, so the mark is legit? You didn't, you say? Well. I suggest that you file a warranty claim on yourself, report this incident of import fraud to the authorities, and then turn yourself in.

At those prices you're not even seeing any bargains. Lately AliExpress has gotten really brazen and is just charging almost the same prices as domestic suppliers like Philips or Siemens. People still keep buying because of "halo effect", I guess...

Actually the problem with item 4 is not even the 12V LEDs. It's how you got the 12V from mains power. I assume you are using a power supply of equal ...... provenance.

Again, stop hooking crap from China to the mains power, especially if you have dodgy grounding! At least use a quality power supply with a UL or TUV rating and number (or at least a ЯU rating, which is UL but for components, at least you are trying).

What you do on the 12V side, I'm not so worried about, I use the cheap LED strips myself, I just drive them with a UL listed power supply.

The 60w equivalent bulbs tend to last fairly well, the higher wattage bulbs burn out faster because they get to hot. The circuitry is taken from the chip makers suggested circuits and assembled with the cheapest possible parts.

My power quality is good and I have a whole house surge protector on my breaker panel. I've taken failed bulbs apart and found bad caps,fried bridge rectifiers and fried resistors. These are poorly designed and built and it does not seem to matter if they are built by Phillips or Yamaguchi, the published date is pure crap.

Not the answer you're looking for? Browse other questions tagged electrical lighting light-fixture led surge-suppression or ask your own question.

2
One specific light fixture seems to be killing my LED bulbs
2
How to fix my LED track lighting that is flickering?
2
LEDs in a multi-bulb fixture only dim when installed alongside a single 60W incandescent bulb
0
Is there a way to use timer switchers and dimmers that were designed for incandescent bulbs with LED bulbs?
0
LED bulbs in my old house are dying prematurely
2
Why do these LED light bulbs flicker when my remote control has turned them off?
5
LED bulbs flickering
3
LED T8 tubes overheating?