How to connect a new C wire

I have a 2 zone, single stage, heat only system with 2 wires running to each thermostat. I'm looking to install 2 Ecobee's; I have a second Honeywell AT72D1683 that I can install if needed and have new 5 wire cable ready to run as soon as I know where to hook it up. 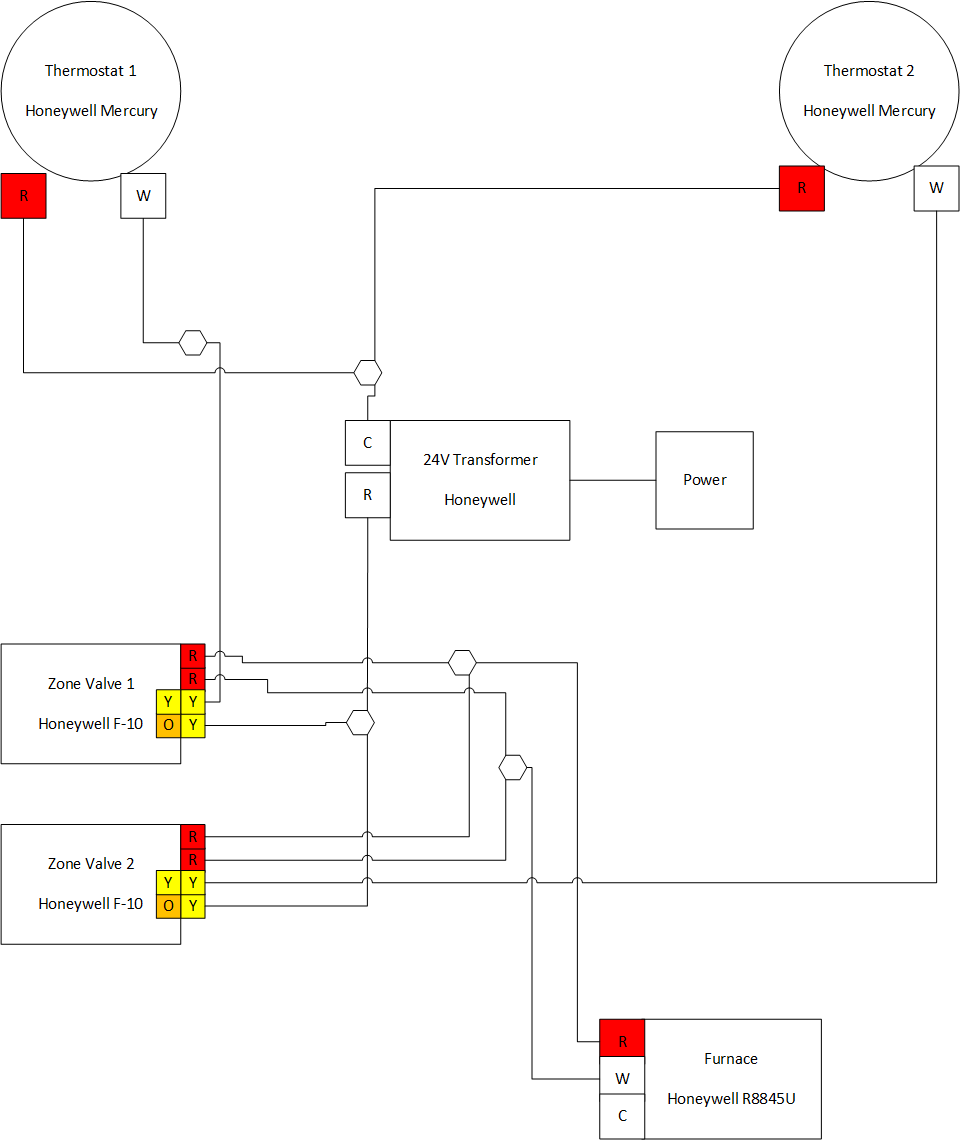 Your setup is "upside down"

Normally, 24VAC HVAC thermostats are set up to switch on the high side, connected between the ungrounded secondary terminal (R terminal) on the transformer and the actuator (gas valve, furnace control, zone valve, compressor contactor, fan relay, ...), with the other side of the actuator connected to the grounded secondary terminal (C terminal) on the transformer.

However, your system is set up the other way around -- R is routed to the actuators, which then are connected to the thermostat, which then connects back to C on the transformer. (Think of it like a lightswitch in the neutral instead of the hot, just without the Code issues involved with that.) This is fine for "dumb" mercury thermostats and "dumb" actuators like those in your existing system, but is not what today's programmable and "smart" thermostats expect, so our first order of business is straightening that out.

Once that's done, you should be able to get the zone valves to operate by jumpering the red and white wires at the thermostat ends of the new cables. If that proves out, you can then remove the jumper and install the new thermostats as if they were connected to garden-variety HVAC systems, with the green and yellow wires left unconnected at the thermostat ends as well.

Not the answer you're looking for? Browse other questions tagged thermostat thermostat-c-wire transformer or ask your own question.

1
How do I wire this thermostat?
0
Where do attach C wire on my boiler?
1
Honeywell VR8300A3500 Single Stage Heat Gas Valve to Ecobee3 with C wire
1
Installing an Ecobee3 - Add C Wire with PEK
0
Help me to find C wire
1
How to connect c-wire to Burnham Series 2 boiler?
2
Honeywell TH6320R1004 Wireless Thermostat with Two Transformers