I am working on tiling a small bathroom with vinyl floor tiles. As I was measuring to ensure there are no unusual pieces in the corners and thresholds, I decided to check for an application to help with the layout. Surprisingly I couldn't find anything. It seems that I should be able to draw out the room dimensions and simply drag around a representation of the finished floor until I'm satisfied. Maybe I'm over complicating the floor layout but this would greatly reduce the trial-and-error of layout. Barring any sort of application, I've watched YouTube videos about snapping lines at the center of the room but, again, this relies on trial-and-error. Is there a method that doesn't rely on experimentation?

Software would be nice, but setting up your room diagram is probably more work than just trying your layout in reality. Plus, there's no substitute for actually seeing it in place.

I usually do this:

Once you find a satisfactory layout, be sure to look at it from adjacent rooms. If all is good, mark the key axis locations on the subfloor, and take dimension notes as a backup.

I agree completely with isherwood, especially on a smaller job like a bathroom, but I wanted to add my recent experience with my recent, fairly complicated, tile layout. It required some pre-planning before we could even start to dry-fit the tiles. There were a few factors that caused the need to plan:

I looked and looked for some sort of tile software, but found nothing that would work for me. I ended up using Microsoft Visio - mostly because I already had it. You could use any similar vector graphics drawing program such as Inkscape, Google Drawings, LibreOffice Draw, etc.

I created a few layers in the software to work with the layout:

Play with the Pattern

Then I just spent time playing with the layout to see where the grout lines ended up, where full size tiles were, what the edges look like, etc. You can slide the whole pattern around on top of the boundaries to see how they will look. I would show the layout to family and friends to see if they noticed anything that I may have missed. I would look at the layout a day later to see if I had missed anything. I could also count each of the sized tiles to know if I was going to have enough.

Finally, I made printouts to use when I was doing the tiling, mostly because the irregular pattern was hard to keep track of without a guide (especially if I was tired!). I would mark them off as I laid them. I definitely ran into some spots where my measurements were a little off, or the walls not as square as I drew, but it was close enough to give me an idea that the layout would work. 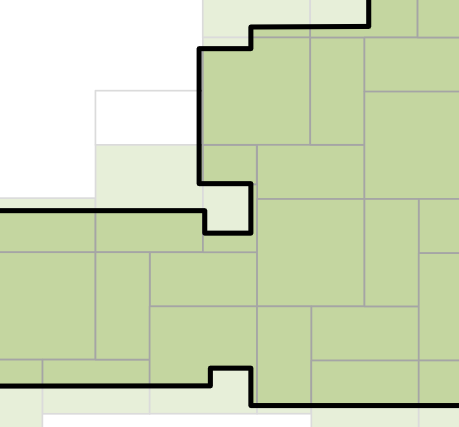 Not the answer you're looking for? Browse other questions tagged flooring tile vinyl-flooring or ask your own question.