Can I wall-mount a TV when there is an air gap between the drywall and the wooden stud?

I located a stud, but the drywall floats an inch above it, plus the drywall itself is another 1/2 inch. So a couple 3-inch screws (and not a micron longer or they'll protude into my nice old neighbor's kitchen!) is required.

Pretending the drywall won't hold any weight, that means the 3-inch screws will be half-in and half-out of the wood. With a TV hanging off the end of them.

I now have several 6" bolts going through the drywall, plaster & lathe, and studs in the closet, with big-ass washers for a little extra "spread". The Cheetah mount is wide & flat enough that it isnt pulling into or denting the drywall, and amazingly there is ZERO glare/reflection coming off the window.

Thanks everyone for your help, you gave me the info, perspectives, vocabulary and confidence to tackle this problem intelligently. :)

The air gap problem is quite common: The sheetrock on many walls I have encountered doesn't contact the studs everywhere. So, when you tighten down a TV mount to the wall, the drywall deflects toward the studs. You can easily cause cracking of the drywall, particularly when there is a seam in the area.

The principle of the solutions in this case make use of a fastener's ability to support an overhung load.

Assuming you find wood building structure in there (furring doesn't count here because it will twist under the torque), I recommend hanger bolts.

Use a spade bit to clear a hole in the drywall big enough to accommodate a nut flush with the surface of the drywall. Then put the mount over the hanger bolt and tighten another nut down on that. The first nut will keep the drywall from deflecting toward the wall. Size the hanger bolt larger than normal because of the overhung load. From your description I would guess that 4x 1/4" hanger bolts would be adequate.

Make sure you pilot drill for your hanger bolt or you risk splitting whatever wooden structure you're screwing into. 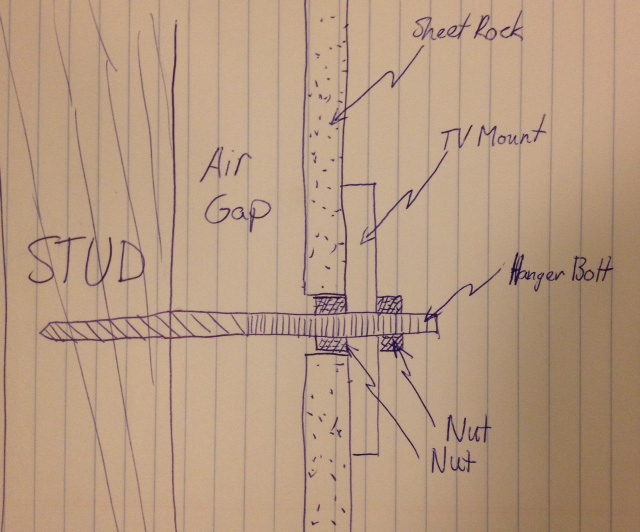 I've also encountered furred out concrete clad in drywall (common in highrise condominiums). In that case, the same principal as Case 1.1 applies, but use "drop-in anchors" and a threaded stud instead of hanger bolts.

Case 2: Fasten to Furring with No Air Gap

Sometimes drywall is attached to and is in contact with (i.e. no air gap) furring.

The principle of this solution is to transfer the load to the building's structure directly through the furring.

Where furring and drywall are creating their own structure, drive multiple wood screws into the furring to fasten your TV mount.

The principle of this solution is to use the furring to distribute the load to a large area of the composite structure of furring and drywall.

Drywall itself is rather heavy, so if the wall is able to hold itself up, there's a good chance it can hold up your TV to provided you distribute the load over a large enough area of drywall and furring. 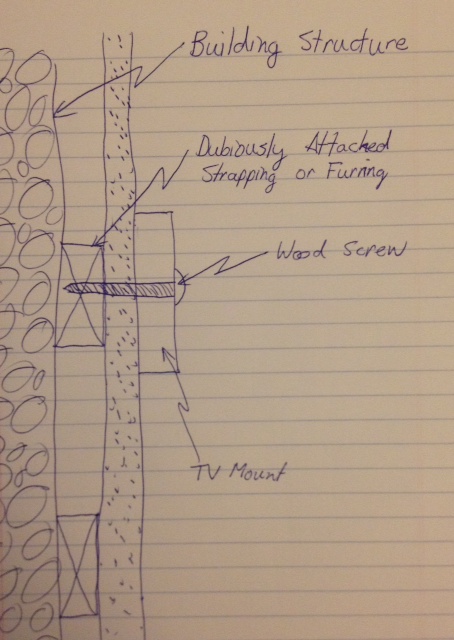 My concern is the "float." If the drywall is an inch "above" the stud, what is the drywall attached to? Not the stud. Also, standard construction has a 2x4 stud with its short side facing the finish material and its long side, about 3.5 inches, perpendicular to the finish material. If you have only 1.5 inches before poking through, this is a very non-standard structure. Also, even if the stud were flat (the 3.5 inch side facing the room) your 3 inch screw, run in 1.5 inches, should just be touching the back of your neighbor's finish material.

Mounts are intended to have the majority of thrust perpendicular to the wall. This exerts a shear force on the screws, rather than a horizontal pulling force. With shallow flat screens and flush (not angled or pivot) mounts, that is primarily true.

But that is the majority, not the sole force. There is always some lateral force, tending to pull the top out from the wall, and push the bottom in. If the drywall is floating, there is a serious risk that the mount will push in at the bottom and not have anything to keep it from punching through the drywall.

You really should try to find a solid point of mounting. There may be some other wood somewhere that is between the drywall and the "studs" you found. I would suggest that you keep searching.

Having the drywall floating an inch off the studs sounds like you have some kind of sound attenuation channel installed to keep the studs. These are used to prevent sound from traveling between the drywall and studs, either because it's a common wall with a neighbor in a multi-unit structure, or because you live near a loud area (such as a highway).

The drywall itself, on these channels, shouldn't be used to support a heavy load. And putting a screw through the drywall into the studs short circuits the separation allowing sound to travel easier. If it's a common wall, you may be violating some rental or HOA agreement. And if you live near a noise source, it's eliminating whatever benefit they gave you when building the house this way.

For the screw itself, first, it really should be a bolt that has more resistance to shear and bending. The further out from the wall, the more leverage the weight has to bend the screw/bolt. And as blb points out, you can cause the drywall at the bottom of the mount to collapse back onto the studs.

If that is some type of sound attenuation channel, then my suggestion would be to mount the TV free standing (on top of a stand) or locate it on another wall.

Edit: The comment about "prewar" makes me suspect that you have wood strapping to attach the drywall to a flat surface. The strapping is often only an inch or so wide. Find how they ran the strapping and run your bolts through the drywall, strapping, even the plaster behind. If you can catch some structure behind the plaster, that's even better, but you should have enough to support a flatscreen.

Why not simply use hollow wall anchors (molly bolts)?

Not the answer you're looking for? Browse other questions tagged walls screws studs or ask your own question.

4
How can I mount a TV when I can't find studs inside my wall?
0
Mounting a TV to Concrete Through Wood Paneling and Air Gap
1
Where are the wall studs?

1
How can I hang a wall mount on misaligned studs?
1
Fill 3/8" gap between wood and wall
3
Can I safely mount a wall-mount networking rack on one stud?
2
Articulated arm wall-mount (13lb. LCD monitor), 25 gauge metal stud, 3/4" drywall
1
Using a full motion single stud wall mount for the 49” Sony 900f?
0
What screws to affix TV mount to wooden stud partition?
5
Mounting TV on a weird wall that has some material between the drywall and stud
1
Gap between floor, wall and stair
12
Can I mount a TV stand on drywall on only one stud?
0
Is there an only proper way to frame a stud wall?