How much wattage to choose for LED light when replacing flourescent light with LED?

Suppose I have a circular 22W flourescent light at home and I want to replace it with LED of similar brightness. How much wattage should this LED have? Any rule of thumb as guidance?

The salesman at the LED shop recommended me to replace 22W flourescent light with 22W LED. Can there be any energy saving if the wattage is the same?

As to whether an actual 22W Led would be more efficient or not compared to an actual 22W florescent, it still would, in terms of how much of that 22W is converted from electricity to visible light instead of lost as heat.

TLDR: figure about half the wattage for LEDs as for fluorescents.

Fluorescents (and other discharge lighting such as HID) are already as lumen-efficient as LEDs. What makes LEDs more efficient is aiming. 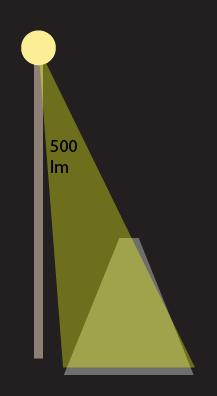 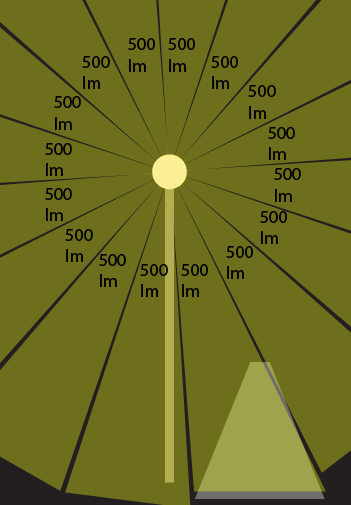 What you want..... what you get without at least reflectors.

Here's what reflectors do (coarsely). 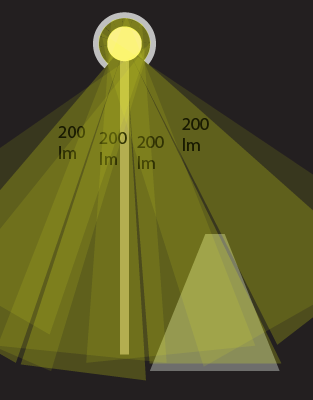 You get 200lm of direct light and about 300lm from the relatively inefficient reflectors. So in this case you might get it done with 3200lm of light.

(the laser guys can get highly efficient reflectors, but they must keep them fastidiously clean. In the real world, up on a pole, fuggedaboutit.)

Note that so far, we are presuming all light sources emit light in a circle (a sphere, actually; this makes the numbers worse.) That is true for every light emitter ever made so far - candles, incandescent/halogen, fluorescent, neon and the other arc-discharge lights. When lights are rated for lumen output, they are placed in a spherical room with sensors in all directions. Therefore the lamp's lumen rating includes a whole bunch of lumens you can't use!

However, LEDs are a different deal. LEDs naturally emit in a cone of 120-160 degrees. That's still more than you want in most cases. But this lends itself to a much better method than reflectors. Optical lenses. These are close to 100% efficient.

Because of this, LEDs can let you plant almost all of their lumens where you want it. Actually sourcing a light with perfect lensing can be a trick, though. So you may have to settle for something "in the neighborhood".

Anyway, when you're replacing fluorescents with LEDs, that seems to work out to about 50% of the wattage. Because we're not improving the efficiency, we're just improving the aiming - and typically not by that much. The fluorescent-replacement "LEDs" generally throw in LED's default 140-180 degree spread, just as fluorescent reflectors do.

All figures are in real watts, not incandescent equivalent watts.

Not the answer you're looking for? Browse other questions tagged led light lighting or ask your own question.

3
Why won't my dimmer dim CFL Lights?
3
Does a fluorescent light fixture use more energy than an incandescent?
2
Spot light LED bulbs (MR16) flash once when turned on. If I put 1 normal halogen in then it solves the problem. Why?
1
How do I calculate brightness of LED strips equivalent to incandescent light bulbs?
1
Replacing LU70 High Pressure Sodium Bulb with LED?
15
How much power do LED smart bulb wireless control systems consume when the light is turned off?
0
Light with Dimmer and LED bulbs blinks when on by itself