I recently purchased a used park model home, located in USA, with stick built attachment. I have a light switch ,with current, that does not control any light or receptacle,that I can find, in or out side of the structure. The switch is in a two switch box. The box has 4 cables coming in. One cable has a red,black,white and ground wire. The red wire is attached to subject switch and has a black wire pigtail connected to the incoming black wires. The other switch has 2 black wires. One is an incoming wire and the other is a pigtail connected to the incoming black wires. The white wires are all tied together. What I overlooking? I appreciate any advice.

You most likely have a split (or formerly split) duplex receptacle somewhere. 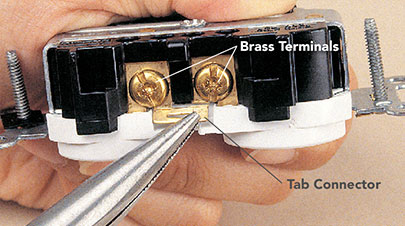 Now, if you've checked both halves of all receptacles in the room with the switch and find that they're all always hot, it's time to start pulling off some outlet covers. If at some point in the past the half-switched outlet was replaced, it's very possible that whoever replaced it just landed all the wires on the same screws as before, but didn't realize they also needed to break off the brass tab. This would result in the always-hot and the switched-hot wires being paralleled, and both halves of the outlet would be always-hot regardless of switch position. The fix for this, assuming you want the outlet to be half-switched again, is to shut off the circuit at the breaker panel, and break the tab connecting the two halves.

That's not unusual. The four cables are:

Color coding is extremely unreliable in home wiring because you are stuck with the standard colors that cables are manufactured in. However, in this case, by dumb luck, the color codes are consistent:

1
How do I wire a new light fixture with a red wire?
1
Two white, two black, two ground, and red wire in ceiling box connected to switch
1
Ceiling box has 2 black and white wires but fan/ light only has 1 of each
1
Replacing 2 wire switch with 4 wire switch, box has 3 wires. Help?
0
Wiring Light Fixture with 2 Sockets into Junction Box with 2 White, 2 Black, and 1 Red Wire
2
Replaced motion sensor light switch; extra red wire in wall