Please see image attached. I am looking to make a notch in a 11 1/2 LVL beam spanning 17ft across my basement. 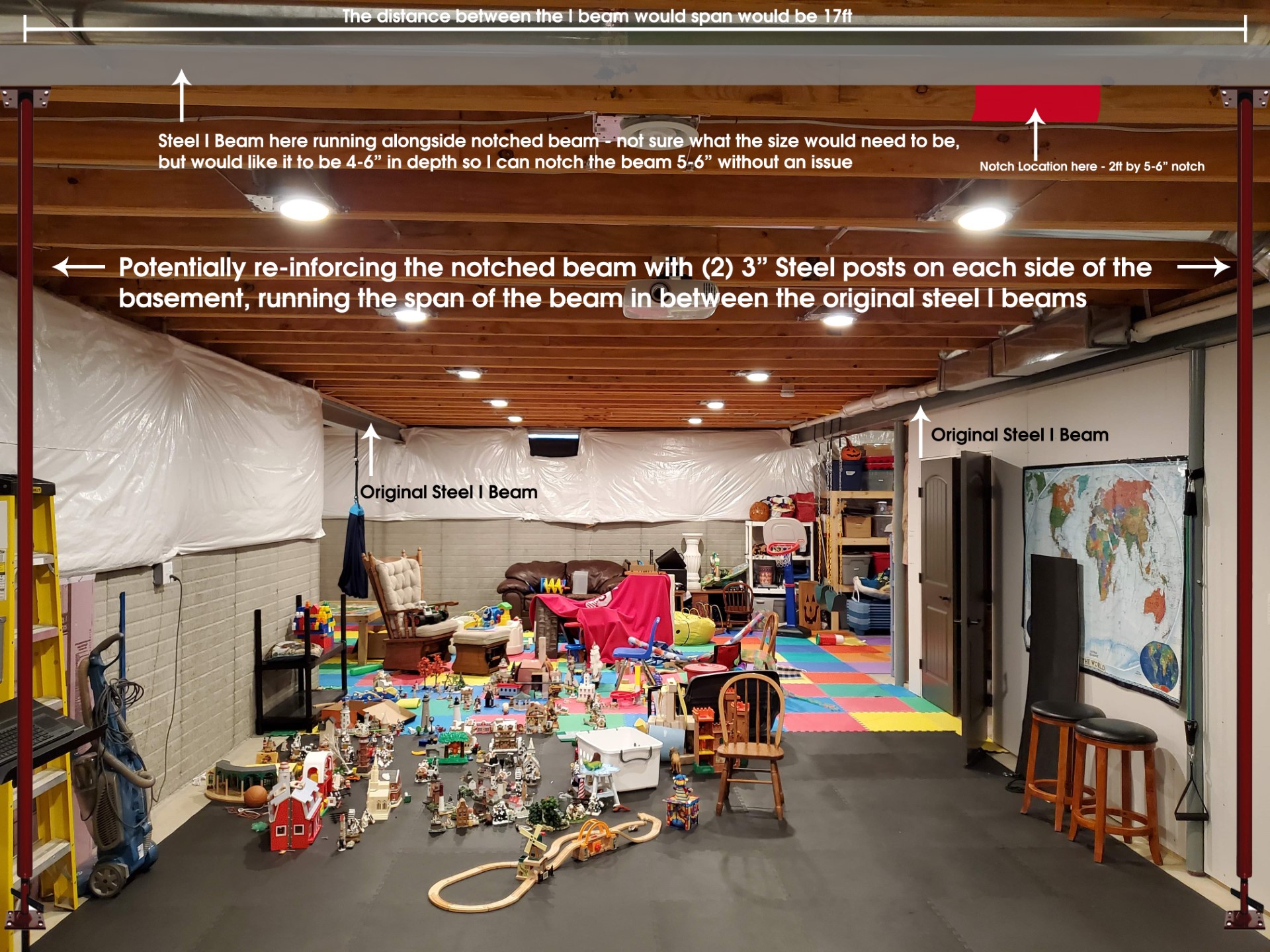 The engineered lumber should be marked with the name of its manufacturer. Each manufacturer publishes information about the size and positioning of cutouts that are allowed on a "prescriptive" basis. If you can't find a cutout or notch description in those tables then you'd need a structural engineer to design something specific for you.

The steel I beam approach you proposed may work, but it may not be necessary to go that far. It may be possible to simply reinforce the joist that is to be notched, for example by attaching a plywood or steel sheet gusset to the sides of the joist extending some distance beyond the notch.

An alternative is to cut out the marked part of the joist completely. A beam may be installed crosswise between the joists to the left and the right of the marked joist so that those two carry the load of the cut joist. Doing this is likely to require those two joists to be reinforced in some way, such as "sistering" them by installing a second joist alongside the existing joists. The "sister" might be dimensional lumber, another LVL of same or different depth, etc.

A structural engineer could help you figure the loads carried by the floor above and choose the "best" approach based on material cost, practicality of carrying materials into the space and installing them, etc.

I am a structural engineer.

You can't notch an LVL since it is an engineered lumber product. Boise Cascade doesn't recommend this. There is a good possibility the LVL might work as notched, but a P.E. would need to perform the calculations and put their stamp on this to the building inspector.

That is a very big notch!

I can't think of any reason for such a large notch in a single joist in the middle of nowhere in your basement. Therefore, my immediate question to you is what are you really trying to accomplish here? You can usually put a number of drilled holes in the center of the LVL in the region you indicate if this is for piping or electrical. If it's ductwork then you can use one or more flexible round ducts that could use drilled holes to get from one side to the other of the joist.

@Greg Hill's Idea of sistering to the adjacent joists is your best option if putting in the cripple joist (or box joists) doesn't create a problem for what you are trying to do.

Alternately you could put in a short wall under the notched LVL and create a book case or some other architectural addition there.

Off the top of my head I believe any 6" deep steel beam or channel you can find will work from a strength standpoint, but will tend to bend more than you might want. Two channels (one on each side of the LVL) could easily be bolted through the top portion of the LVL to each other. Similar to a flitch beam. If you do the channels you would not need to make them full length, nor would they need to bear on the original steel I-beams.

Not the answer you're looking for? Browse other questions tagged basement or ask your own question.