New construction house, 3y old. Southwestern Ontario, in Canada. We are on a private well with fairly high iron (3mg/L) and hardness (612mg CaCO3 /L). We knew this when we built the house and installed higher-end iron filter and water softener. Water testing after the treatment system shows under 0.5mg/L and hardness of 76 mg/L.

In the last three months we have noticed that our toilets are starting to get brown staining consistent with high iron. We tested the water again and received results consistent with earlier testing. The rust-coloured deposits are easy to clean off the porcelain if done relatively soon after appearing but new staining returns within about 7-10 days. This is a new development; we did not have this problem previously.

On a hunch that perhaps the Clack valve on the iron filter was malfunctioning and it was perhaps not fully in backwash mode and thus occasionally backwashing the high iron from the media into the downstream water rather than the drain, I had it replaced last week. I haven't had the water tested again, but using simple iron test strips report that I'm still seeing approximately 0.01mg/L which is really low, but my wife took a bath today and the water was quite brown.

(not sure if it is useful data, but these test strips only indicate the presence of Fe+2, so I have performed the test twice: once with water from the test site, and once again with about 1/4tsp of ascorbic acid mixed in to reduce any Fe+3 to Fe+2. The untreated tests show almost no iron at all (no pink colour) but the treated tests all show approximately 0.01mg/L, the second-lowest indicator available with the test strips)

The natural gas hot water tank is new. It's rented, and was replaced last year because I asked the company that owns it to replace the magnesium rod to combat the typical "smelly hot water" problem; they couldn't get the magnesium rod out so replaced the entire tank and installed an aluminum rod in its place. This helped the sulfur smelling hot water considerably but I still find I have to purge the tank every 2-3 months and put 1.5L of hydrogen peroxide into the tank to kill off the bacteria.

I have noticed that the tank seems to have a LOT of iron in it; every time I bleed the air out of the lines after treating the tank with peroxide I get nasty brown water for a minute or two from the hot water taps. I'm not sure how this iron would backwash into the cold water to the extent that it would get into the toilets, but this iron is coming from somewhere and I'm at my wits end trying to solve this.

Does anyone here have any suggestions on how I can identify the source of iron and even better, how I can solve this problem?

I'm working on different but somewhat similar problem (mine is identifying brownish water in a brand new toilet). I've decided on a troubleshooting solution, after adding filters and installing a brand new toilet (the bolts in the old tank were rusted and I thought that was my only problem but the brown turned to a lighter tan with a similar problem to your description).

My solution was to use one of those free water test kits on each separate area of the house testing both hot and cold water throughout the house and it isolated the problem to a buildup in the line. After identifying which lines were the problems, I rigged a recirculating system in my water system where I could attach a garden hose to the faucet, another garden hose to a "T" after my house shut off valve and pump a cleaning chemical through my water supply lines (I used CLR). It was a bit of a lengthy process but it did improve my water quality. The "T" is going to be used for a full house water treatment system (when I win the lottery, maybe sooner) so that I have clean soft water throughout my entire house. Until I get a whole house treatment system, I'm going to occasionally "flush" my water lines and filter my water under the kitchen sink a limit my consumable water to that filtered system. 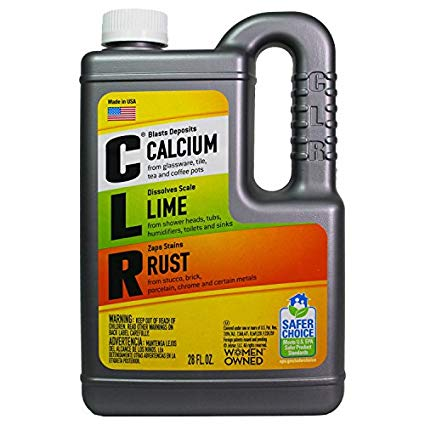 EDIT: Of course you need to flush your system thoroughly after doing this. CLR isn't as toxic as Drain-O but I'm not recommending anyone go chug a glass of it or even use said glass for drinking without a good cleaning.

Not the answer you're looking for? Browse other questions tagged water water-treatment or ask your own question.

7
If the iron levels in our home's water are too high, how do we adjust them?
3
Is it normal for tap water to turn brown/blue when the pipes freeze?
6
Why am I getting water scaling even with a softener installed?
3
Is there a globally recommended “hardness” setting for a water softener?
1
How can I remove iron from water?
4
What kind of chlorine solution do I use in water treatment system?
1
How to chlorinate a tankless water heater?
1
How to stop copper pipe corrosion (green copper stain in sinks and tubs)
2
Black greasy specks in sinks, dishwasher, etc. at home