I find as a knowledgeable home DIYer, that my Siemens 200 amp circuit breaker panel to be a pain in the butt to use. It is less than 25 years old, and yet it seems to have been intentionally designed to obfuscate which circuits are connected to which breakers.

I don't think it is a problem which only exists with Siemens brand breaker panels, as far as I can tell, all brands have the same problems.

Here are the major problems:

Now I have my suspicions about the poor design choices being foisted on the final consumers of these panels, and this is not the place to air that, but I would like to know why the standards organizations in North America allowed circuit breaker panels to be designed so poorly? Am I missing some benefit that all of these complains I've raised bring?

Now you may wonder why I care so much about this, let me explain why I got so annoyed with this panel. I bought an IoTaWatt electrical energy monitor. It really only has inputs for 12 separate circuits when you get down to it, and so I wanted to "bundle" several circuits per CT (Current Transformer) sensor. To do that, you need to have to know what leg they are on, and it helps if they are on the same side of the panel etc. etc.

In the process of tracing down every circuit in my house, I discovered that the only electrician I had ever thought was not a jerk was also a jerk (he wired in a light and plug in a little closet in the basement into the house-wide smoke detector circuit which turns out the electrician two times ago thought would be best to wire into a subpanel on the third floor.

...Now I get it, when you are stuck working on an old house, with too many illogical circuits, it is tough to do the right thing, but I think part of the problem is that when electricians open up the service panel, they are already down two pitches because of the design problems I outlined above.

When I had finally moved enough circuit breakers around to stick CTs around all of my important circuits, then balanced between right and left legs again, and weeded out some unused cables and made room for the addition of a new subpanel for a new garage, I must have taken the dead-front off 5-10 times. Keeping track of those changes was VERY difficult, in part because of the lack of convenient and visible labeling.

Many things are built for a variety of uses. By nature, it cannot be optimized for every use. Compromises are required. That is not a defect; the manufacturer needs to balance all uses of the panel and build something that is ideal for most uses. In particular, the electrician's job can be compromised more, since electricians are professionals who can handle it. Now, as to your individual whinges:

All info on cover: So? That's never slowed me down much. Count down the breaker spaces and know where you are. Often it is obvious because of a 2-pole breaker adjacent or nearby. If you want to position your 2-pole breakers to aid in this, go for it.

Poor numbering: It is totally impracticable to make the breaker-space numbering line up with the phases. Your idea of numbering the spaces down the left side then the right side, doesn't work. Panels are often made 6, 18, 30 and 42 spaces, especially better panels made both 2-pole and 3-phase innards. What happens with space 10 on an 18-space panel? It'll be on the same pole/phase as space 1. What are you supposed to do, make that space 11 and tell the owner "you don't have a 10?"

"Oh, make all breaker panels multiples of 4 spaces" -> actually means "must be multiple of 12 spaces" because most panels are also made with 3-phase variants. That would really limit choice.

Now if you are trying to "balance the panel" because you have multi-wire branch circuits, then just stop. Code requires you put them on 2-pole breakers (not duplex/tandem/double-stuff). Under no circumstances attach a MWBC to separate individual breakers or independently thrown breakers (e.g. twin). Do not wing-ding MWBCs, follow the Code and put them on 2-pole breakers. (3-pole in NYC).

Screws strip out - Yeah, that's because you're trying to force-fit the panel, using the screws to jack the panel down over the wires. No sane person would ever do that because it would pinch and damage the wires (and also strip the screws obviously).

That seems to be a significant competency gap with wiring skills. Or alternately, and especially if you are dealing with a box that's been through many renovations, you may be dealing with a rather old panel which is too narrow for modern NEC rules on wire bending radius. That's why panels narrower than 14.5" are practically a black swan. This problem compounds quite badly with GFCI or AFCI, which are extra-wide breakers, and I note, have virtually no space to put a marking (which makes me wonder if that's what you're doing). Say you are putting #6 wires on a 60A GFCI, you'll have a heck of a time in an old panel. The answer is, "Don't do that - move it out into a modern spec subpanel".

Read up on the wire bending radius rules. Space is not optional. 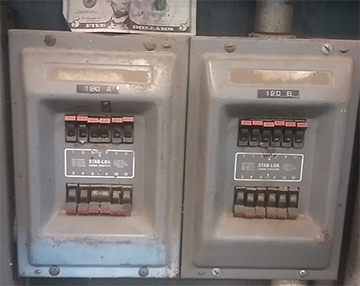 My God, service panels are built to a standard wall thickness (to engage -32 screws) and they are tough. If you are bending out the sides of the service panel you are either harmfully bending thick wires, or acting like a gorilla because you are angry, and that is you intentionally breaking something that is angering you. I fizzle yo shizzle, believe me, but that is not the same thing as it is defective. Have a little empathy for this equipment you're asking so much of.

Keep in mind you are asking even more of it trying to stick these CT's on there. I could see where that would quickly become a spaghetti nightmare if the panel is already that way.

The other thing, the service panel is not a closet to keep surplus cable length. Leave an inch or two tops of Romex length to let you Sharpie what the circuit is. But every cable should be only long enough for its hot(s) and neutral to be able to reach (ideally) every space in the panel (most will suffice). I also suspect previous installers (or you), everytime you add a circuit you just huck down all 3 wires on top of the existing spaghetti vomit, making it pack very poorly. That is wiring wrong. They should be layered - grounds pushed way back and behind everything else and run orderly around corners and edges, so they take almost no room at all. Then a layer of neutrals (except those going to GFCI/AFCI) so they are also pretty tucked-back; that helps because you tend to have a lot of extra neutral length. That leaves a lot of room for the hots (and neutrals accompanying their hots to a GFCI/AFCI) to maneuver where they gotta go.

Yes, adding a circuit, you do need to weave your grounds and neutrals down to their appropriate levels if you don't want the sloppy mess.

If you need to spend hours rearranging all this to make it neat and workmanlike, then do it. That's actually a Code requirement. NEC 110.12 I believe.

That is exactly my tendency when confronted with Mom's spaghetti: Reboot! Do some preemptory labeling but then pull every wire off every hot neutral and ground and lay it all back down proper, grounds first. This is a chore but pays huge dividends down the road. I bet wiring those CTs would be a lot easier if the neutrals weren't in your way! (and do remember that instead of a hot you can run a neutral through the CT in the opposite direction).

Also one of my favorite tricks, which may play very well with your CT plan, is to attach a short run of EMT conduit <2' long out to large junction boxes... then reroute the cables to terminate at the junction boxes instead of the panel itself. And then, run THHN wires from the junction boxes into the panel proper. Except no grounds; the EMT itself is the grounding path. And guess what, the THHN wires get to be stranded wire, which means super flexible and easy to work with, and 1/3 less wires. What's not to like? Next time you're at a big-box store look at some of the stranded THHN they sell by-the-foot. Wouldn't you rather be working with that stuff?

These boxes are also a good place to put GFCI receptacles or deadfronts if you don't have room in the panel (or just want to pay $15 for a GFCI instead of $40).

All that said, in my experience panels are well-made for their purpose - protecting circuits and being easy-to-use and well-priced for users. If I was having to fight the panel, with wire cram, screw clampdown and sides bulging, I would call that "misusing the equipment". I can certainly see how you've set yourself up for failure, trying to expedite this CT upgrade on top of a spaghetti mess, with solid core wire to boot (making the sharing-CT problem dramatically harder). I would never put up with that. Have a house cleaning, and optionally, use my EMT/stranded trick.

I would not retire the old panel; I love my old panels.

Not the answer you're looking for? Browse other questions tagged electrical-panel code-compliance safety design or ask your own question.

0
Is this true about circuit breakers being out of phase in a house?
2
Any potential problems with re-numbering electrical panel?
1
Why do some spaces in my electrical panel not provide any power?
1
Ganged Circuit Breaker has strange ganging configuration. 40-[30-30]-40
2
ITE bus stab amperage limit for tandem breakers
0
Generator Transfer Switch for 2 Panels
3
Do modern, well designed circuit breakers and/or panels have a 25-40 year lifespan?
5
How can I replace breakers in a Murray panel with future upgrade compatability?
5
Does it mean that I have a bad service neutral when putting load on one of the legs, causes voltage fluctuation at the mains?