I have used 2 different brand of masonry bits.

I can not even drill one hole before it becomes dull.

I used both a regular drill and a hammer drill.

It's really important with any drill bit to know exactly what it does, preferably what it's made of, and how it works.

The original method of drilling a hole with a hammer and chisel was to take a chisel, place it, strike it, rotate, strike, rotate, strike, rotate. This was improved by using a chisel with an X tip, to help prevent the hole from slotting and the tip binding as a result. Hammer drills work the same way. Strike, rotate, strike, rotate, and they use many individual hits and rotate fast with high torque, which allows for a chisel type tip not to be an issue with binding, but an X shaped tip will still help, especially if you run into materials of varying hardness or metals in slab(Sometimes you'll just hit a piece of gravel in the concrete that came from an incredibly hard source). Harder hits will cause a less precise hole, but allow drilling through much harder/tougher materials.

I assume you are referring to this sort of thing: 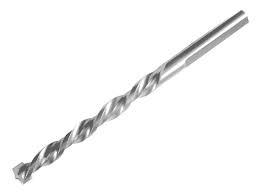 I also assume you've already evaluated what you're trying to drill through, and considered moving the hole rather than difficult drilling. Also think about what you're drilling into in terms of structural metal, sleeves/piping/conduit. If you're hitting metal in a commercial building it could be quite a variety of things. At home, a little forethought should prevent you from drilling into something you shouldn't.

This is a carbide tipped masonry drill bit. It has a shaft and flutes of softer, tougher, less brittle alloy, and the small piece or pieces of metal welded into the tip are blocks of carbide. The carbide is extremely hard, and because it is supported by something extremely tough, it can hit other hard things hard enough to break them without shattering itself. For this tool, there is often a very perceptible difference between high performance product and lesser versions, so if you bought the wrong cheap brand, you could end up with very short bit life on merit of lesser alloys or design quality. Usually when an HD bit dies it's from overheating the tip though. I've used a few 12" long 1/4" bits until the flutes were worn off without breaking them.

The hotter it gets(continuous drilling without coolant, particularly drilling into/through metals), the more rapidly it will wear. The bit heats up due to impact and tip friction, and side friction against the sides of the hole(frequently clear dust for deep holes and drill as straight as possible). When you drill into or through metals in slab this way, you create a ton of additional heat by repeatedly deforming the metal. Most metals are tough instead of hard, so drilling through them with an ordinary carbide bit is also time consuming as you are basically repeatedly deforming the surface of the metal until it flakes into a powder and finally gets drawn out of the hole.

You could be drilling slow because your tool is weak for the material, like a combination driver/drill/hammer drill. These kind of drills have normal chucks, and have the hammer drill function included as a secondary thought. A high end name brand drill of this sort can drill through low to medium strength concrete at a reasonable speed. If you only need one or two quarter inch holes, or if you're drilling into something like cinder block or brick rather than concrete, they're great because they use a large number of smaller hits compared to a dedicated hammer drill, which tends to blow out the core of the block less if you're not good at tailing off trigger when you're about to break through. I once made the mistake of using one (Milwaukee M18 at the time I believe) on high MPa concrete because I just needed one quarter inch hole for a plastic concrete insert. 20 minutes and 2 batteries later I had the 1" deep hole I needed. My smaller hammer drill(rotary only, good for small holes in close quarters) would have put that hole in in about 40 sec. without noticible battery depletion. My larger hammer drill slightly faster, but with shorter run time than the small one. 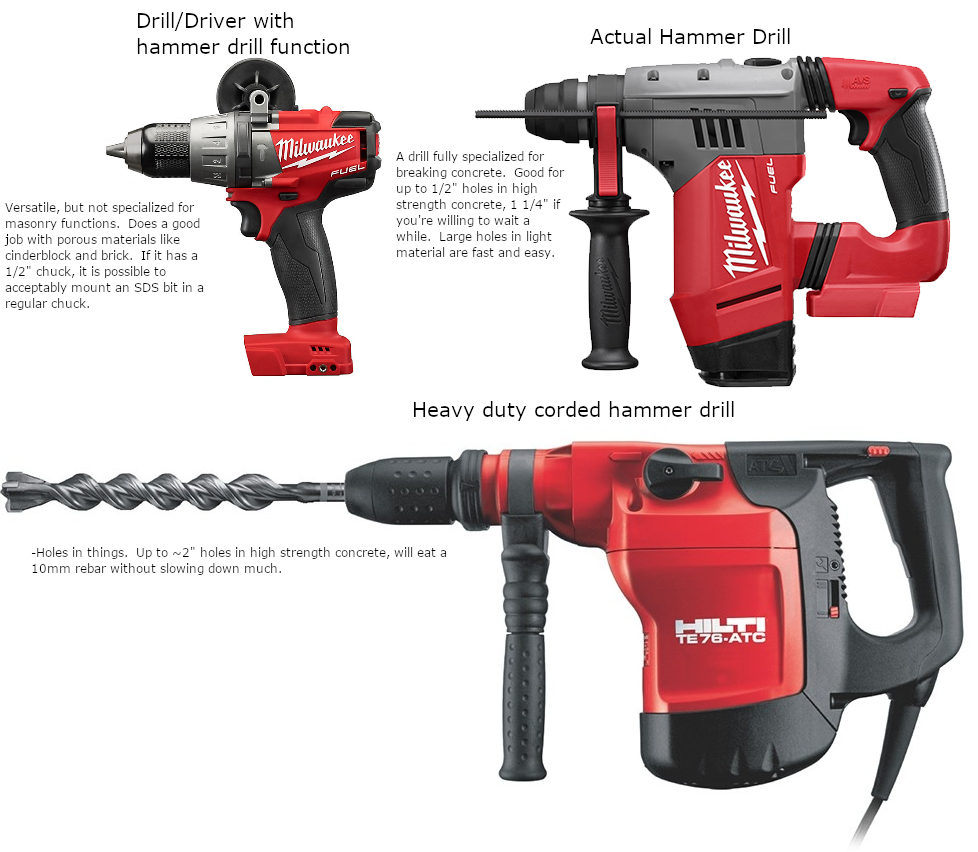 So check what's at the back of your hole, and if it's rebar, consider sacrificing a few ordinary drill bits to get through the metal (they'll get dulled up where they contact rock and when they punch through, but they're much faster to get the bulk of the metal out of your way, although still quite time consuming. If you're actually drilling concrete, consider getting or renting an actual hammer drill and getting a high quality bit with an X style tip like this:

And both the hammer drill and bit will use an SDS chuck/shank like the ones on these: 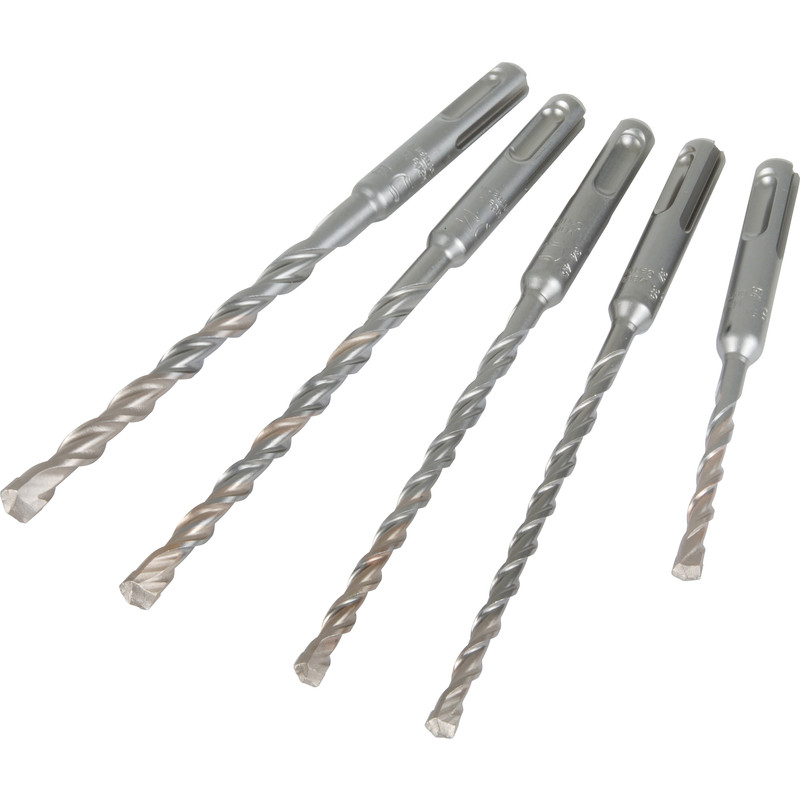 Also bear in mind how the hammer drill works. It delivers single rapid hits in succession. It has an advantage if it has a little bit of room to accelerate and decelerate the hammer and the bit, so if you're finding your hole is going in slow, be sure not to put too much pressure on the tool. You can listen and feel for changes and it's not too hard to tell(especially with larger bits and drills) when there is too much pressure on the bit or hammer and it starts to vibrate rather than strike. Combination drills with hammer function operate more or less by vibrating because of how the function has to be added in to an ordinary drill assembly, and they also spin more than is necessary, so be aware of how the tip is heating up if you pop it to high and start leaning in while you drill actual concrete instead of cinder block. At least one of my cordless hammer drills has a shock built in to the handle and includes in the instructions that if you are pressing hard enough to fully compress the shock, you're pushing too hard.

So usually it's best to use a good drill and a good bit, the right amount of pressure, periodic dust removal and bit rotation or cooling when necessary, be aware of what you're drilling into, and change to a regular kit(drill, cutting oil, HSS bits) if you hit metal your drill isn't suitable to drill through.

You can clear dust from deep holes with a turkey baster attached to a drinking straw, or a bulb with a tube attached if you need the permanent version. You can blow the dust out from the back of the hole periodically or before applying epoxy/adhesive.

Be aware that rebar is made of a mix of scrap metal and can have a wide variety of hardnesses and toughnesses as a result. Somewhere out there is a piece of rebar made from recycled Swords of Ancient Kings, and if you find you have to drill through it, you may have to switch to high quality metal bits, or sometimes just chip out the bar, cut it where you need it cut, reinforce and re pour the concrete. Other high quality metals, like tools, bits, occasionally fall into pours as well. I don't think I've ever hit one, but rebar isn't the only metal you might hit.

If you conclude you need heavier duty, the cheapest option for the power level is a decent corded SDS hammer drill, and if you want battery powered it costs more to get a kit set up, and drills have different purposes based on size, so be sure to get one that's up to the duty you need. The new generation of brushless 18V power tools compare nicely with similar size corded tools, and the higher voltage/larger versions are even better. If you want to chip large jobs or break up slabs, you end up switching back to corded.

If you are using even a decent masonry bit in a hammer drill and they wont go into the concrete then you must be hitting a piece of rebar or similar item embedded in the concrete. If that is the case, masonry bits will not cut through a piece of metal. Try another hole in a different location. With a hammer drill you only have to use a medium pressure on the drill to get penetration. Let the hammer drill do a lot of the work. 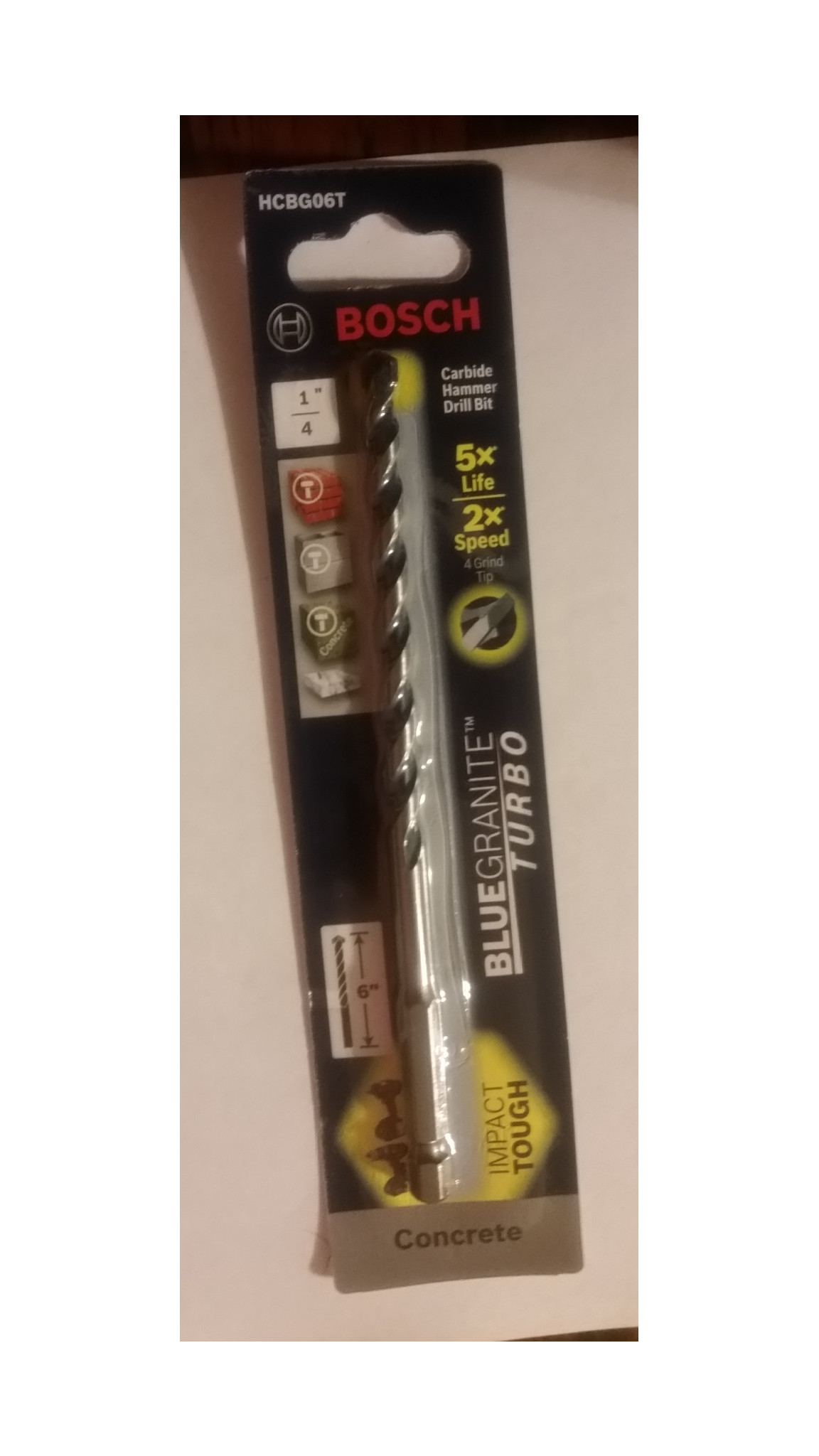 Not the answer you're looking for? Browse other questions tagged concrete drill or ask your own question.