What to use as void filler behind between shower's studs & cement underlayment board?

I am in the middle of remodeling my bathtub/shower surround. For my tile underlayment I chose hardibacker, and the appropriate hardi screws. A youtube video series that I am using as my tutorial is not using hardibacker, but rather denshield. In his tutorial, he uses liquid nails as a void-filler behind the denshield. He stresses this is not a good idea for hardibacker or durock.

So, while at my big-box home improvement store, I went looking for a construction adhesive that claimed to be compatible with hardibacker, and could not find one. In fact, I found several that explicitly said not to use with cement backerboards.

And yet, the idea of a void-filler seems very important; my home builder did not see fit to use meticulously dimensioned lumber for my studs, so there are certain to be voids.

Is there some formulation or brand of construction adhesive that is known to bond well between hardibacker and pine? If not, what should I use?

EDIT #1: I'd like to add that Hardie's own tutorial video does not use a void filler, but also demonstrates on a wall that uses comically perfect studs.

EDIT #2: I think people may be confused by my question here, so I'm adding a picture to demonstrate. The lumber shown behind the backerboard is sistered to the stud in the corner. The sister was added by the original contractor to support the wallboard at this corner. My spirit level shows the sister to be plumb, above the top of this backerboard.

And yet, you can see light from my flashlight shining between my straight-edge and the backerboard, over that sister. This is because, at this particular location, the sister stands shy of the studs to the right of it. Farther down the backer board, the sister lines up very well with the next stud, so no light shines through. Since the sister seems to be plumb overall, I believe at this location it is slightly non-straight. And that is why I am asking this question about void fillers. Without a filler, when I run a screw in this corner, the backerboard will bend and I will no longer have a flat surface to set my tiles to.

(The size of the gap shown is about 1/16". As a consequence, my straight-edge will rock at that location.)

"You are being too much of a perfectionist" could be acceptable to me as an answer, so long as it is correct. However, the advice I've heard is that flatness of the backer substrate is one of the most important details to ending up with good results for tile work. 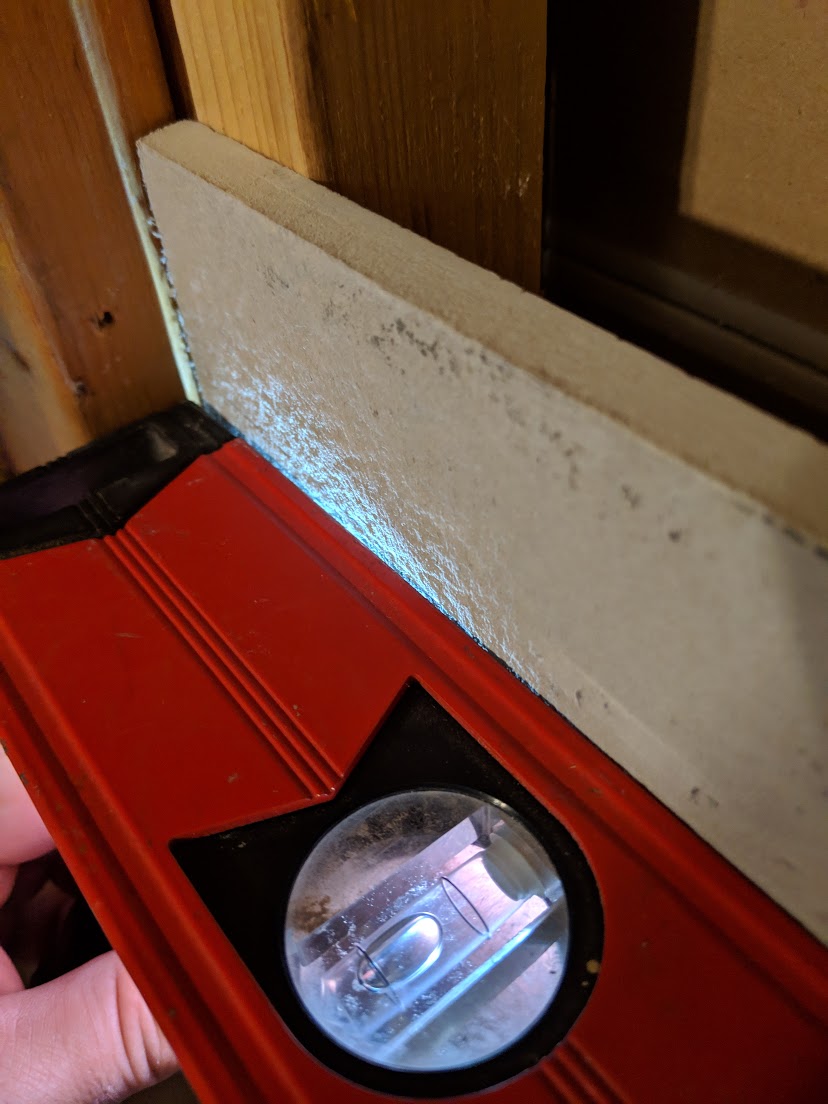 Browse other questions tagged studs adhesive cement-board or ask your own question.

1
How can I smooth a seam between cement board?
7
What cement board can I use for an outdoor bbq?
3
What should I do about excess flex in cement board that will be behind tile?
5
how critical are distances between studs?
1
Backer board bowing on 24" inch steel studs for rock ledger panel installation
1
Can I use mortar to transition a height difference between cement board and drywall?
1
Horizontal blocking behind cement board necessary on edges(wonderlite specifically)
0
What are your drywall/cement board/framing flatness tolerances for tile supporting walls?