I just purchased a home built in 1978 (I literally moved in last weekend.) This is my first home purchase, and I tried to do as much research as I could -- I had it inspected, and the inspector found some cracks and mentioned they were probably just settling with a home this age. The appraiser hired by the organization financing my loan rated the condition of the home as C4/Q4 as "some minor deffered maintenance" and "meeting or exceeding applicable building codes", and also marked "no" for all the of the "has settlement/foundation problems" boxes.

When I moved in, I noticed the hardwood floors in my office (downstairs, east corner) and the linoleum ones in the kitchen (downstairs, west corner) were bouncier/shakier than I'm used to. I braced the one in my office by adding a beam made of 2x4s across the joists with a small jack post in the middle (Not super tight, I wasn't trying to raise anything up, just make it feel stiffer.)

I've inspected the floor joists as well as I can, and I've found no rot, cracking, etc. They all seem solid.

My concerns increased greatly when I set up my washing machine -- on the concrete slab in the basement, which is under my office -- when it went into it's spin cycle, my entire office began to shake. This felt wrong to me, as the concrete slab should not carry that much vibration up and into the house, should it?

There are a few doors in the home that are slightly sagging on one side, maybe by 1/8th to 1/4th of an inch, and there are a couple of small cracks in the drywall extending from the corner of two doors -- one in my office closet, and one in the upstairs bedroom -- the bedroom on the same side/corner of my house as my office.

The slab in the basement has some cracking that has been repaired, and I know there was some minor water infiltration issues in the past, but they were fixed and the inspector found no evidence of recent water issues in the basement. It has been the wettest year in probably the past 10 where I live, so I feel like if the basement were going to leak, it would have done so already.

I've attached some images of the concerns I mentioned above -- I don't know what to do here. I'm extremely concerned because I just bought the place, so I have no equity to fall back on if I need an expensive foundation repair.

Should I start looking for a structural engineer, or am I being paranoid? 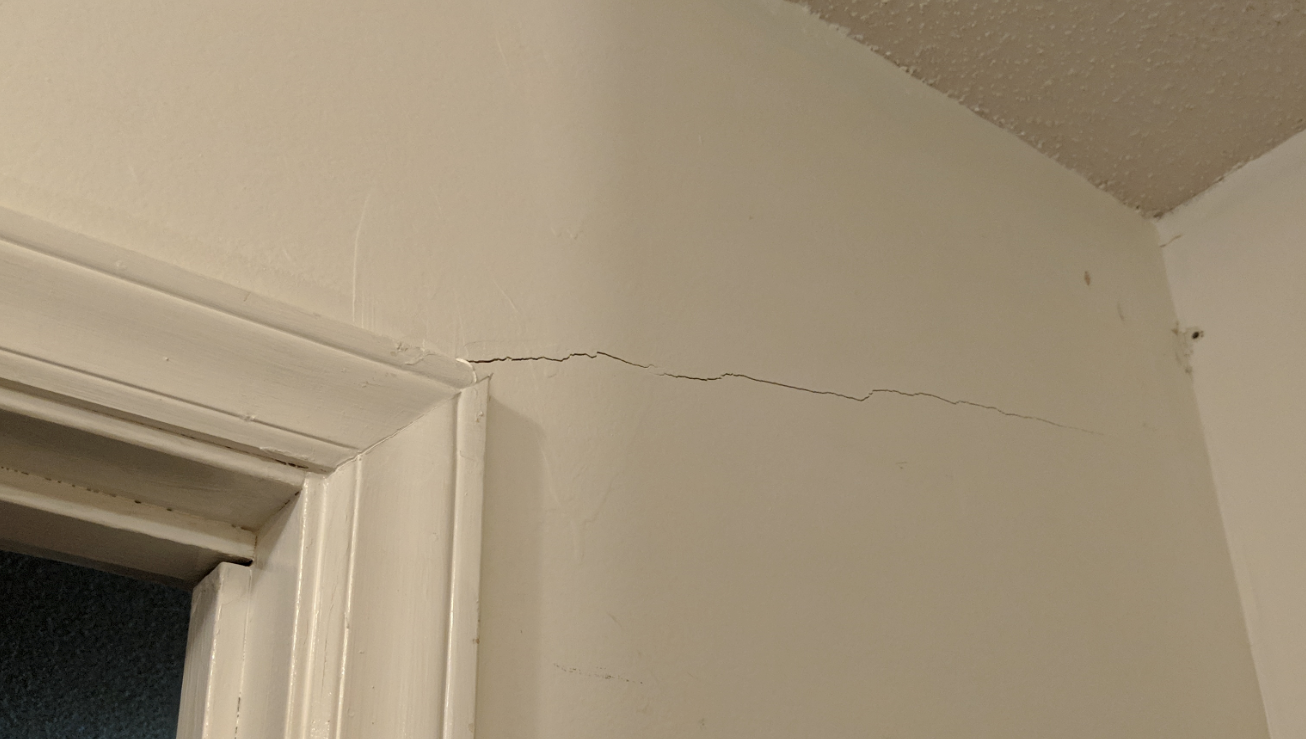 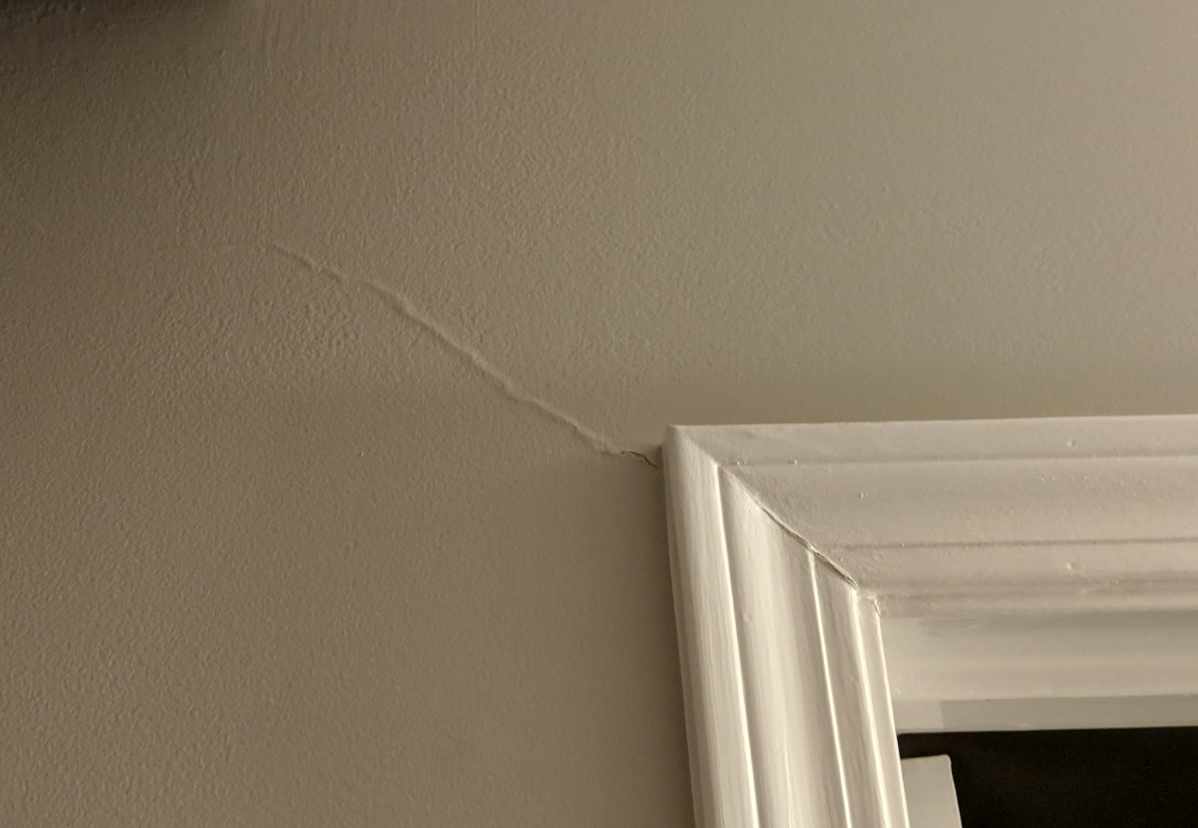 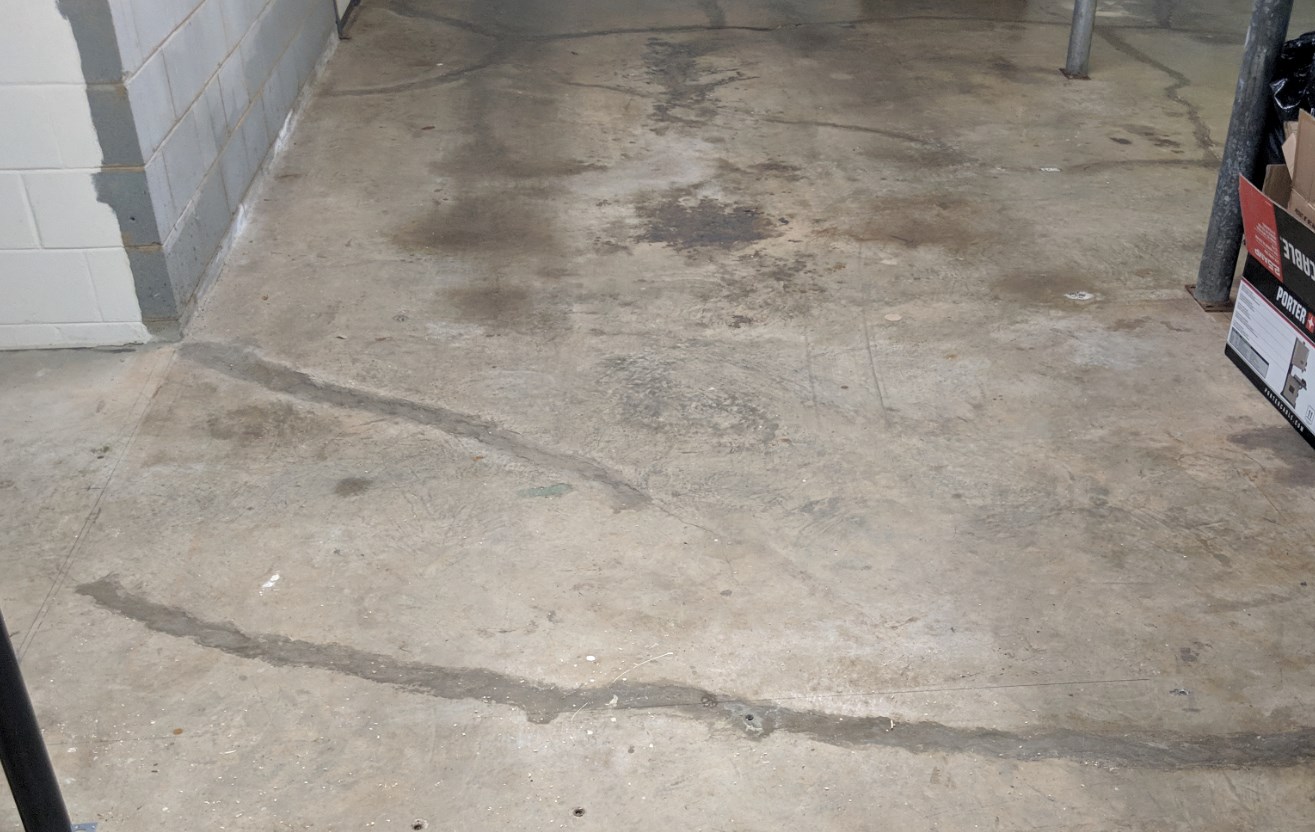 Update: So, I wanted to add an update here for anyone else who may have similar problems. I had a contractor with years of experience that I trust come in and look at everything. We discovered a couple things, firstly, at some point there was a load bearing wall in the basement that someone removed -- and replaced with a couple of inadequate and poorly-positioned posts. This caused the center of the house to sag slightly -- but the foundation seems okay. I got a few more posts, put them in better locations along the beam that runs along the center of the house, and I plan to eventually rebuild the wall that was there at one point. I likely won't try to jack anything back up -- because the contractor said that could cause things to crack more since it's settled how it is -- but it should be fine and stable now with the added support. As for the cracking in the cement wall -- we discovered it was three blocks -- not the whole wall, that are pushed in very slightly near/just under the ground line outside -- he suspected that our two very wet past winters resulted in water seeping into the ground, freezing, and pushing those block in a bit. He said that as long as I don't start having water come in there (which so far there has been none despite very heavy rains lately and a high water table), and they don't continue to push in, it's nothing to worry about.

Floor bounce is often a factor of the spacing and span of the joists. Assuming you are in the US, there was a time in the 70s when the building codes were still based on the pre-WWII lumber strength data. But after the baby-boom era in the 50s and 60s, most of the old growth trees were harvested and lumber was coming from new faster growing trees that were not as strong. Eventually the "Floor Joist Span Tables" that are used in the construction industry were updated to reflect this, but the lag time meant a lot of wood frame homes built in the 70s have more "bounce" than older ones or newer ones. It's not necessarily bad, it's just different than you might have experienced in a newer or older home. I have a home built in 1971, I noticed it the day I toured it before buying and I researched it, thinking that the home was defective. But the spans and spacings were correct, for the time it was built.

The vibration from the slab and the cracking may be due to the type of soil you have. Clay soils tend to change a lot each year as they absorb water in the winter and dry out in the summer. My house is on California Adobe soil, in the winter and spring I can feel vibrations coming from transformers in a utility substation 1/2 mile away, but by June or July, I can't feel them any more.

Not the answer you're looking for? Browse other questions tagged basement foundation cracks or ask your own question.

22
Is my rapidly failing foundation dangerous?
3
Foundation repair: time frame
2
What's the best way to get grade below foundation wall?
2
Bought a 20 year old house last spring and it appears to be settling - when to call in experts
0
New home foundation
1
20 year old home with ceiling cracks getting worse
1
Does water-proofing have structural benefits in cinder-block foundation?
0
Our builder has tried resolving our foundation, walls & floor cracking for 7 years but it's worsening. How can we get it resolved or our $ back?