Can I replace an old exhaust fan and connect it to an existing light switch?

I just purchased a new home and in one of the bathrooms there is an old exhaust fan and two light switches. There is a recessed light located in the ceiling above the shower and another light above the sink, each on their own switch. I would like to wire it so that when I turn on the light in the shower, the fan also kicks on. If possible, I would like to put it on a timer so that I can set it for a certain period of time in order to run the fan while I am away from the house? Is it possible to connect both the light and the new fan to the same switch?

Without knowing more about the current wiring, it's hard to say exactly what you'll have to do. I'm assuming the feeder from the panel enters at the switch, but I'll try to cover some other situations as well.

Power at the switches

If the power enters at the switches, you should already have a feeder cable (probably 14/2 with ground) coming into the box. There will then be two (again, probably 14/2 with ground) cables leaving the box. The cable that enters will be spliced (or pigtailed), on the black (hot) to feed one side of each switch. The white (neutral), will be spliced and connected to the white wires of both exiting cables, The bare ground wire will be connected to both switches, both wires exiting the box, and possibly the box itself. You won't have to worry about the light over the vanity, since that will not change. You will, however, have to add an additional cable between the light in the shower and the fan.

Without seeing the location, it's difficult to say exactly what the best method is to run this cable. Though if you have access from above, it should not be that difficult. Start by turning off the power to the circuit at the breaker. Once you've run the cable, connect the fan. Black to black, white to white, bare ground to green or terminal screw. At the light over the shower, you'll have to again connect black to black, white to white, and ground to ground. If the light uses screw terminals, you'll have to use pigtails to make the connections. To do this, simply remove the existing connections (making sure to remember what went where). Use a wire nut to connect the wire that was connected to the fixture to the wire in the new cable, and a 6" bit of scrap wire. Then connect the 6" pigtail to the fixture, and repeat for each wire. It might be helpful to do one set of wires at a time, so all the wires are not disconnected from the light fixture at the same time. 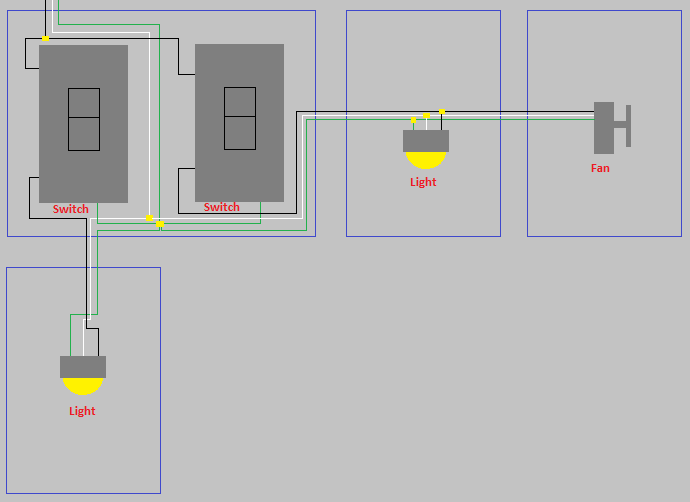 Finish by reinstalling the fixtures, and turning the power back on.

Power at the lights

This is less common, though may be the case if the lights were not installed at the same time. In this case, you'll have a feeder cable (from the breaker) entering both light fixture boxes (or possibly only one, depending on the setup). In this situation, you have two separate circuits (that may or may not be controlled by the same breaker, so be careful). Again, we'll only have to worry about the switch and light over the shower. 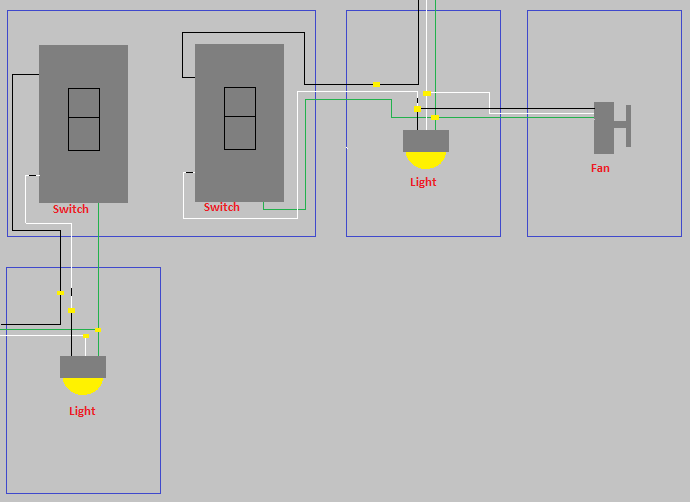 Finish by reinstalling the fixtures, and turning the power back on.

If the fan was controlled by another switch (or whatever), you'll have to trace the feeder back to its source, disconnect it, and cap the wires. You don't want to leave live wires hanging around in the walls.

I mention wires by color, but keep in mind what I say and what you see might be completely different. The descriptions and diagrams I use are for a typical installation, there is no telling what was done by a previous owner. Make sure to verify what each wire is, where it goes, and where it comes from.

If you'd like the shower light and fan to be controlled by a timer, you can swap the current switch out for a timer (there are many available). Just make sure the timer is rated for motor loads, since you'll be running the fan motor off of it.

As always, if you do not have the knowledge or tools; or are simply not comfortable doing the work, please don't hesitate to call an Electrician.