Here's the setup in our kitchen. On the left with two brown wires is the disposal switch. On the right is a switch for an over-the-sink light.

I would like to put these into a dual (stacked) switch, and add an outlet in the other space. Is this possible? Secondly, might anyone have a description or pic of how that wiring would look? Thank you in advance!

The bottom pics are of the outlet under the sink - with the top outlet being the switched disposal and the bottom being for the dishwasher, which has a separate switch in the breaker panel. 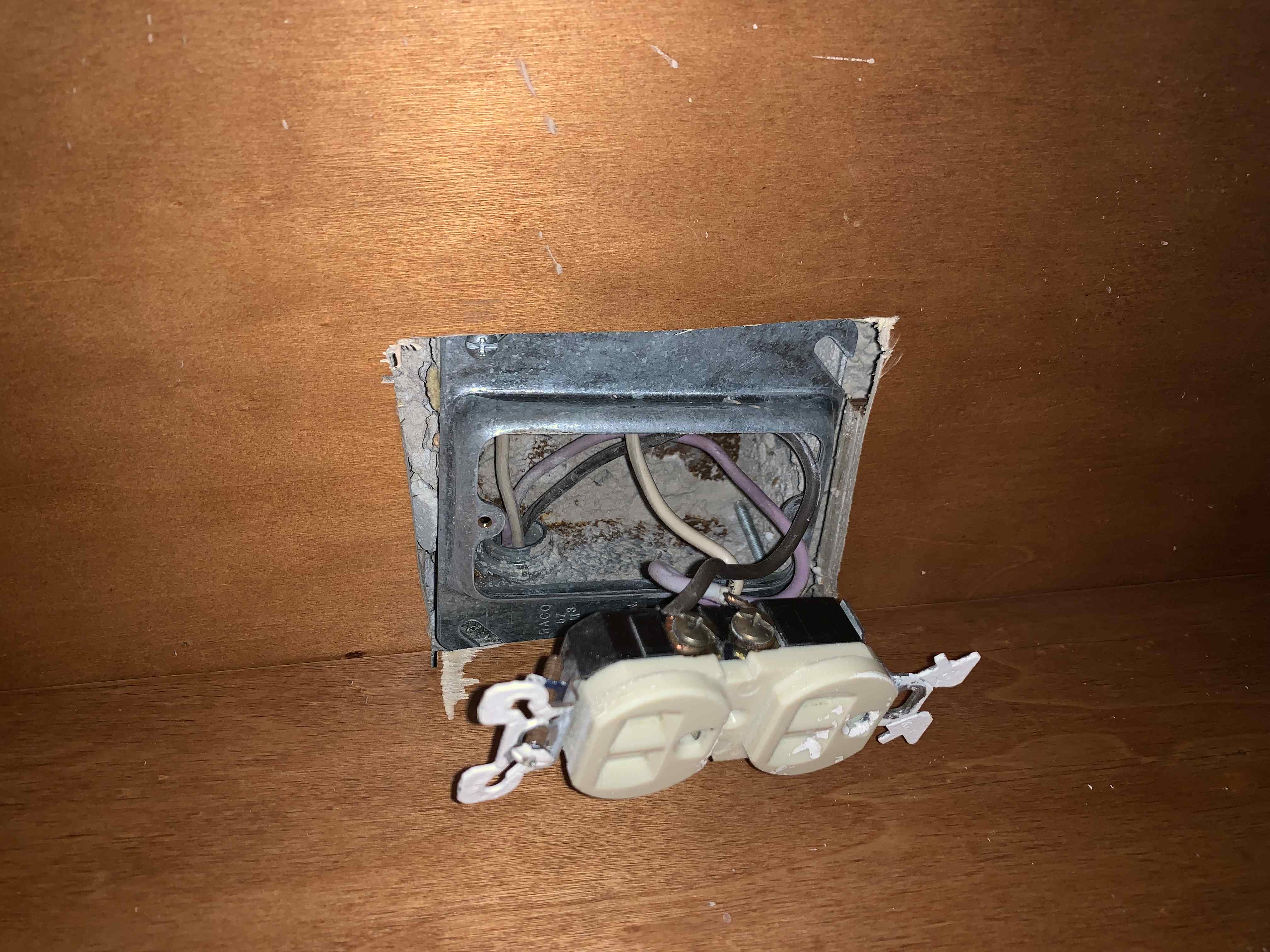 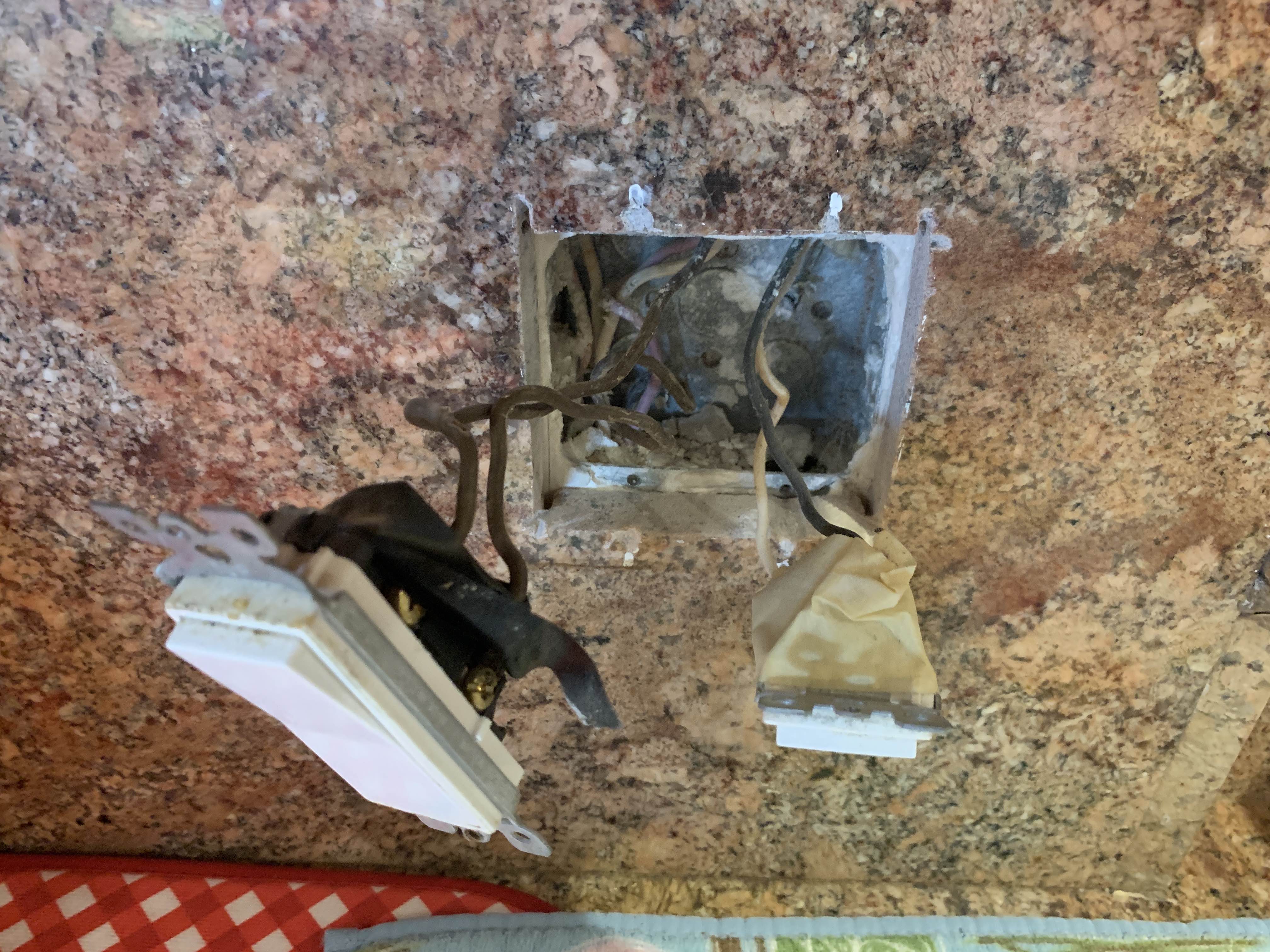 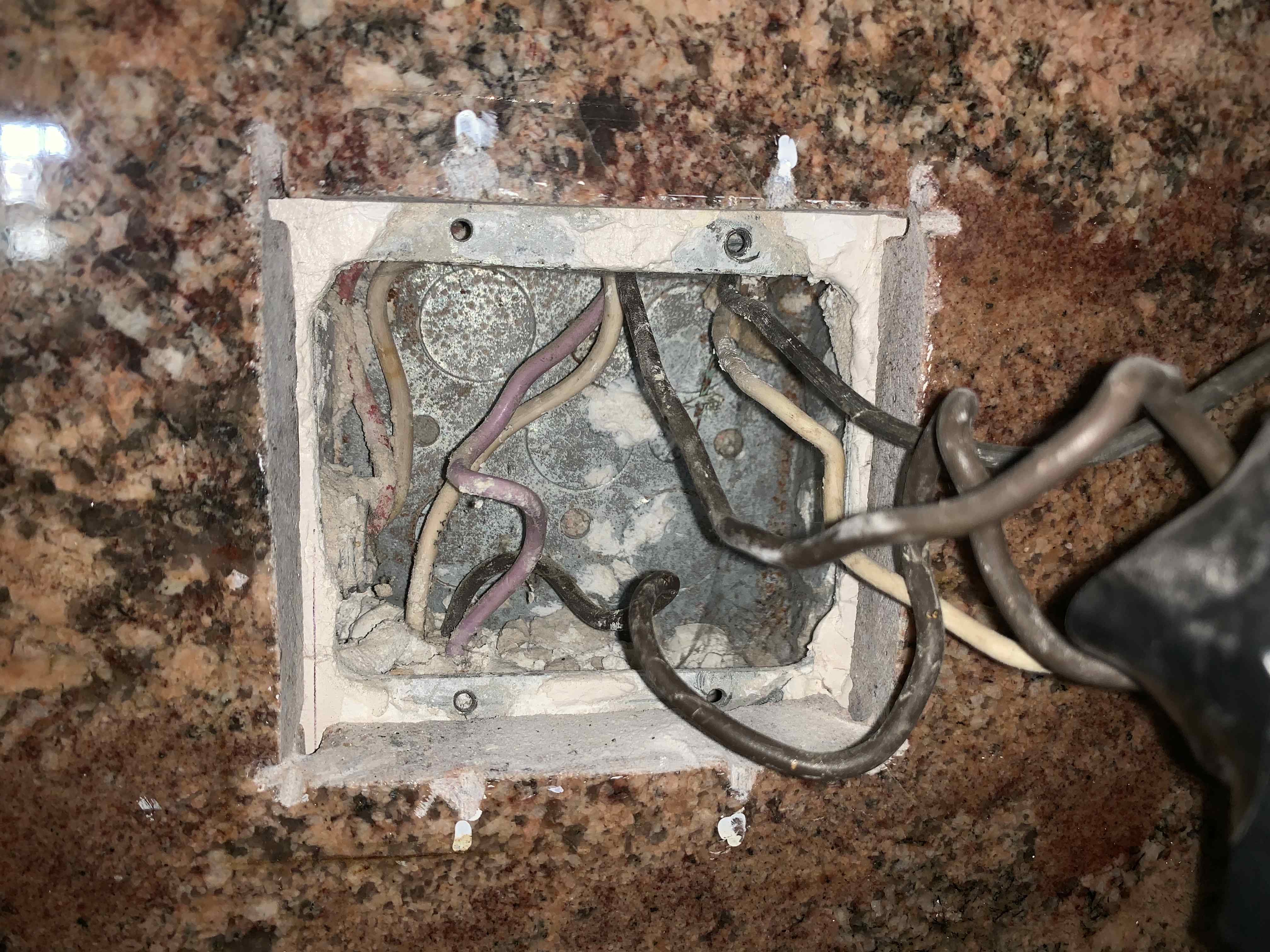 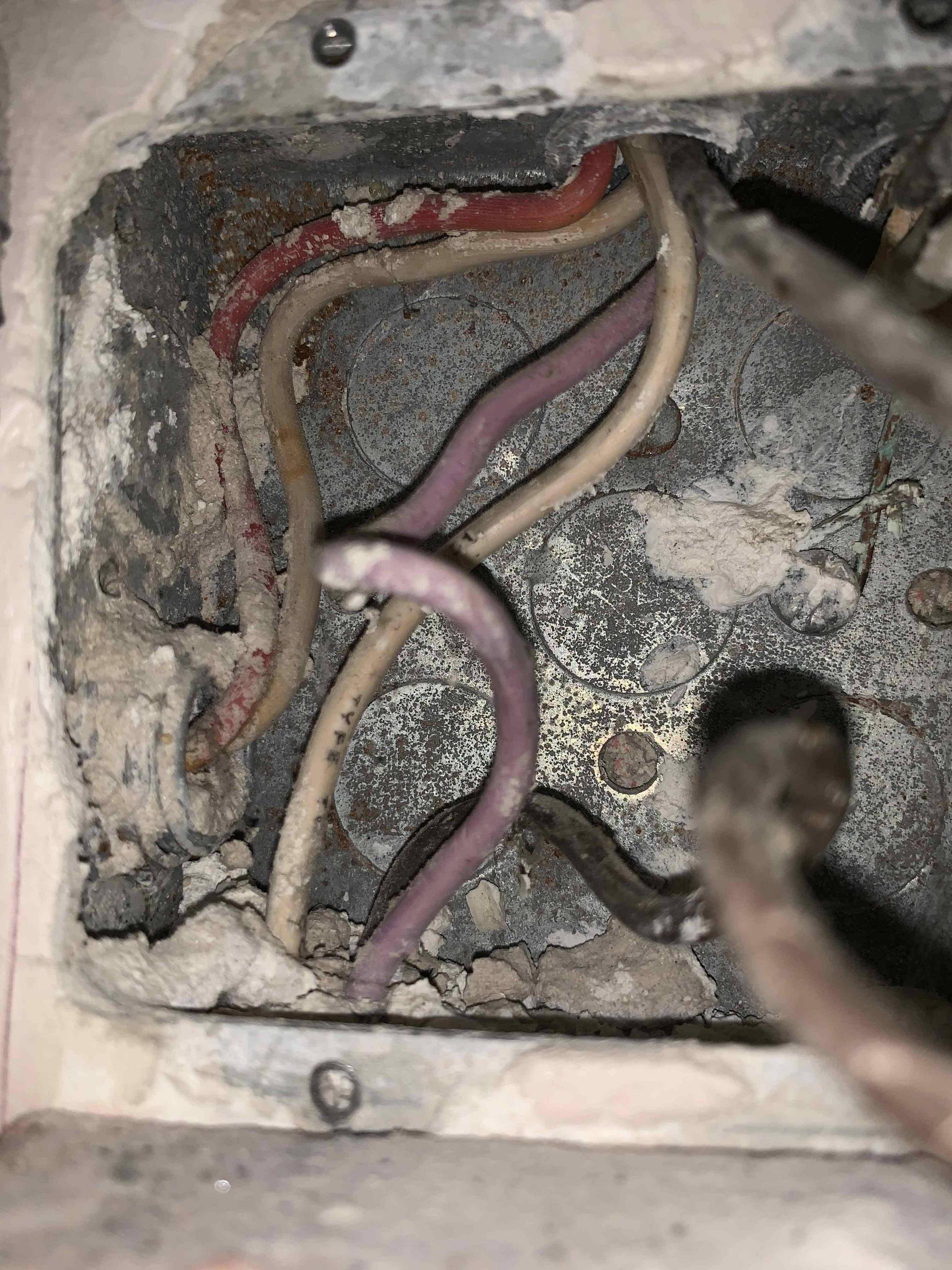 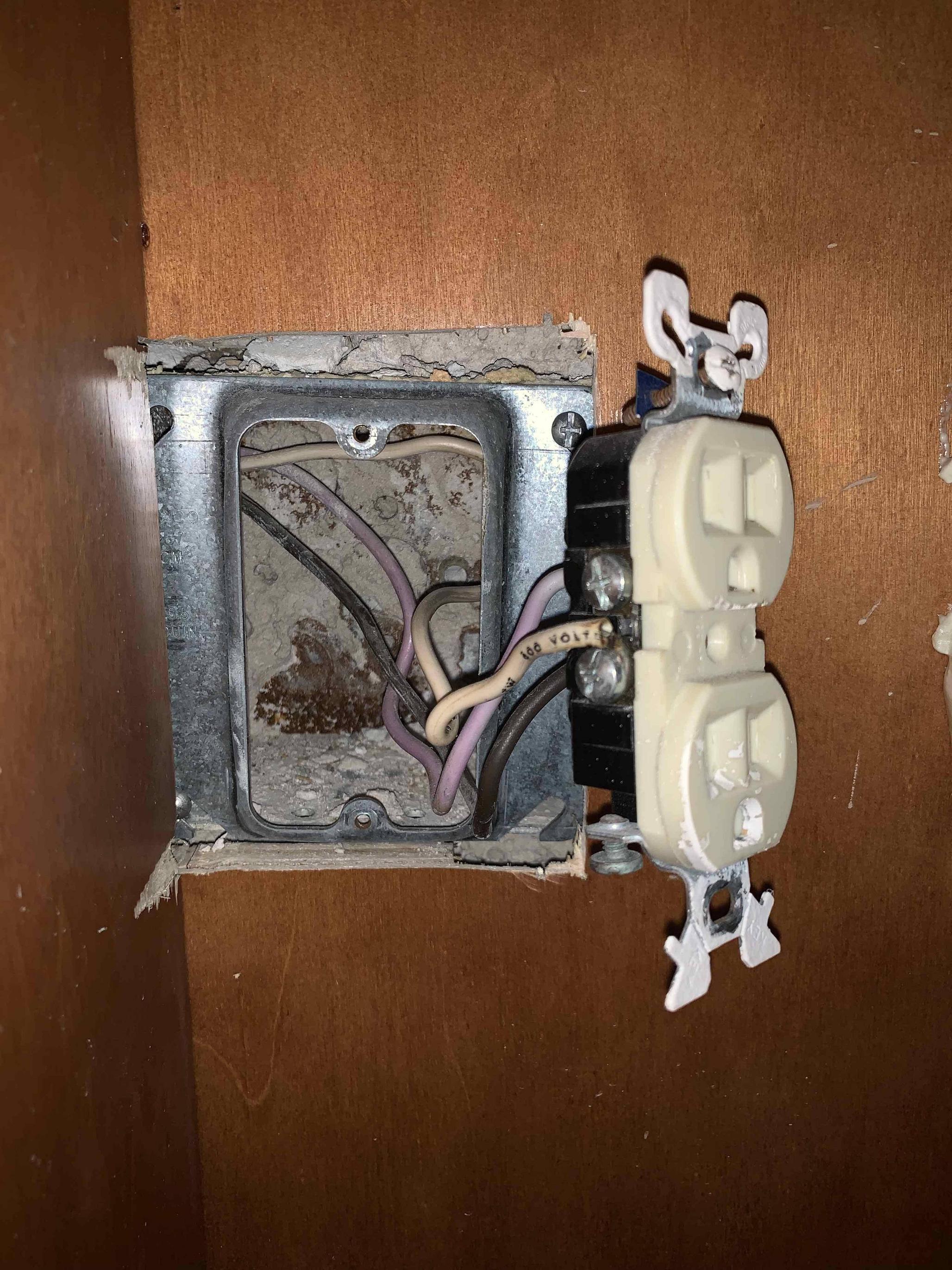 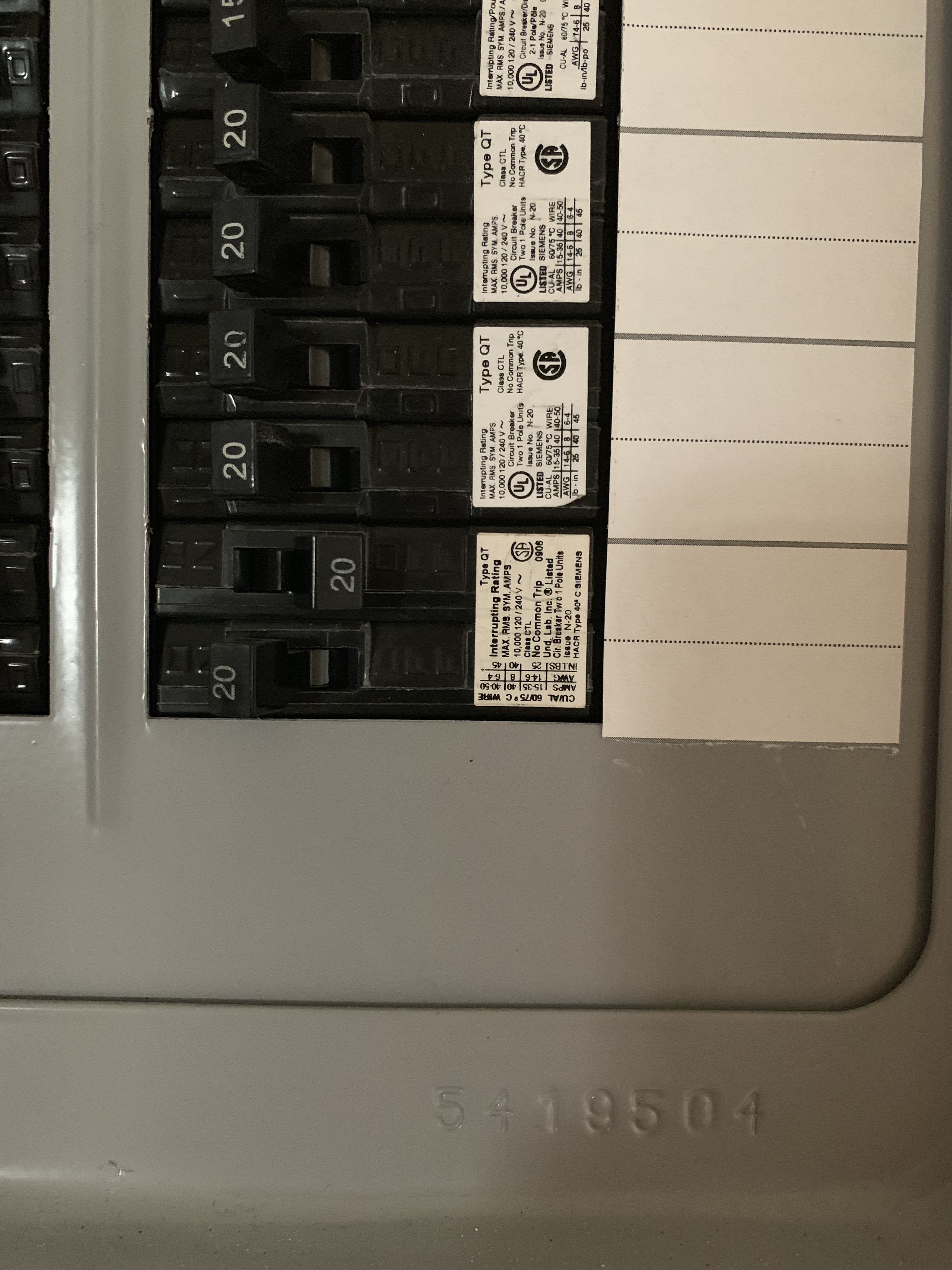 I don't know if there is any code regarding "disposal switch next to light switch". Obviously you have that right now. But two smaller switches is even more "a bit close for comfort". Personally, I am used to the only switch right near a sink being for the disposal. I would be concerned that having two switches next to each other could result in accidental use of the disposal, which can be a bit dangerous to objects that have fallen into the drain.

It all depends on what is currently in the box. There are basically two ways a switch can be wired:

The problem is that a switch loop doesn't, traditionally, include a neutral wire. You need both hot & neutral to power an unswitched device and also for powering many smart switches, timers, dimmers, motion sensors, etc. The NEC now requires neutral in switch every switch box, but older installations are exempt and there are several exceptions for various reasons as well (generally where it would be easy to add a neutral later).

The switch on the right looks very clearly like a switch loop. Two wires coming in, black & white. So you almost certainly can't grab power from there.

However, the switch on the left appears to have additional white wires, presumably neutral, in the back. The "brown wires" are likely to actually be black (though any color other than white, grey or green can be used as hot). So it looks like you have hot/neutral in, hot connected to switch, neutral patched through to disposal, switched hot to disposal. If that's the case then you can:

These switches are on separate circuits. They must never touch or cross.

To really get the picture, it would be nice if there was a divider in that box.

It is not possible to put a receptacle on the lamp circuit because it is a switch loop.

What else is on the circuit with the disposal? If the hardwired loads on the disposal circuit total 50% or more of circuit capacity, then a receptacle is not allowed on that circuit.

Also if it serves any receptacle locations not in the kitchen, a kitchen countertop receptacle is not allowed on that circuit.

Edit: So you're OK. Son of a gun. This house is wired in conduit.

Turn the power off. This is harder than it sounds. We must shut off 3 things: First, the light circuit, because we'll be handling it. And second, the disposal circuit BUT-- it is part of a multi-wire branch circuit and we must also shut off the other half, because we'll be messing with its neutral, and the other half needs that neutral. If the disposal is a 2-pole breaker as it should be, we're all set; otherwise turn off frickin' everything...

First, get those rocks out of the box. What is with junction boxes and rocks anyway? You really, really don't want rocks falling down into the conduit pipes.

Second, note the lower left conduit, and the upper center conduit. Those are involved in this circuit. Figure out where they go in each direction. I would gather one direction (down?) goes to the garbage disposal and is quite close. That'll do. Push and pull the wires to make sure they are connected.

When you identify the black wire that goes from the switch to the disposal, mark it with red tape near both ends - this will be a timesaver later.

At the disposal, unhook the white wire from the disposal and straighten it. Lay it alongside the new white wire for about 6". Lash them together with electrical tape starting at the wall and before they start to overlap. Leave the tail end of the tape so you can unravel it later. You'll be using the old wire to "pull" the new wire through the conduit.

Now try pushing the wire(s) up the pipe, out of the disposal box. Likely this will only go so far (it'll be stiff, it's solid).

Then, at the switch box, grab that white (between top center and bottom left conduit) and pull it out slowly, making it draw wire from the disposal side, so it sucks in the new wire. If it hangs, tease and twist it, don't brute-force it or you'll separate the wires and really be up the creek!

Now, back at the switch box, you should have some extra white wire. Cut that off so it sticks out about 6" beyond the end of the wall. Get ready to make some pigtails; for black pigtails wrap the white wire with black tape.

Hey, why are we pigtailing neutral? Can't we just use the 2 screws on the receptacle? No. See that purple wire? That's why pigtailing is mandatory. It's surely the other half of a Multi-wire branch circuit and you must be able to remove this receptacle without severing neutral to the purple half of the circuit.

Hey, why are we pigtailing hot? Can't we just use the 2 screws on the receptacle? Sure.

On the old disposal switch, remove the black wire that isn't tagged red, and replace that with a black pigtail.

Plug a coffee grinder or something into the GFCI. Get some rubber gloves on, and turn the power back on. Carefully test that the switches work, GFCI powers up, and coffee grinder works.

Awkward as hell, but a very, very useful intermediate checkpoint.

The switch will be delivered to you with a common "hot". You will need to either "break the tab" or something. Use a switch where the separation between switches is clear. I've seen switches where it's very confusing; those will backfire on you. You must break off the tab before you start.

By the way, if each half of the switch has 2 brass and 1 black screw, that's a double 3-way switch. It isn't wrong, but completely ignore one of the brass screws in each section. If you don't like which way the switch throws, switch to the other brass screw.

Move the two wires currently on the disposal switch, onto one switch on the dual switch. Doesn't matter which. Stop. Go no further.

Now turn the power back on, don the rubber glove, and test whether that switch actually works. If it doesn't work, you are very lucky to have caught it now.

At this point, there should still be 2 empty terminals on the new switch. Move the 2 wires from the light switch there.

The way your under-sink outlet is currently wired is known as a Multi-Wire Branch Circuit (MWBC), where two opposite poles 240V apart share a single neutral. One of the poles is wired through the switch to the top half of the outlet for the garbage disposal, and the other pole is wired to the bottom half always-hot for a dishwasher.

To add an outlet in the current box, you'll have to turn off BOTH circuits at the breaker box (ideally they should be handle-tied or common-trip). Then, gently pull some slack of the white wire from the bottom box up to the counter (it looks like you have enough length in the bottom to make this work without replacing the wire). Then, cut the white wire at the counter box, grab another scrap of white wire about six inches long, and wire-nut all three together. The new pigtail will be the neutral for your new outlet. Then remove the black wire from the top of the current disposal switch, and wire-nut two pigtails to it, one for the hot on your new outlet, the other for the input to the switch to the garbage disposal.

On your new split switch, you must keep both circuits separate. Make sure you know which screws of the switch connect to which half. On the half you want to control the disposal, connect your new black pigtail to one of the screws, and the black wire from the bottom of the old switch to the other. Connect the white and black wires from the other circuit to the other two screws.

On your outlet, wire the other black pigtail to the brass screw (or the one labeled Hot/Line) and the other to the sliver screw (or the one labeled Neutral). The ground for the outlet is provided through the conduit -- you can either get a "self-grounding" outlet which grounds through the screws, or pigtail a bare wire to the box using a grounding screw. Note that this must be a GFCI outlet unless you have a GFCI upstream.

EDIT: Now that you've posted breaker panel pictures, it's become apparent that your MWBC is DANGEROUSLY MISWIRED! Don't try to add an outlet to this circuit until this is corrected, and indeed, don't even run your dishwasher and garbage disposal at the same time until this is fixed. See Harper's answer here for more details of what's wrong: Why are tandem breakers on shared neutral (MWBC) problematic?

Not the answer you're looking for? Browse other questions tagged switch kitchens or ask your own question.

5
Why are tandem breakers on shared neutral (MWBC) problematic?

6
How should I wire a GFCI outlet and a switch to isolate the switch but provide GFCI protection further in the series?
1
How do I wire a gcfi outlet in this situation?
0
No neutral kitchen wiring
2
Feed-through vs. non-feed-through GFCI for kitchen backsplash?
1
Kitchen wiring issue
2
Can two kitchen disposals share a circuit?
2
Found mismatched breaker and wiring while replacing kitchen outlet in older house
0
Help with re-wiring a two circuit outlet with one controlled by switch
2
Adding an outlet to the dishwasher/disposer circuit
1
Garbage Disposal Rewiring and Switch to outlet transition