So, there's this pipe sticking out of the wall between my garage and the front porch. Occasionally, an amount of water seeps out of it, enough to pool eventually though I've never seen any water "running" out of it, unrelated to any weather, seems clear (though when the pool dries, there seems to be some residue left behind).

I have no idea what it might be draining from. There is nothing on the garage side of the wall (though the water heater/furnace is along that same wall in another corner, maybe 15' away).

Any input would be appreciated, and most importantly - does the draining indicate some problem that I need to deal with? 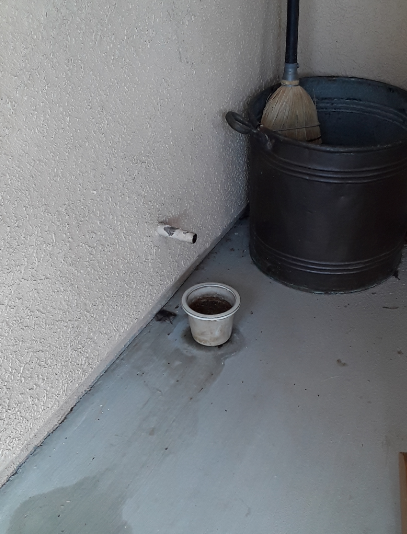 Thanks to all who provided input. It looks like a lazy contractor pushed the drain line out the wall at the point of the concrete patio, instead of running it another 10' where it could have been pushed out the front-facing garage wall (where the drip would have landed on dirt).

I'll get a HVAC/plumbing guy to come and answer the question (what appliance is being drained, whether the amount draining indicates some kind of soon-to-be problem). But yes, management of any outflow will be dealt with via a planter of some kind, rather than redirecting the line at this late date.

For those who might be curious, I captured outflow for the last 7 hours (0630-1330): 26 oz of clear water, no visible residue. Over that period, used water heater (hubby ran a large bath, I took a long shower, ran dishwasher) and the furnace (relatively briefly after being off overnight). What that might tell anyone, I have no idea (!) but there it is.

I would bet against this being the regular drain for the air conditioner/furnace. The A/C creates a lot of water, and only the most inept remodeler would allow that to drain on a finished porch like that.

I had almost the same situation in a house and the dripping pipe came from the water heater's temperature/pressure relief valve and that had to be replaced ($20, not bad). The other option would be that it is from the A/C but its the secondary "overflow" drain that drips when the main drain is clogged. These are sometimes placed in visible areas so that you can see them dripping.

To answer your last question, I would assume that yes, dripping from such a conspicuously placed pipe does indicate a problem that should be addressed.

That looks like a condensate drain from your Air Conditioner or Heat Pump. When you chill air, condensation forms on the coils and must be safely removed from the unit, otherwise you get mold growing on it. typically this is piped out to some innocuous area of your exterior wall where it doesn't pose a nuisance. If this is going right out to your front porch, someone was being inconsiderate in the design. I would just get a bigger bucket or decorative "flower pot" for it, moving it now would involve tearing open the walls.

Not the answer you're looking for? Browse other questions tagged water drain pipe exterior or ask your own question.

3
How can I identify the source of a leak at the hot water heater?
1
Should I use a separate system, or extend the existing system to heat a detached garage?
3
What is this pipe coming up out of our driveway?
1
Tub drains very slow
3
Was my exterior door installed backwards
0
How can I extend this clothes washer drain pipe to reach the sink?
1
I12 eccotemp tankless water heater
0
What is this pipe coming from the basement wall?