The combo panel is Siemens and comes with (1) 200A breaker that feeds the installed bus (which has feed through lugs). It also has a provision for another 200A breaker.

Question: Is there a requirement for the bus on this type of panel to have a dedicated breaker -OR- can the feed through lugs be used directly from the meter side to power the bus (as shown in the picture), then the breakers on the bus (100, 70, 20) used as disconnects for the respective panels/outlet? Can a breaker be used as a disconnect?

The reason I would not want to power the bus with a dedicated breaker is that in the event the VFD needs to cut power to the panels, they could still leave the well house powered and have use of the water. 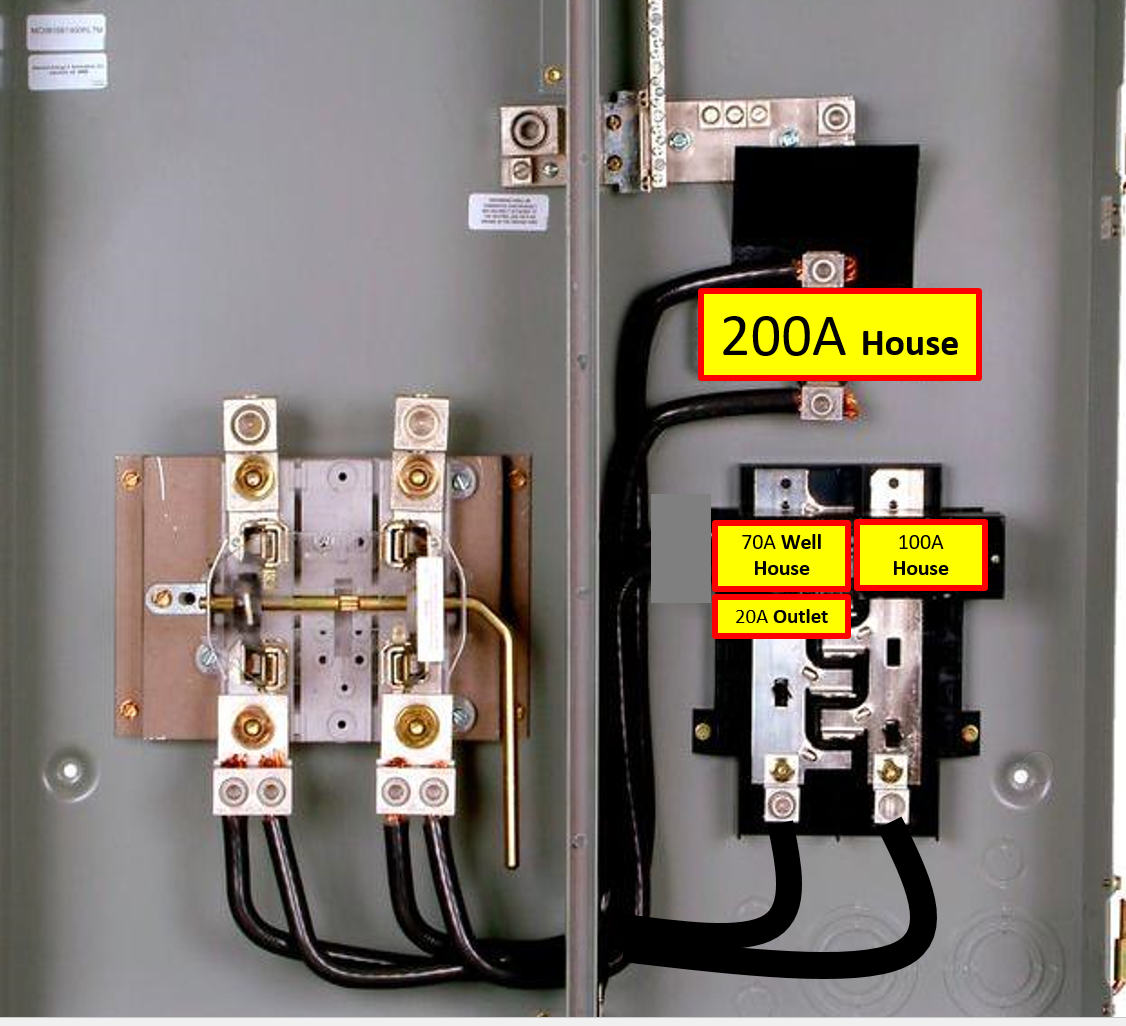 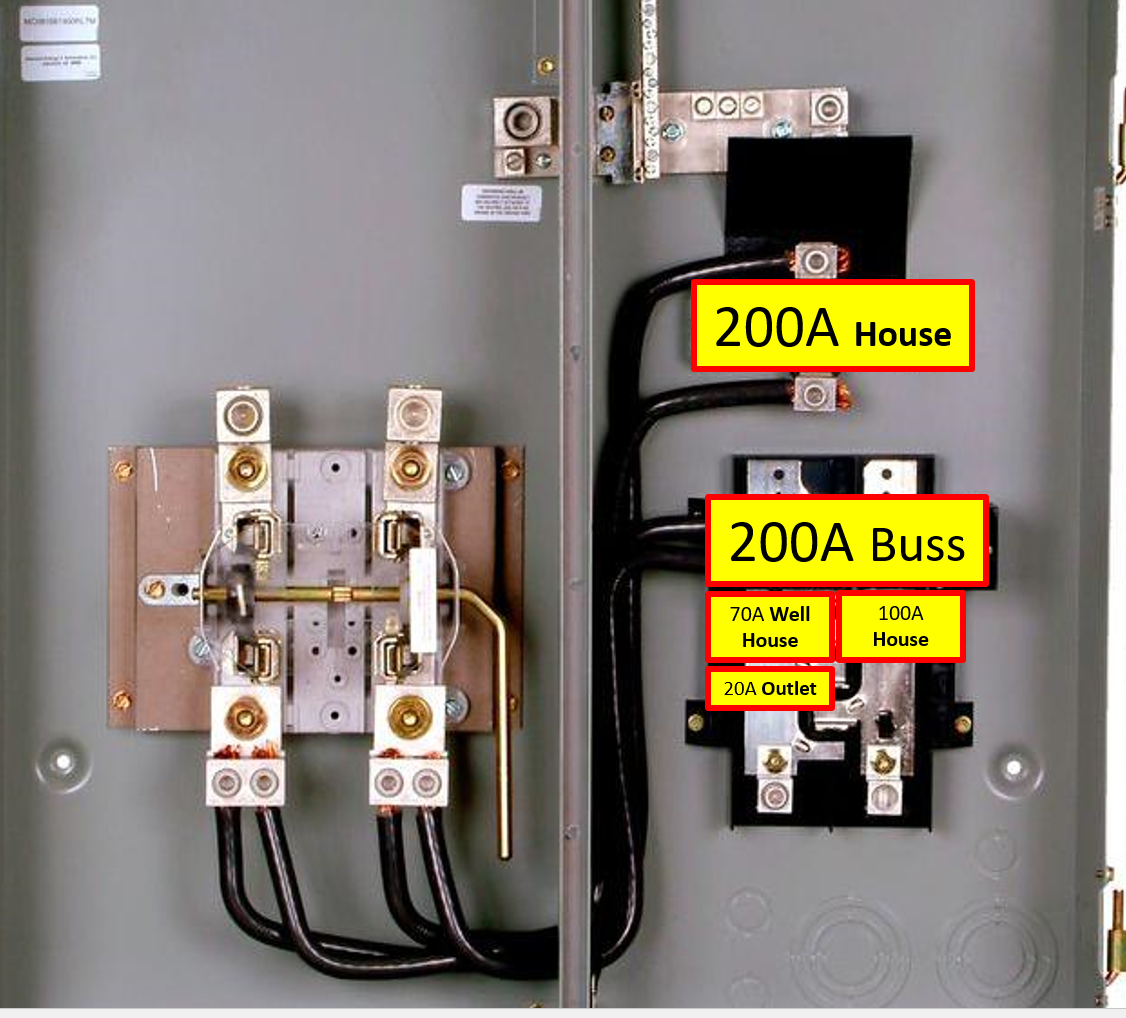 That would violate the listing of the equipment

The meter-main you are looking at (the MC0816B1400RLTM) is configured so that the factory-fitted 200A breaker is fitted into the panel interior, with its lugs connected to one of the two sets of jumper wires from the meter base to the breakers, in effect being used as a backfed main for that interior.

Changing this factory configuration would void the equipment's listing, which would cause serious AHJ heartburn in just about all cases, and calling UL/ETL/... out to your place for a field examination is generally cost prohibitive for anything that's not a piece of heavy industrial equipment. So, you can't make the changes you propose.

However, your concern is addressable in other ways

I would not call your scenario a huge concern in the grand scheme of things, though. Unless it's the well pump house itself on fire, then the FD can just as easily cut power to individual buildings with your meter-main hardware as they can to the whole lot. Having a main disconnect for the panel section makes it much easier to work on the equipment safely, as well.

The one caveat, though, is this means that the sub-feed lugs in your meter-main can only be used to subfeed a panel on the meter rack that sources feeders through breakers, not to provide a tap or feeder to a separate structure. The practical implications of this are that the house cannot have any more than a 200A feeder without restructuring the metering hardware; this is not normally an issue in configurations like this, as long as no massive current hogs such as oversized heat-pump auxiliary heaters or large electric tankless water heaters show up. (There are better solutions to the problems one would try to solve with such hardware, as well.)

The configuration that results is basically identical to your existing configuration, save for the fact that the 200A panel section is fed via its factory main breaker instead of its lugs, as depicted in your second illustration. This provides us with two means of disconnect (well within the rule-of-six), and allows for independent shutoff of any of the feeders or loads, as well as a global cutoff for everything aside from the main house.

The bad news, though, is that if the 100A breaker feeds the main house, it would violate NEC 225.30 about the number of supplies to the building. Having it feed the guest house (ADU) is fine as it would then count under either 225.30(B) point 1 or 225.30(D), but that feeder cannot feed anything in the main house as a result of feeding the ADU, at least under a strict interpretation of NEC 210.25(A).

Since you are able to get the house to run on 200A, though, that means you can go ahead with what you are describing as long as you maintain a strict electrical separation between the circuits for the main house and the circuits for the guest house. Note that grounds lighting loads cannot be fed from either the main house or the guest house under this strict interpretation of 210.25; they would have to be fed either from the pumphouse panel or directly from a breaker in the meter-main.

As to the subpanels involved, there is no reason whatsoever to skimp on them; for a house this size, I would consider a 200A, 42-space, main breaker panel a bare minimum, with 54-space or 60-space options readily on the table despite their extra cost over 42-space units. If space allows, you could even "go for broke" and do two 42-space panels (one main breaker, the other main lug) daisy-chained together with a subfeed lug block and a short stretch of feeder wiring, giving you 80 spaces for about the same price as 54 or 60 costs.

The pumphouse and guest-house/ADU panels, then, can be 30-space, 125A, main breaker panels; these are relatively inexpensive and provide plenty of room for expansion. The main breaker, by the way, simply serves as a shutoff in this case, so it can be larger than the feeder breaker in the meter-main without raising any issues.

As to those feeder wires...

While the factory wiring inside your meter-main is THW, and likely copper as well, this has no bearing on what types of wires are legal to terminate on it in the field; it simply needs to be treated as an integral part of the equipment in this case. The 20A circuit is probably best run as THHN/THWN in a short conduit (nipple?) run. However, for large feeders, the wire of choice is XHHW-2 compact stranded aluminum; it's far cheaper than copper at these large sizes, does not pose the hazards that aluminum branch-circuit wires did back in the bad old days, and is more robust to temperature excursions, water, and such than THWN is.

Of course, you need something to protect the wires as they are run underground, and for this we use conduit. In easy soil conditions, PVC can be trenched in to about 22-24" deep and will last basically forever underground. If trenching is difficult, one can use rigid metal conduit in a 12" trench; this saves a wire in the conduit, at the expense of more work, and some vulnerability to corrosion. Either way, you want to use fat conduits here. A 3" conduit to the main house would not be at all out of place, if only to leave room for a future upgrade to 400A, and I would run 2" conduits to the guest-house and pumphouse as well if I were in your shoes.

TORQUE ALL LUGS TO SPEC

One new requirement for the 2017 NEC is found in 110.14(D), and it requires that a calibrated torque tool (wrench or screwdriver) be used on all equipment that has torque values for its screws or lugs labeled on it. Even if your local authority having jurisdiction does not enforce this, it's still a very good idea so that your electrical system doesn't give you the loose lugnut.

Postscript: What if it turns out the main house does need over 200A?

In a case like this where the main house did need over 200A, we'd have to turn to a different set of hardware than what you propose in your question, especially given that you have a remotely located meter-main, which takes the typical way it's done (with 2 200A breakers in the meter-main feeding independent subpanels) off the table.

Instead, I would use a 400A meter-loadcenter with a single main breaker, and then use two subfeed lug blocks in parallel to feed a 400A disconnect for the main house. Since breaker coordination is generally not feasible without specific engineering study anyway, you don't lose much by not having a 400A OCPD dedicated to the main house feeder. This also gains you the ability to disconnect the main house without losing power to the pumphouse, or the ADU for that matter, while still having a single "kill all the power" switch available if need be.

If we are to stay with your theme of Siemens hardware, I would go with a MC2442B1400SDL for the meter-main to provide a single main disconnect as well as spaces for the subfeed lugs and the remaining feeder breakers, and a HNF365RA for the disconnect for the main house. With this, we use a KO punch to put a 2" KO in the bottom of the right side of the meter-main box and the bottom of the left side of the switch enclosure, and connect the pair of ECLK225 subfeed lugs in the main panel to the line lugs on the disconnect switch with a 2" rigid conduit nipple and 4/0 Al wires, two per pole, run lug-to-lug. The switch also gets a HG656A ground bar kit to provide a place for the feeder EGC to land, by the way, as it needs to have its bonding screw pulled if present.

Are there any issues with this setup?

The NEC allows up to six service main breakers for each service. So given your description of what you intend to do it is allowable by code but with exceptions.

The most important one is the equipment you are using must be approved as service entrance equipment, and the main design of this equipment requires it to accept no more than 6 means of disconnect.

Now this requirement can get kind of tricky and it can generate a lot of discussion, but to keep it simple. You need to address your question to your local AHJ. Even though everything I just said was per the NEC it is a continuing discussion even among inspectors as to what is allowed in a noncommercial single family dwelling unit. The problem for the DIY is whether or not this equipment can be bought off the self.

If this is a commercial building or a multiple dwelling unit for something like a apartment rentals. Then the rules are clearly defined and the electrical contractor can easily have one manufactured.