How Do I Plan for an Intrusion Detection System?

I would like to plan for an intrusion detection system in a home that is currently under construction. The home has a walkout basement that is sloping, shown in the rear elevation picture shown below.

I've included an image outlining the major alarm system components to provide a clear reference when referring to different components.

I'm planning on installing a keypad near the entry of the front door and the door coming in from the garage (#7508).

The security system itself will be installed in the basement, with 22/4 home-runs running from each window/door contact, and Cat6 from the keypads to the panel.

These are the main questions I have:

Note, that the elevation diagram is from the stock plan purchased from an architect, and the other floor plans are something I put together to show some modifications made to the stock plan/window placements. 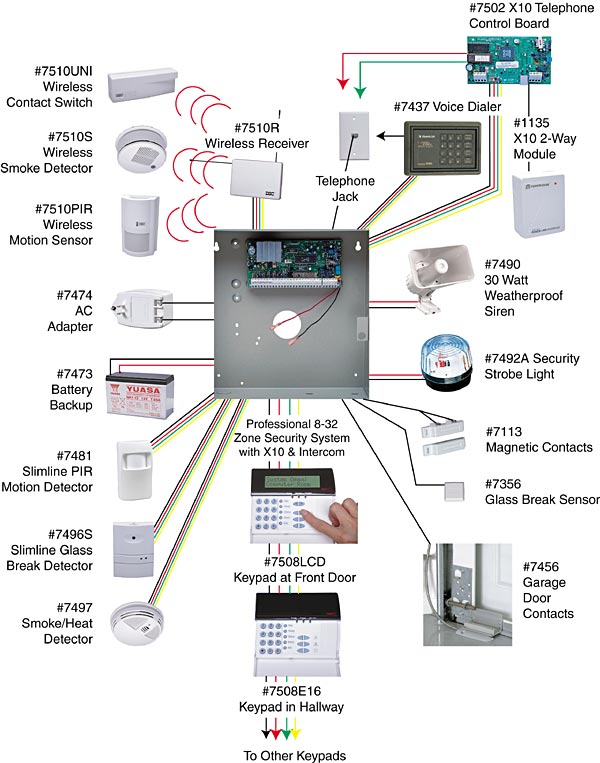 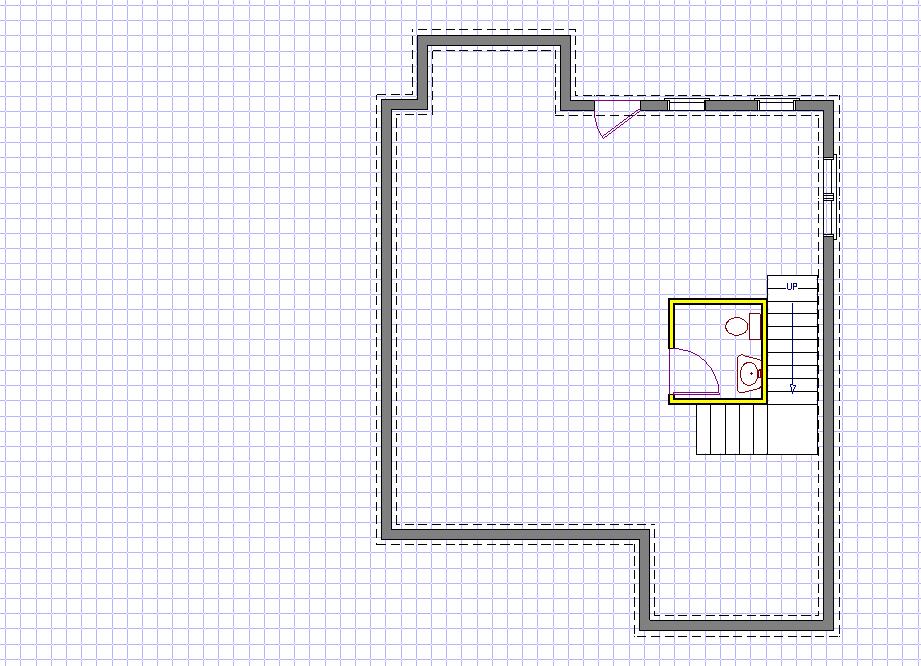 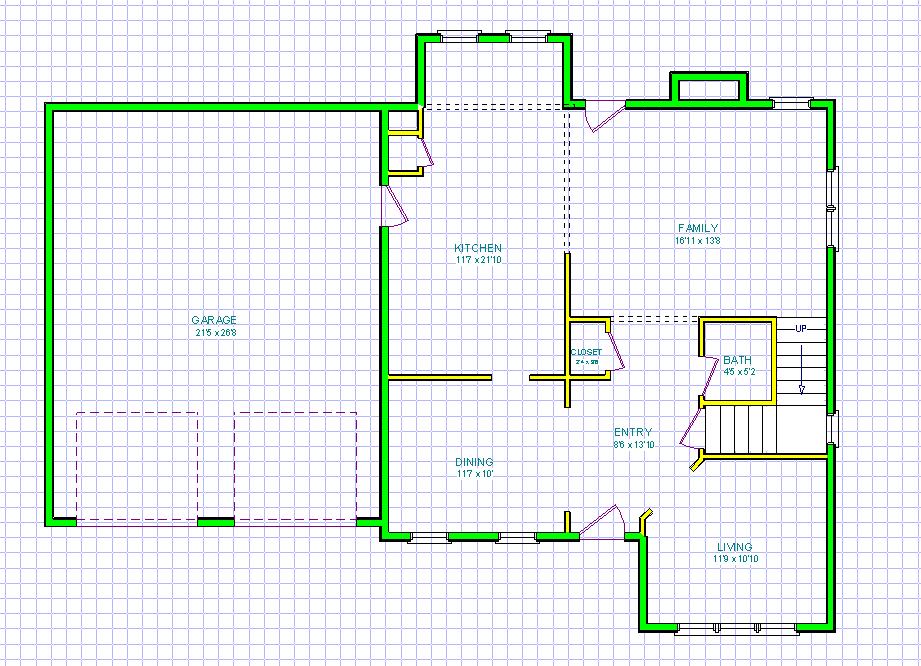 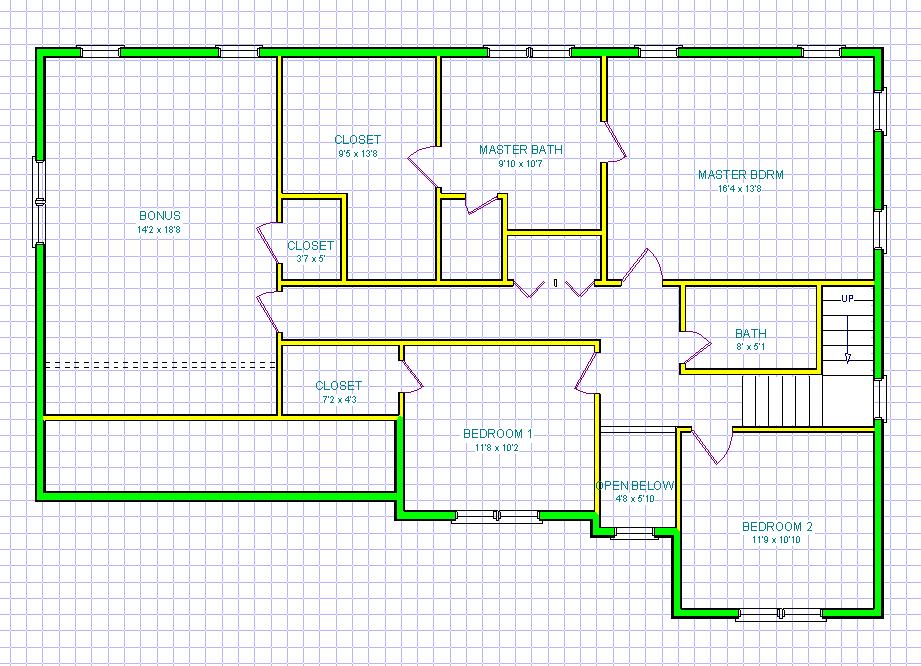 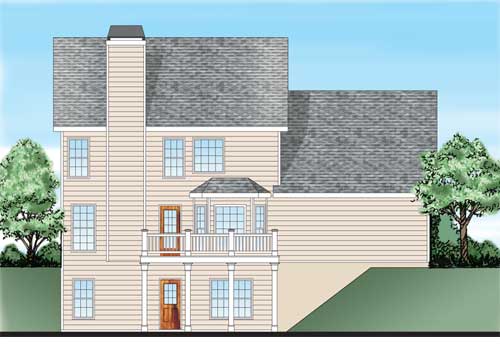 Note, I'm not anywhere near an alarm professional, however I have installed a couple systems before and have just recently been researching again as I prepare to move into a new house where I'd like to install an alarm.

You'll want a keypad anywhere you normally enter/exit the house, such as by the garage door or back door. As @bib points out, you may also want one in the master bedroom to be able to use panic, or see status of the system.

Whether contacts on the windows are worthwhile depends on what you are trying to protect.

Glass break sensors are another good way to cover likely intrusion points through windows where someone is going to smash it to get in. Patio doors and sidelights beside doors are good options. The sensor you quoted is actually an older style, most of the new ones are audio sensors that listen for the sound of breaking glass and work in anywhere from a 10 to 25' radius (depends on the glass, check specs). You can get these combined with motion sensors as well.

I would probably put motion sensors in:

Of course you can put more if you want, but you need to think of what you're trying to protect from. If someone breaks in through, eg, the dining room, they are probably going to walk around and set off a motion somewhere. If you do have enough valuables in a room that someone may break in, steal everything from that room and leave, then you may want to put motion or some other sensor in there.

The siren should go somewhere it can be heard inside and out. Typically it's just installed in the basement near the alarm panel. You may also consider installing in the attic, or outside (you can get them with flashing lights too) so it's audible/visible to neighbours.

I am also a fan of installing protection around the alarm panel. Usually there is a 30-second delay to put in your code, and that may give someone enough time to get to the panel and disable/disconnect it. If the panel is in its own room, put a door contact on that room and otherwise put a motion sensor in there. Either way that zone should be set up as instant -- even if the system is in the delay entry mode, activating either of those zones should instantly alarm the system. Normally interior zones are bypassed while in delay entry.

This is also a consideration for motion sensor placement -- you can set up the motion sensors so if you were to walk into eg, the living room without disarming first, the alarm would go off. You just have to carefully consider placement here, and ensure that you don't set this up somewhere a person would normally walk before disarming.

I am considering my own system, and one neat thing I thought of (though apparently I'm not the first) was to put a plunge sensor in the back of the deadbolt channel, so that it can detect if the deadbolt on the door is locked or not. This may not be part of the alarm, but it can at least let you check the door is locked without getting out of bed or after you're already at work (assuming you have internet connectivity on the system). Unfortunately in my house there is a sidelight integrated into the door that prevents me from doing this.

You should consider how you use the garage. There are several ways to alarm it.

If you're not trying to protect the garage, it's pretty simple, though you may still want contacts on the doors to at least let you see if they're closed or not.

If you're using a wireless system with remotes, you can arm/disarm the system with those allowing you to exit from the alarm. If not, you need to ensure you have enough time to arm the system from a keypad, and get out of and close the garage doors before the system is done its arming countdown. This may mean putting a keypad in the garage, but again it depends on your use.

You should also put in some smoke/heat detectors. They can be wired into the alarm and thus monitored as well as setting of the siren (usually it does a different noise) in case of fire.

If you're going to have a company monitor the system, you need to ensure there is connectivity. At least this means a telephone line or internet connection. For telephone lines, a special jack (RJ31X) is used that allows the alarm to disconnect and take over the line, and so you need to route the main telephone line to the alarm panel before it goes to any other jacks in the house.

However you should also consider that someone may cut the line, and in that case communications is down. You can get GSM cellular options for communication that work around this.

Ok, too many questions, but i will hack at a couple points.

Keypads are typically also installed in the master bedroom to allow setting, disarming and panic activation.

I will leave the rest of the questions for someone whose installation experience is more recent than mine of 40 years ago.

I am new to the alarm installation world, however I just completed installing mine after much extensive, intensive research- thinking like a thief & more importantly a desperate thug! I Have incorporated both wireless & wired detection with a vista21ip panel & 6160rf keypad. I recommend motion in all rooms doubled if you can afford it- also all entry points windows doors garage contact sensors followed by motions- on sliding glass door entry points contact & shock sensors. The use of gsm comm module is as they say the best, most reliable method of sending signal to the alarm monitoring co. Basically a 3 or 4g cellular mounted to your alarm panels board. I suggest having an interior alarm siren as close to the sleeping quarters as possible along with a strobe beacon mounted visible to the neighbors on the exterior, having an alarm is great confidence in safety but comes with !responsibility! & knowing/understanding operation with all capabilities of the system. Try not to false your system at all- but test it frequently. I use 3 arming modes- Away, Stay & Night Stay which I have pre-programmed selected zones to arm in Night Stay- Awesome feature. As for wiring 22awg for comm & 18-20 for carrying the power to sensors that require it (motion). All windows use wireless contact with tamper. I suggest going with Honeywell Products & the "Total Connect" system.

Not the answer you're looking for? Browse other questions tagged electrical wiring security data-wiring or ask your own question.

5
How should I wire for a security system during construction?

4
How is pre-wiring done for motion sensors / alarm system in new construction?
5
How should I wire for a security system during construction?
1
Running 6/2 cable to garage for NEMA 6-50 outlet
0
How can I use a 15A momentary switch (switches) to replace my multi-button wall-mount garage door opener?
3
Wire for 100 AMP Detached Garage Subpanel. 50 feet direct buried 50 feet in crawl space
0
How do I porperly identify which sensor wires are which for my pre-wired garage door openers?
4
What does "Ampacity Dwelling" mean?
2
Electrical plan review - detached garage subpanel
3
60A Subpanel with feeder wire spanning a finished section of the basement