Does it matter which wire goes where on single pole dimmer?

I’m updating the switches throughout my house. I have an old rotary style single-pole dimmer controlling the just-as-old chandelier in my dining room. This dimmer shares a double-gang box with a 3-way switch that controls half-hot receptacles in a connecting room. (For context: both switches are on the same circuit but unrelated, as the 3-way switch is the dead end of the 3-way.)

So...back to the dimmer wires. There are two black wire pigtails pre-attached and coming out of the back of the old dimmer. There are no screw terminals. Each black wire is attached to a separate single black wire coming out of the box. The new dimmer I’m replacing it with is a rocker switch with a small slider next to it. The new dimmer can be used in a single-pole/1-way or a 3-way application. (More specifically, Legrand Radiant RHCL453PTC.)

The old rotary dimmer is a no-name brand from 1986 (even though this house was built in ‘96), so any identifyable markings are nonexistent. I know for an ordinary single pole single throw switch, wire placement is typically interchangeable (with the exception to the grounding conductor, obviously). Is this the same for a dimmer switch? How about if the dimmer switch can be used in both a single pole and 3-way application, separately?

Unless the new dimmer is specifically marked with LINE and LOAD or similar, it doesn't matter which wire goes to which screw/pigtail in a simple two wire switch or dimmer. Since your new switch can be used as a three way, the instructions should say which screw should not be used.

Edit based on comments:

Here is a diagram that I believe is for your dimmer: 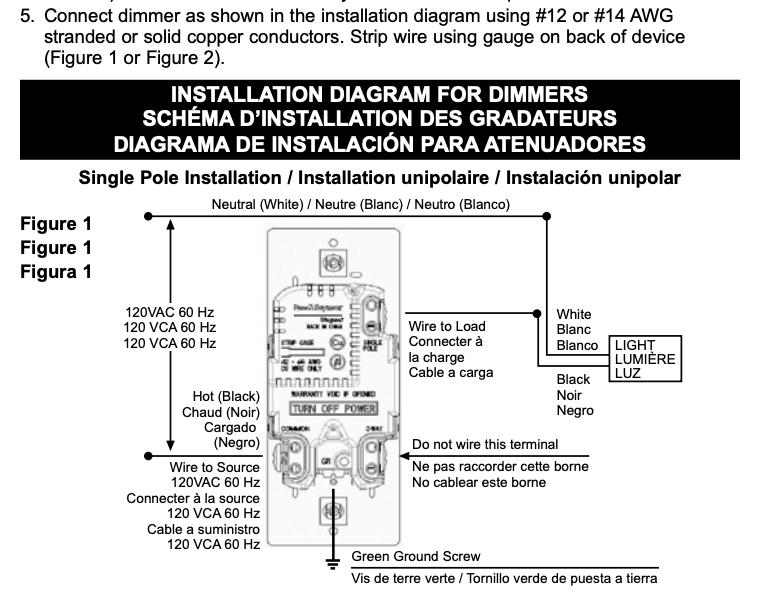 They do specifically call out a screw for Line and a screw for "single pole" operation. Now, the dimmer might work regardless of how you hook up the two black wires, but, they warn than the dimmer needs to be wired this way, so we really should listen to them.

With the old dimmer removed you can separate the two black wires in the box and make sure they are not touching anything then turn the power back on. Using a voltmeter you can check the voltage between the two exposed black wires and ground or neutral. The LINE wire will be the one with voltage (~120v). The wire going to the lamp will be dead. DO NOT touch any wire until the power is turned back off, or call an electrician if you are not comfortable making this measurement.

Based on the diagram, the wire that had voltage goes to the "common" screw and the wire to the lamp (that had no voltage) goes to the "single pole" screw.