Can you ID this shower system/panel product?

We bought a new house that we're slowly learning was the victim of a rather cheap remodeling job. So, I'm slowly patching thing up.

One task is our shower enclosure. It's made up of some sort of panel system, with a matching shower base. It's the same material that the bathroom vanity top is made out of. I'm guessing it's something like Corian, though likely a lot cheaper of a product. Can anyone ID what this is?

The issue is that the corners of the shower walls had these inside corner trim pieces that had most of the caulking failing. I wanted to remove them, clean off the caulk, and re-caulk. Unfortunately, while one came off, the other came off in pieces as this material isn't terribly strong. It appears to be some sort of fibrous plastic material.

The problem is I have no idea what the product is, so don't know where to even begin looking for a replacement trim piece.

Bonus points if anyone can tell me more about the actual wall panels. Most stand-up shower systems I've seen have redundant joint overlaps to keep water from getting behind them. I'm pretty sure the shower pan has that, but can't tell on the wall panels themselves. 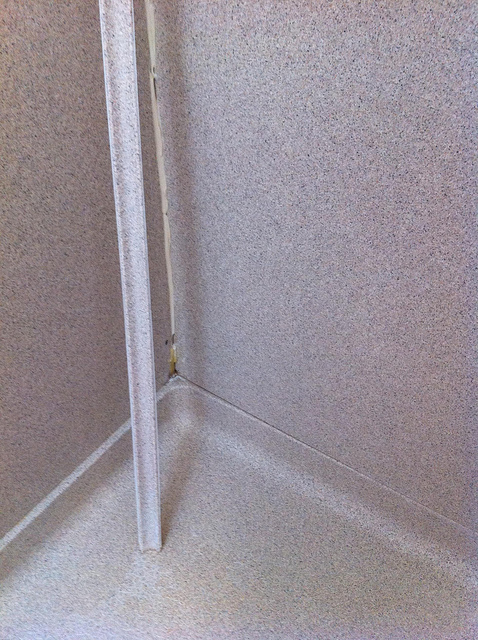 Close up of surface pattern: 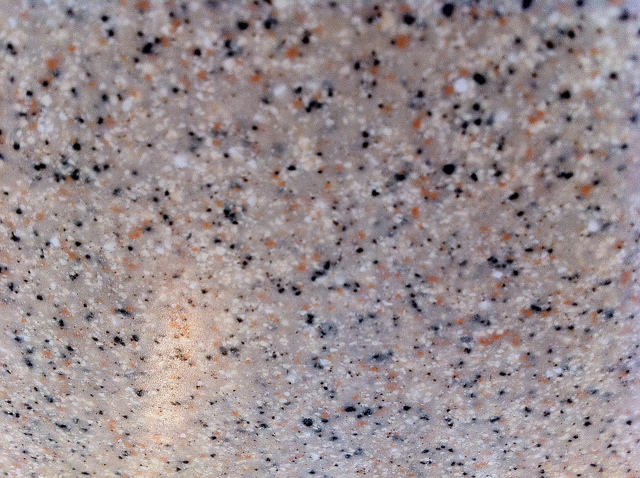 How I found it: I got lucky. I just grabbed it and started taking it to local big-box places (I assumed it was a big-box as the materials in this house aren't necessarily 'high end').

I stopped at Lowes and the initial guy in the kitchen section had no clue, but I was fortunate that a curious co-worker popped his head over the counter, thought for a minute, then declared it 'Bermuda Sand' from 'Swanstone'. We found the swatches and, sure enough, he was right-on. So kudos tot he very helpful Lowes employee.

Apparently, these type of shower systems are just large panels of solid surface material that is glued up on the wall. They idea is that the panels abut, then caulked. The corner cove is more of an 'extra' piece that can be used if desired. The underlayment SHOULD be your standard tile surface...water proof cement board that is then sealed with some sort of water sealant. However, I don't know that in this case, so this particular piece seems to be a rather critical for my shower. So, glad we were able to find it.

The challenge for future people reading this is that I guess the solid surface companies are many, and the patterns all tend to be unique to each company, so it is a bit of a needle-in-a-haystack hunt trying to find these.

For contractors, I'd like to suggest leaving a note on the inside of a bath or kitchen vanity with the manufacturer's info. That'd be handy. ;)

5
How can I correct the slope of a marble shower sill?
6
What is the proper preparation to re-apply silicone caulk?
2
How can I fix my leaking shower?
2
Shower Frame is leaking (at the corner)
1
How long does caulk need to dry in a 1" gap?
1
How can I get this elbow off my shower drain, or do I need to replace the entire assembly?
0
How can I bring more light into this shower?
0
What kind of material is this (for a shower pan) and how to remove it