Why does my shower's water temperature fluctuate several times per minute?

The check valve was for the circulating pump. They had to leave the old one on. They said it was stuck in an open position. There's little tank connected in case something goes wrong--the tank takes some of the overflow. It is connected to the water heater pipes.

When we take a shower the water fluctuates between mildly cool and a little warmer about every six to eight seconds. This is for the entire time we shower. It is not like when you flush a toliet. It did not do this before the new heaters were put in.

They did put a little tank on top to the side of the new heaters. We have had them out three times and they can not fix this. Do you know what is causing this? Help.

The small tank is a thermal expansion tank, there should be two of them. You must have a check valve if you have expansion tanks. If you have two matching water heaters, they should have been plumbed in parallel and not in series. Also, the piping associated with each heater needs to be the same length or it will cause one heater to do more work than the other. This could possibly cause a fluctuation in the water temperature. Also, make sure that both heaters are set to the same output temperature. Everything must be "balanced" in a parallel setup. Here is a diagram of what two water heaters in parallel should look like: 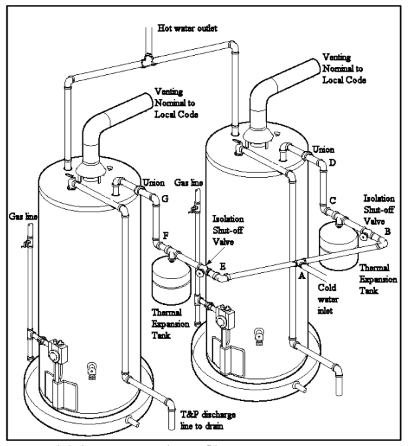 Here is a diagram of two heaters connected in series: 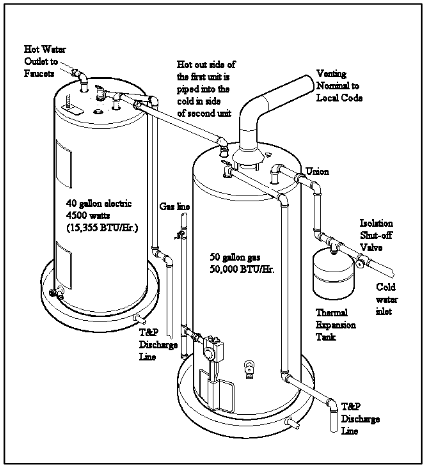 Images are from a Rheem/Ruud technical service department pdf I have on file.

6
How does one know if a well pump is “Short Cycling” or pressure tank is water logged?
3
Why won't my toilet's water valve not turn off?
5
Why does cold water always mix in bathtub mixing valve, even on hottest setting?
0
Should there be any moisture around a shower valve?
0
Air trapped behind check valve?
2
Replacing a well pressure tank
1
Inconsistent hot water
0
Toilet constantly draining