Water coming up from under stone tiles

I have water seeping up from stone tile in a first floor mud room. I checked in the basement ceiling below these tiles and there does not appear to be any wetness and the water also isn’t coming from the ceiling. I suspect what’s happening is water is getting behind our wood shingles through an old roof line (this is an addition to our house) and finding its way through a crack right about where these tiles are. Who would I call for something like this?

One other theory I have is that it could be related to a gutter splashblock (there is a gutter downspout right behind this wall) which blew away during a recent wind storm and was only recently replaced (two days ago). That said we have amazingly good drainage here and don’t have any water problems with our basement. I’d be quite surprised if this were it. The foundation appears to be completely dry here. 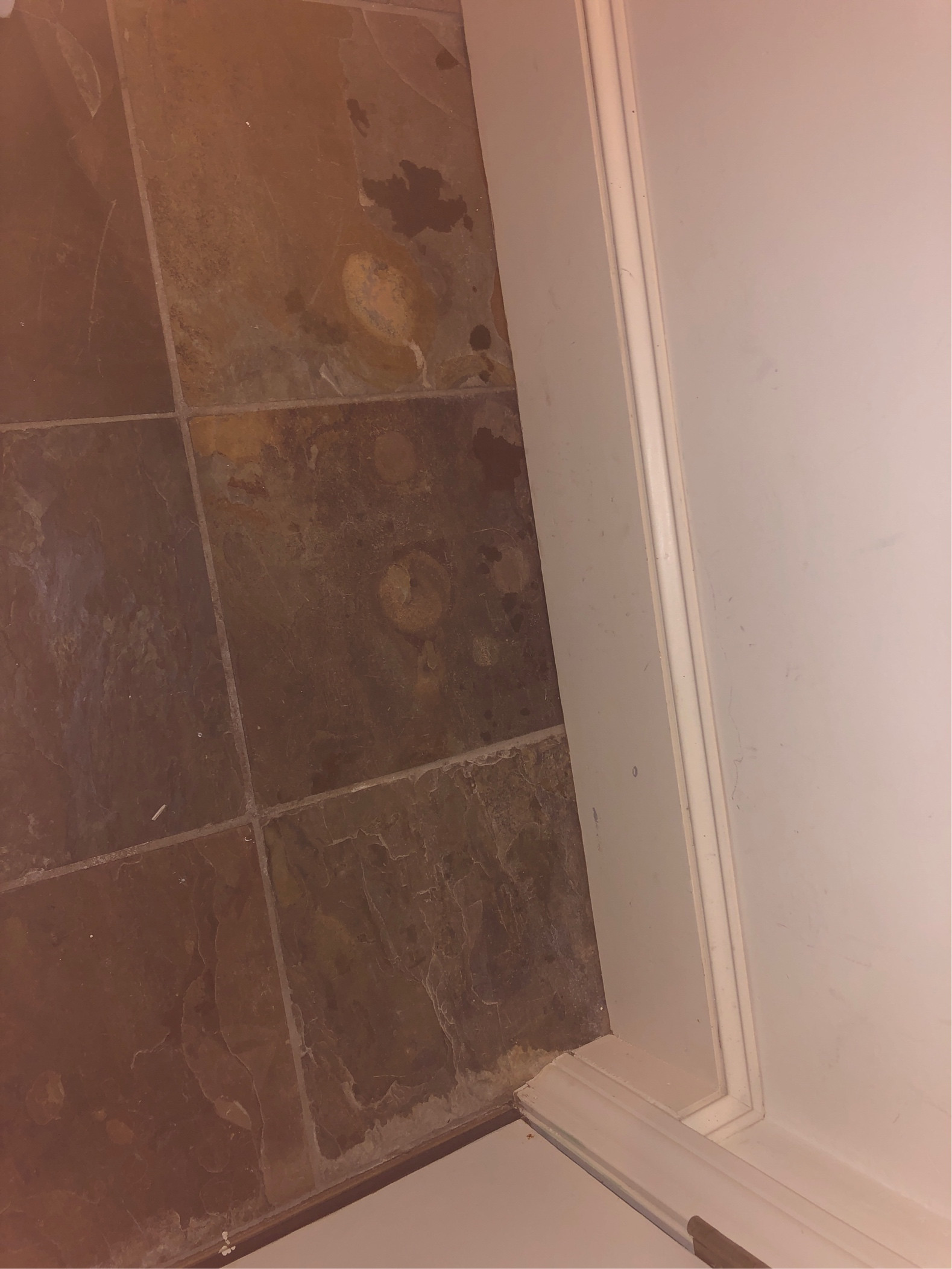 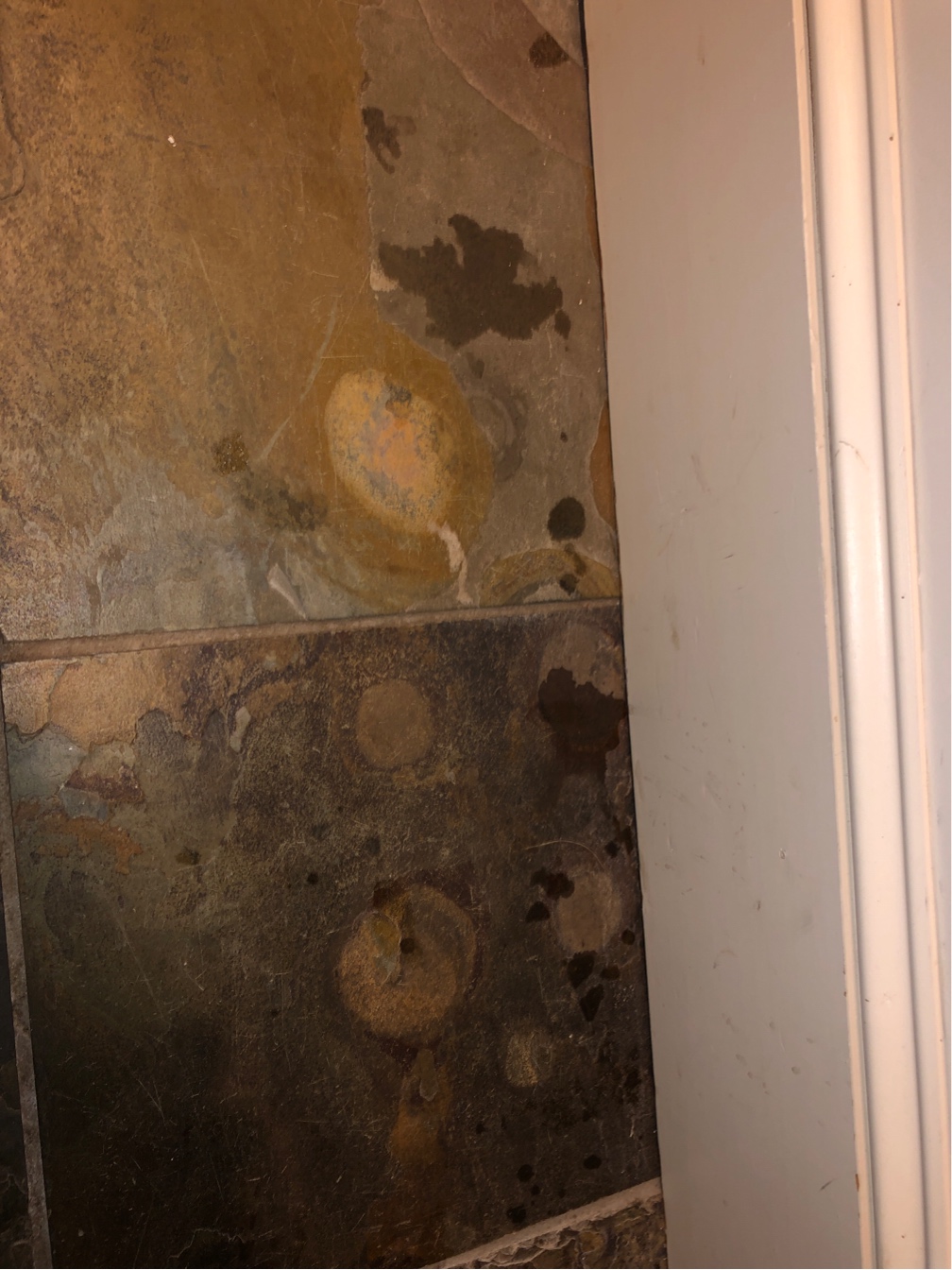 Is this adjacent to a restroom , laundry room , is there a restroom above, the wall adjacent to the tiles , is it a wet wall ( is called like that when all pipes are running on a wall) if it is a wet wall maybe a pipe could be leaking, you will say how ( pipes touching other metals inside the wall they rub against each other and make a hole small one it happened to me, to much explanation . See the plans of the house if you have them. Also the water could be sipping from outside? check that too.

If you suspect it's a roof problem, then I'd call a roofer.

If (as you mentioned in a comment) there are pipes behind the wall, I'd check that as well. Shut off all the fixtures in your house at the valves (e.g., the vales under your kitchen and bathroom sinks), don't use any water for a few hours and see if your water meter moves at all. If it does, the problem is probably the pipes inside the wall. Keep in mind that if you have a drain pipe inside the wall, that could also be the source of the leak, although your water meter wouldn't be affected if that were leaking.

If it's pipes, then obviously, you'd call a plumber, and possibly someone else to repair the wall after it is cut up to fix the pipes.

You could also get a sense of whether the issue is the roof or the pipes by seeing if you continue to see water on the floor if it has not rained/snowed outside for a long time (and after any snow that might have collected on your roof has melted). No precipitation and continued leaking would suggest the problem is the pipes.

Not the answer you're looking for? Browse other questions tagged water wood walls or ask your own question.

2
Mysterious sound coming from basement, related to water pipes
1
What can I do about water runoff that is damaging soil around my house?
1
How To Identify/Fix Source Of External Water
1
Wood between slab allowing ground water seepage
0
What is causing these water "trails" on inside of exterior wall?
0
What is this construction material under my drywall?
0
Water Main coming into house - is just super cold and keeps the basement cold
2
Keeping water away from house
0
How can I keep water out of this window?