Renovating bath and bought new kingston brass faucet with hand-held shower. Room is almost finished and looks better than expected so I decided to purchase the add-on shower riser with diverter so that I could have a fixed overhead shower and still be able to use the hand-held. When I bought the faucet, I didn't think it was worth the extra $350+ for the riser. I still think it's a bit much.

Both the riser and faucet are kingston brass and the riser is advertised as an "add-on". From the pictures you can see that there is a problem with the angle of the faucet connection. (The tub is in the hall waiting to be refinished. I just temp installed the faucet but everything was tight). 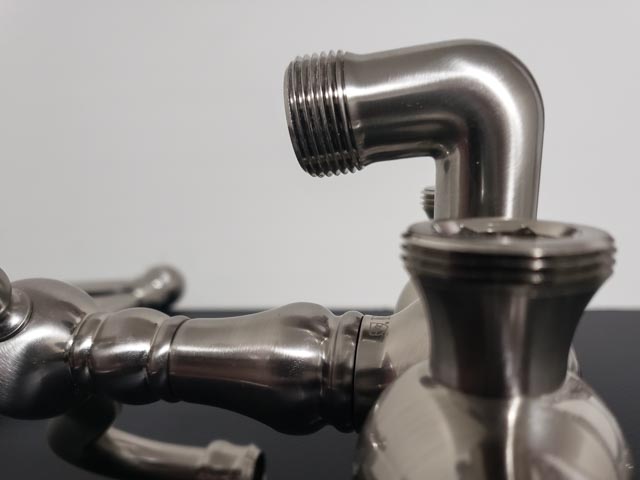 The online seller referred me to kingston. I spoke with them twice on the phone and once in email. They are worthless. I even asked if they could give me the model number of a faucet like mine with a 90 degree riser hookup. The guy told me I would have to look through their online catalog and see if I could find one.

Apparently, I'm on my own and maybe you can help.

So far, the only work-a-round I can think of is a piece of pex with fittings that will screw on to the faucet and riser. When the riser is screwed directly on to the faucet, it is very secure and rigid. There is a wall brace halfway to the top to add support. If I used the pex then I would have to add at least one more support down low to compensate for the flexibility. That's not a problem but a new bathroom with a refinished tub and $1000+ just in tub hardware is going to look REALLY bad with the pex addition.

Anyone have any ideas?

Plumbing parts, even when "proprietary" tend to stick to some standards. One of those is angles. "Everything" is available in 90 degree (right angle) and plenty in 45 degree. There is less available at other angles - e.g., 30 (1/3 of 90), 22.5 (1/4 of 90). From the looks of things, I suspect you have a 22.5 degree angle. Depending on what you can find, you might be able to get a 22.5 degree angle coupling with the right threads to connect to your existing connectors - that would be ideal. If not, then I would cut the riser near the base and sweat on a 22.5 degree coupling. The riser would be a couple of inches (you decide how much by deciding where to put in the coupling) out from the wall, but not too far and it would be straight.

In addition to the angle, you will need to know the diameter of the riser to get the right fitting. If you can't find what you want online, try a local plumbing or HVAC supply house. I don't think you'll find it in a big box store - too unusual an item for them to stock.

You can heat riser with torch and bend to straight

Not the answer you're looking for? Browse other questions tagged plumbing shower faucet bathtub or ask your own question.

6
How to connect a faucet to a buried water line?
0
Can I prevent my tub faucet from leaking by diverting the water to the shower, and shutting off the shower head?
3
Why is the hot water in my tub fluctuating between hot, warm and cold?
0
Tub faucet handle will not come off
1
Tub to shower conversion plumbing questions
0
Why does my re-plumbed shower come on whenever the tub faucet is opened?