Is there a standard symbol for an inlet on building electrical plans?

Generally, most regions have a semi-standard or standard set of symbols that is used to denote electrical wiring devices, such as switches and receptacles, on building electrical plans/blueprints. A representative subset of symbols used in North America is shown below, for those who are not familiar with the symbology used here. 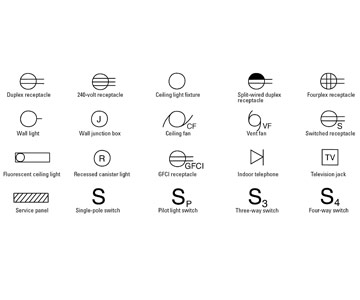 However, none of the sources I have been able to find in my (admittedly limited) research have depicted a symbol for an electrical inlet, such as the ones used when houses are fitted so that a portable generator can provide standby power through some sort of transfer means.

Is there such a symbol, either in a standard somewhere or as a de facto convention? Or, am I left with simply using a symbol for a specialized receptacle (not shown above, but there are de facto quasi-standard symbols for such out there) and then using a note to denote that it is an inlet of a certain type?

I did a quick review of my symbols library including an international crossover reference and really didn't find any real de facto symbol. I suppose someone could have come up with one and included it in a legend somewhere but it certainly would not be a standard ANSI symbol. I guess you're stuck with using a specialized receptacle and identifying it as an inlet. Usually these things are identified on a riser diagram and try to show some sort of schematic description of what it really is.

I asked the person in our estimating group that frequently completes blueprint takeoffs if they had knowledge, the response was one architect uses the single receptacle symbol with notations “WP” and “INLET”. He also said he doesn’t think there is one, and the problem he encounters with the symbol mentioned is that no intended amperage is specified.

Not the answer you're looking for? Browse other questions tagged electrical planning or ask your own question.

4
Where can I find garage building plans?
5
Where can I find plans for building a chicken coop?
5
What are the standard sizes/clearances for bathroom elements?
8
Are generator interlock kits permitted in residential applications?
2
What is the plumbing diagram symbol for a water hammer arrestor?
1
Review of my electrical plans
3
Standard electrical wall mounting box specifications for the USA
3
What pages should be included in a complete set of plans for residential construction?
0
Electrical Bonding for an exterior building