Ask Question
Asked 11 months ago
Active 11 months ago
Viewed 103 times
0
Closed. This question is opinion-based. It is not currently accepting answers.

Im finishing my basement and I don't trust little drywall screws to hold a big and heavy sheet of drywall on the ceiling. Even when professionally installed and it's said to be conpletey safe statistically. So that said, since I dont want a suspended ceiling tile system I was wondering if I could simply cut my drywalls into small and light tiles and put them up.

It will require a lot more work to fill the gaps etc but can this work? Don't try to convince me a bigger sheet professionally installed is safe - this is just for my own sanity :)

My thinking is: if one of those sheets come down it wont pull the rest of it down with it

All you accomplish by hanging small pieces and then taping all those joints is to add more fasteners and more lumps in your ceiling. The taped joints effectively make it all a single sheet, just as it would be if you hung larger sheets.

Do a little math and you'll realize that each fastener already only holds up a small bit of drywall, on average. Adding joints actually makes it all less stable.

Deal with your irrational fear and do it the right way. Add more fasteners if it lets you sleep at night, but I can't imagine that this is the only thing preventing that.

You will have a whole lot of pain doing this. Those tapered edges on sheets make getting a decent surface a lot easier. Since screws at the edge of drywall share a joist, they are closer to the edge. You are more likely to have a chunk fall, although it would be a smaller chunk.

Consider hiring pros to do it, and for your peace of mine, you work ahead of them putting a bead of adhesive on each joist.

FWIW if you are in an attic, and step between rafters, you punch a foot sized hole. I've not heard of anyone bringing down a sheet.

The worst case I've heard of was a leak in an attic pipe that collected water on the vapour barrier, separated about a 4 foot chunk of drywall, then the sheet broke, and came down along with about 50 gallons of water.

Consider other types of ceiling:

What about using the tiles of a suspended ceiling directly onto the joists? Hold each one with two dots of construction adhesive per joist. Whip up a zillion feet of ornamental batting for the edges.

You could also use OSB. It's not as heavy, and holds a screw a lot better. Fire code would likely require a fire retardant paint in a house. I've seen people use OSB in shops, both walls and ceilings to reduce the number of dings in walls, and allow the use of hanging hooks nearly anywhere.

Your best bet is going to be to install sheetrock in full size sheets using lightweight drywall. Once the install is normally done, you can install wooden furring strips on top of the drywall: 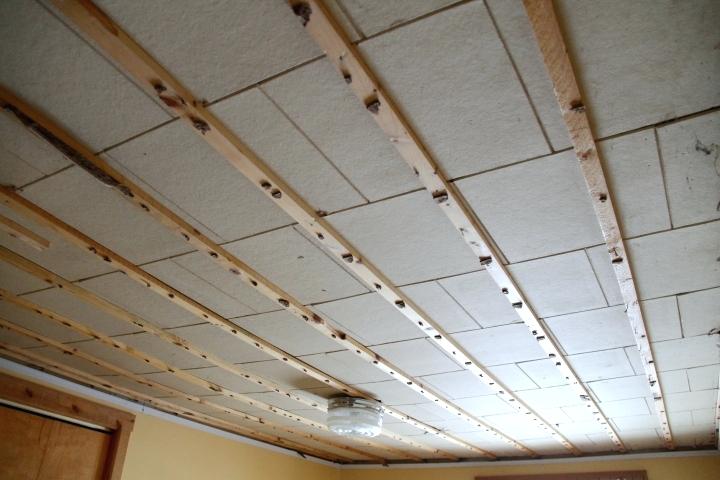 Normally wooden furring strips would be to provide nailers for ceiling tile or drywall, but in this case it will be using the strength of wood and long wood screws to provide extra holding power to lock the drywall in place. It's pretty standard to install the strips perpendicular to the ceiling joists and in your case, perpendicular to the long length of the drywall. This way, failure of any one strip would have the smallest effect.

The strips could be painted a contrasting color to give an "exposed beam" look, or can be painted the same color as the drywall to get it to blend in.

Is this a serious question? If you cut a 50lb 4x8 sheet into 32 1x1 squares it's still 50 lbs. 6 of one half dozen of the other. Are you worried that the ceiling is going to fall? Just add more screws if you want. Don't cut it to make it lighter. If you have an unreasonable issue with drywall overhead (it seems you do, you clearly stated that in your question) try a lightweight ceiling finishing. There are these staple up tiles that are so light that even if somehow they all fell on your newborn baby, the baby would be fine. You could even use wall paneling, that stuff from the 70s, and put it on the ceiling. Just paint it white.

Not the answer you're looking for? Browse other questions tagged drywall basement ceiling finish or ask your own question.

4
How do I cover large gaps in drywall?
8
How can I seal the gap around a bathroom exhaust fan?
19
What is the best way to cut receptacle holes when hanging drywall?
1
What could cause a crack in the drywall where the wall meets the ceiling?
2
Attaching Suspended Ceiling Angle to Drywall Only?
1
Drywall taping/floating steps if finish will be skim coating
0
Drywall falling from ceiling
1
Likelihood of asbestos under newer ceiling texture?
6
What is the best process for a first-timer doing a small drywall finishing job?