I will be installing a Tesla wall charger in the garage and have a few questions about the codes and such. It will have a 100 amp breaker and it will be pulling 80 amps for 2-6 hours at a time so with that in mind I am rating my wire as "constant load".

I will be installing it about 2ft from the breaker box and will run the wires partly in the wall and partly in front of the Sheetrock. Now I believe the codes call for all wiring to be in some sort of conduit when inside the wall. Can I just use that blue plastic stuff for that portion? And for the run outside the wall what is the rules for that?

Also because it would be a million times easier is there a way to go through the stud? I mean I guess I could pull off the sheetrock cut a hole and replace it. Bear in mind it's a garage and the walls are unpainted or anything just plain siding. Also if it was to stay in the wall I could easily pull it through the back of the charger just like an outlet box.

The image is a rough sketch of what I'm planning on doing. 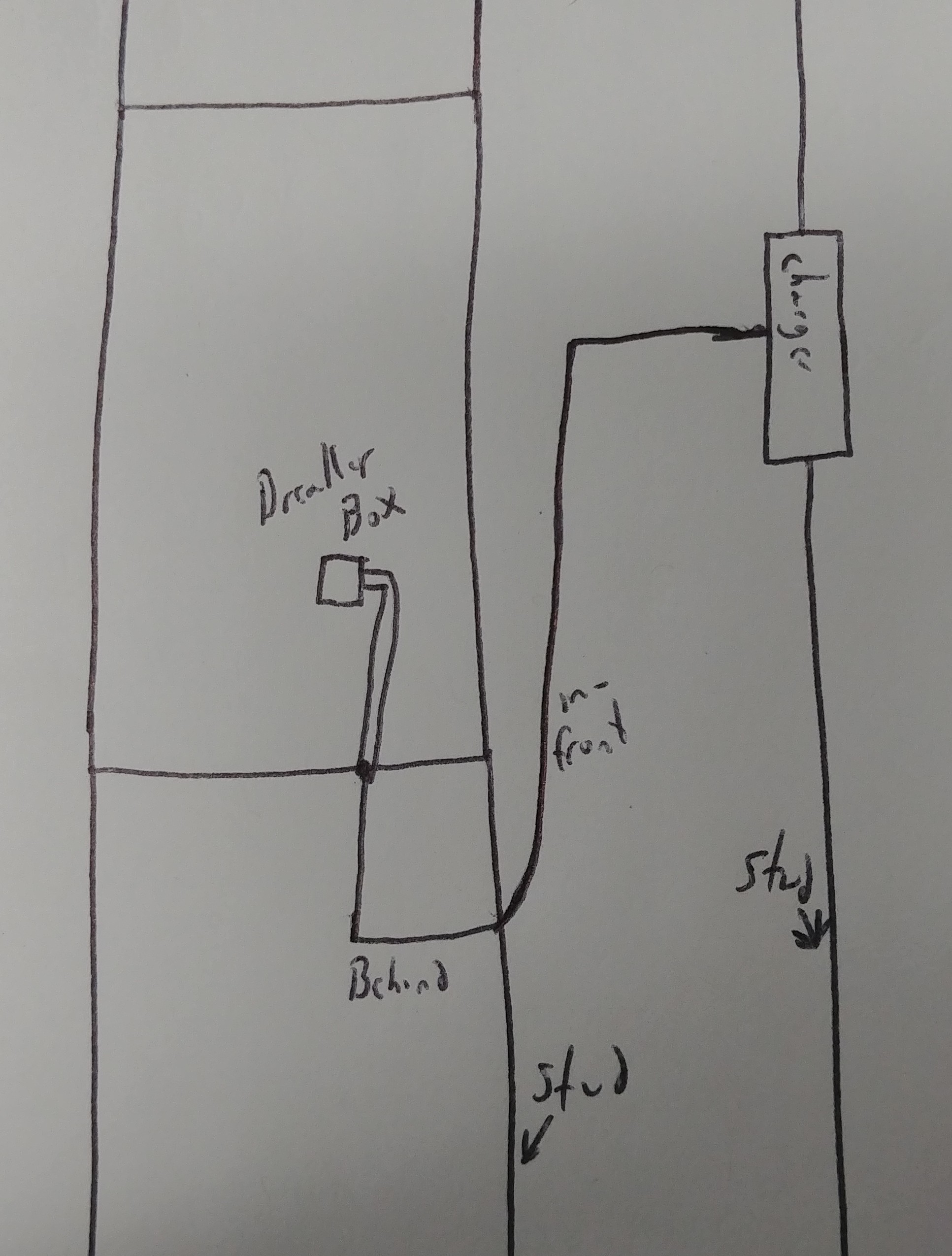 With a normal cable, you'd use the same rules as NM

The normal cable for this job would be a type SER (Service Entrance, Reinforced) cable. While a typical SER cable for a 100A circuit would use 1AWG aluminum wires with a 3AWG aluminum ground, the Tesla charger is incompatible with aluminum wire, so you'll need to use a copper SER cable with 3AWG wires and a 5AWG ground instead. Anyway, because this is a SE cable, we look to NEC 338.10(B)(4) for the rules:

(a) Interior Installations. In addition to the provisions of this article, Type SE service-entrance cable used for interior wiring shall comply with the installation requirements of Part II of Article 334, excluding 334.80.

As a result, we follow the same rules as NM cable when installing this stuff, including the use of nail plates to protect it when it runs through notches or holes in studs, unless those holes are more than 1.25" from the edge of the stud, as per NEC 300.4.

Not sure with high amp circuits. Normal 15 and 20A circuits need to be protected from a nail skewering the wire where it passes through a hole in a stud. OR they must be some minimum distance from the edge of the stud. You can protect by conduit, or by putting a metal plate over that part of the stud. This allows a 1/2" hole in the stud with clearance on either side.

You may want to run separate wires for this reason. It will also be easier to bend around corners. This also prevents a stray nail from shorting two conductors, and spreads the I2R heating from being as concentrated. Given that in a garage, larger nails are likely to be pounded into a wall, there is a case for paranoia. Really don't want a 120v nail head in the room.

Surface wire has to be safe from casual damage, up to a certain height above the floor surface. (Door height? May vary by jurisdiction) You can use cladded wire or conduit.

In principle this allows you to fasten wire casually to the ceiling run down part of the wall, then run the rest of the way down in conduit. Looks like hell. But you know where your wires are.

Check your local codes. I'm in Canada so our codes will differ, and I'm not current on code even here.

My suspicion is that we are going to see a raft of code revisions over chargers. Few other things use so much power for extended periods of time. Could make a case for de-rating the conductors, and requiring the next size up.

I would talk to your electrical building inspector and ask what he would pass.

Not the answer you're looking for? Browse other questions tagged electrical wiring installation or ask your own question.

4
How can I run wiring around an inside corner?
3
What is the preferred method for removing & replacing electrical wiring in the garage?
0
Is Insulated Ground Wire Required?
1
Does a 100A outlet for a car charger need a dedicated disconnect?
2
Can I wire a 120v 20A outlet with #8 wire
2
Need some advice on re-wiring kitchen, one empty breaker left
3
Separate panel for house in garage - how much capacity do I reasonably have left?
0
What type wire to use for 240V, 30amp, 6-30R, with 60' run?