Before digging in I'd like to turn the power off to the area - I've flipped every single breaker (in a poorly labeled box) but one and the power never went out to the room. The only one I didn't flip I couldn't flip - it seems stuck which I imagine could be a problem. Should I have it replaced or should I just try harder? Is it something I could DIY - is turning off the main breaker in the breaker box enough to replace a sub-breaker, or do I need an external disconnect?

There isn't much rhyme or reason to this box, poorly labelled with breakers turned on that aren't wired to anything as far as I can tell and have now been off for a week with no noticeable effect. The only breaker that was off I tried turning back on and it triggered the main breaker for the whole box - I assume that's horrible and dangerous and that there's got to be a short in the box itself?

In the attached image, the breaker that's on is the one that seems stuck, and the one that's off is what triggers the big breaker at the top of the panel (not pictured.) For reference, I believe we have 100A service. 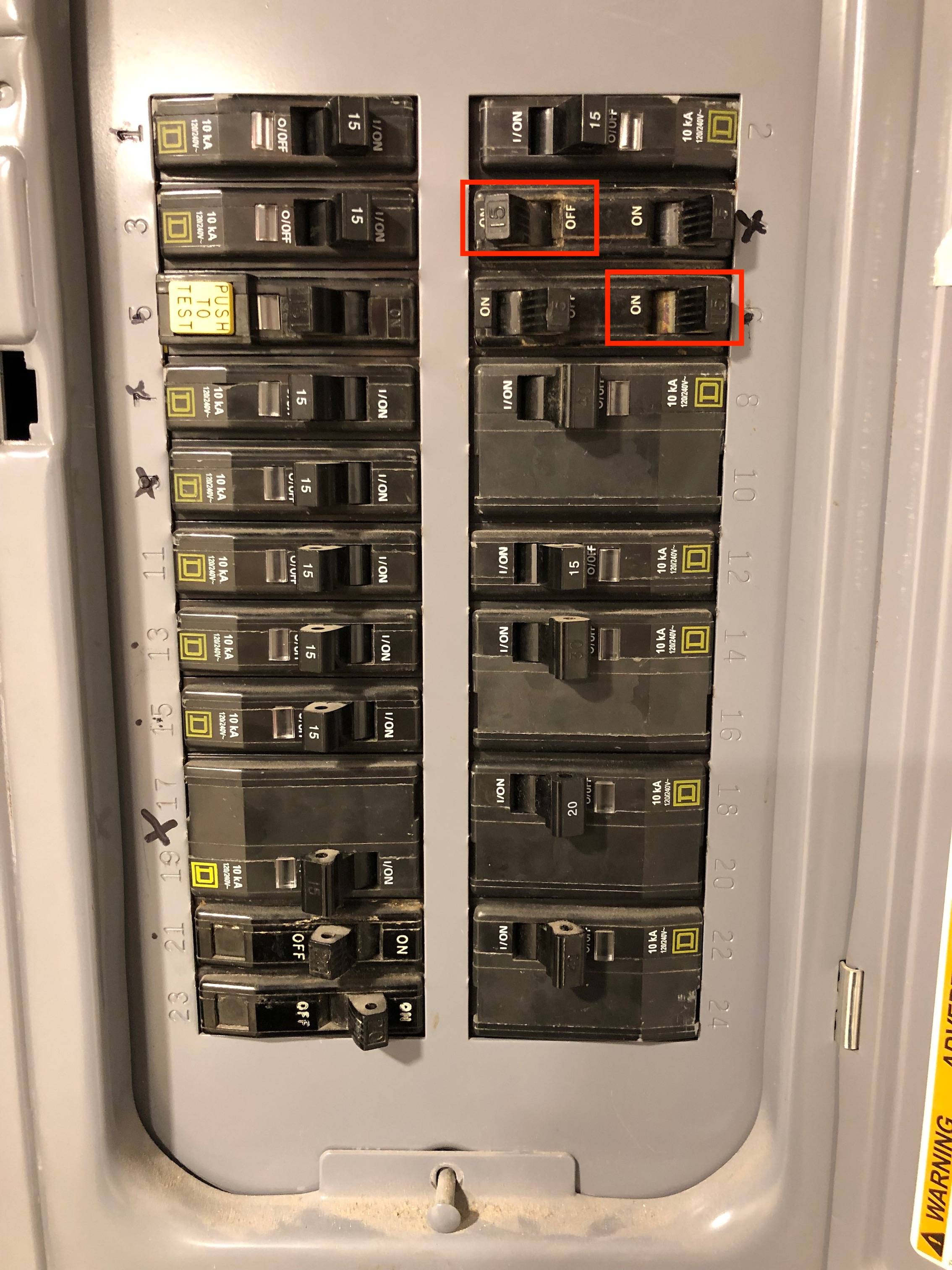 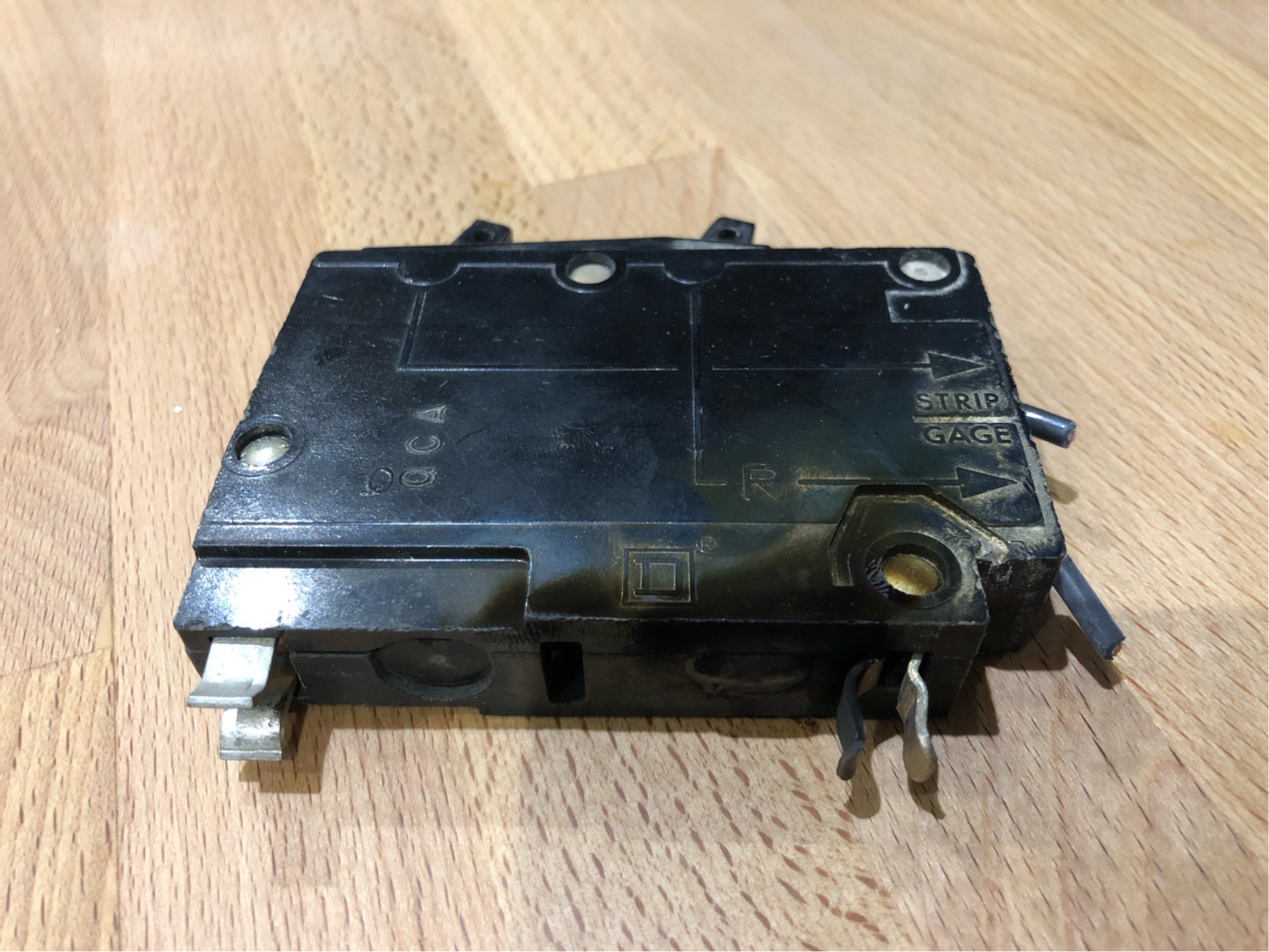 The burn may be from the breaker in the slot beneath this one, the breaker that tripped the main breaker. The one pictured here was the one I thought was stuck, turns out it wasn't, but I put a new one in anyway.

Referring to the panel with breakers 4L and 6R in red: Turns out the wires from the same cable were wired to two breakers - a black wire to 4R and a red wire to 6R (6L has no wire.) It seems to me that kind of setup requires a two pole breaker with the black and red each being on one pole?

Right now the red wire is still connected to 6R that remains off (and labeled "DANGER".) 4R is actually powering a small circuit with two lights and one outlet.

I was up to my elbows in the breaker panel today - there was a whole wad of disconnected wires, some with a pair (white) still connected to the panel neutral.

QO's are quality breakers, so your "off breaker" is probably a tripped breaker because the circuit it's feeding has a big short. When you reset it, the short was strong enough to also trip the main breaker. (i.e. trip the main first). That sometimes happens. The repair here is to hunt down and fix the short. It's either amateurish or failed wiring at a junction box, or a nail driven through the Romex.

Your breaker that won't turn off is a very serious problem and that breaker should be pulled immediately. It is an old-school "double-stuff" breaker. The new style QO "double-stuffs" look different, the switches are abreast of each other. That is fine.

8
Can I install an additional breaker bus bar on my main breaker panel?
4
Using a 30-amp tandem circuit breaker for a 120/240v circuit?
0
Do I need to add a circuit breaker to the outdoor panel that powers my RV?
1
Can't Find Main Panel Breaker
2
100 A GFCI breaker feeding a sub panel main lug
7
Main breaker and branch breaker tripped simultaneously
4
Whole House Surge Protection at Main Panel
8
Can I add a breaker to my main disconnect panel?
1
Need advice on replacing 100amp main lighting breaker in a pushmatic- live panel involved in diy