Raising a porch light and doorbell?

A previous owner of our house installed a front deck over the top of the two concrete steps leading up to the front door. Unfortunately they did not raise the front porch light and doorbell.

So many people have hit their head on the porch light, which currently sits right at head height at the top of the stairs, that it's starting to break the base... and the doorbell is about 24" off the deck, making it a little hard to reach for an adult.

I've looked behind both of them, and both have reasonable cutouts in the siding, that if I moved them up a few feet would be pretty obvious. I'd like to move these to an appropriate height without leaving behind holes in my wood siding.

Thoughts on how to proceed? 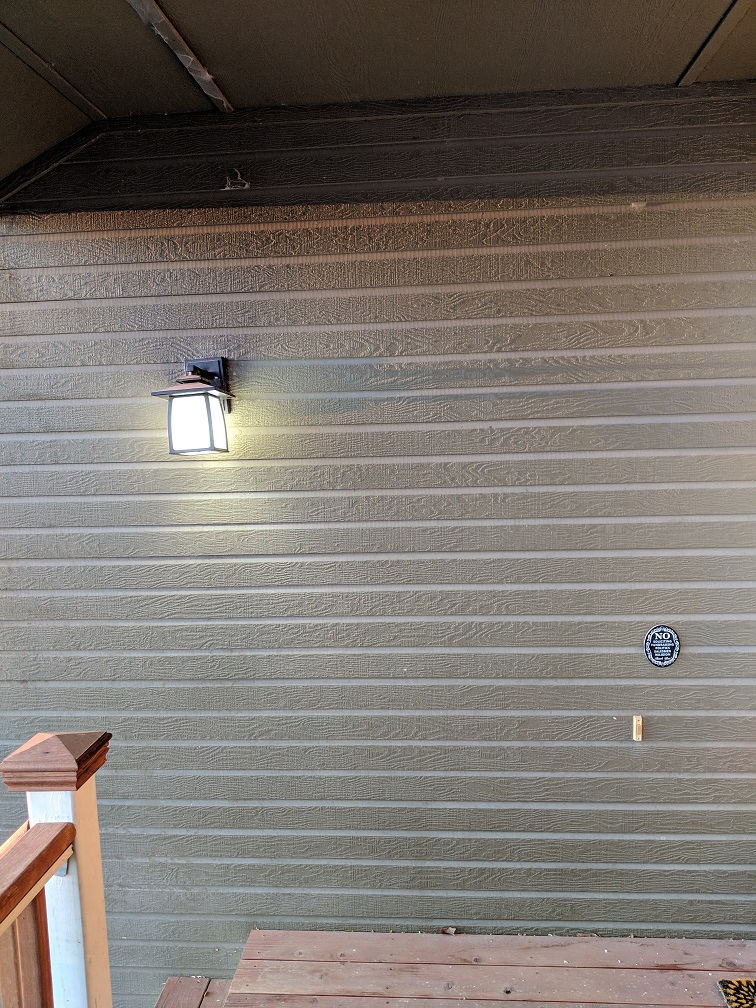 Is there an accessible space above this ceiling? I moved a front door light from the wall to the ceiling by installing a ceiling fixture. The space was accessible and I was able to pull the wire up into the attic.

Our exterior entrance space was small laterally and the wall fixture prevented full opening of an outward opening storm door we added. I covered the hole in the wall with a sturdy board on which I mounted an objet d'art -- a flat glass representation of an owl made by my brother.

If the space is not accessible or you just want to move the fixture higher on the wall, you could leave the current box in place and run a cable up to to new box higher up. Since the existing box would have a splice in it, you would have to cover the existing box with a listed cover which could however be painted to match the wall.

The wiring for a doorbell could be fished inside the wall up to a higher location or it could be run externally say under a length of trim, e.g., 1/2 to 3/4" thick by 1.5 to 2" wide. I would mount the new door bell on the trim.

Not the answer you're looking for? Browse other questions tagged lighting deck doorbell or ask your own question.