What type of Circuit Breaker is required for this slot?

I was looking at adding an extra breaker or two to my panel as I have two open slots. I opened the front of my panel to see what I was dealing with inside and was perplexed by what I found, I'm going to obviously need a professional for this but for my own education I'd like to find out what's going on in these two slots, it doesn't look like a 2-pole breaker would go there but I could be wrong? Can someone clue me in, thanks! 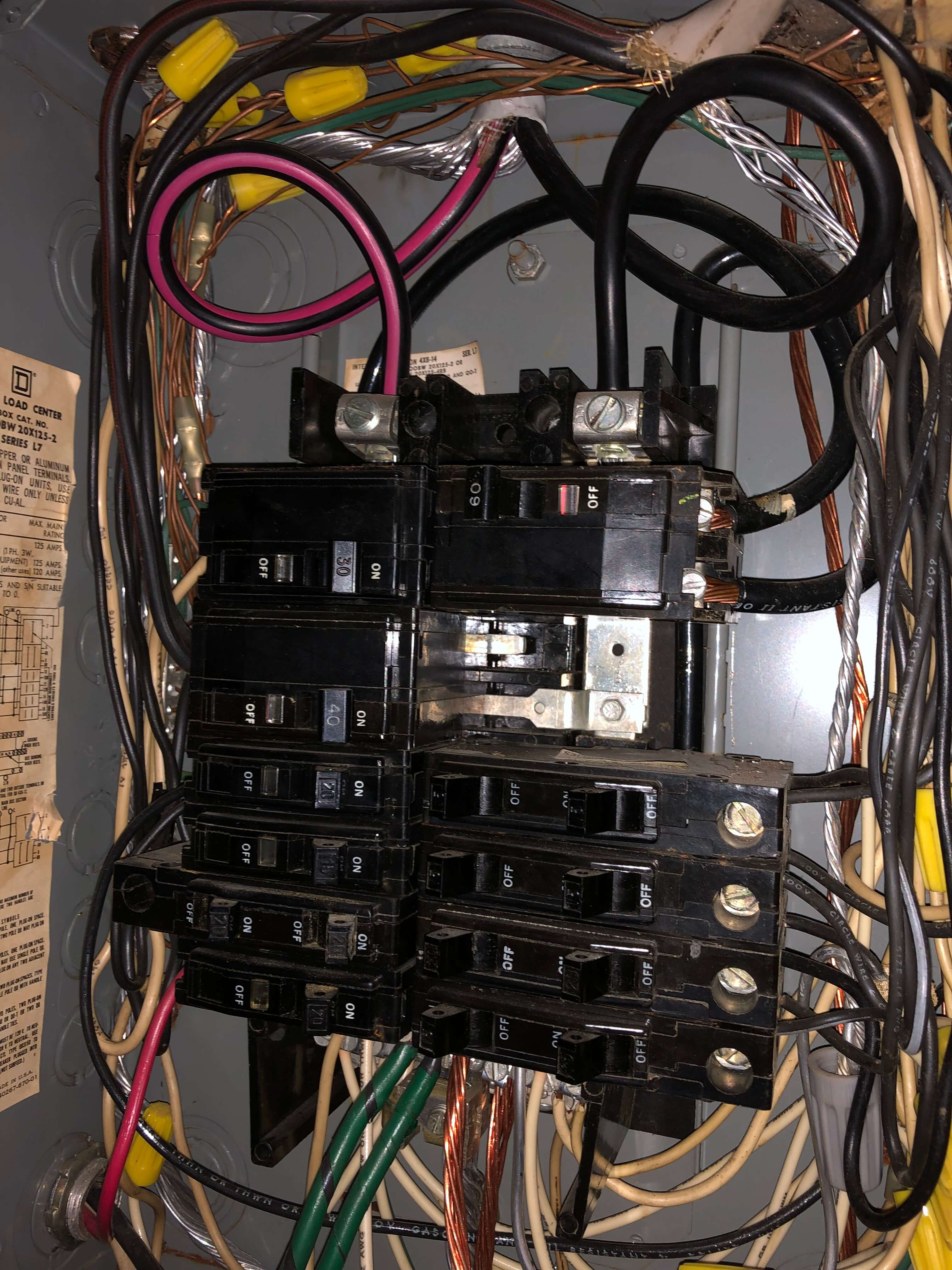 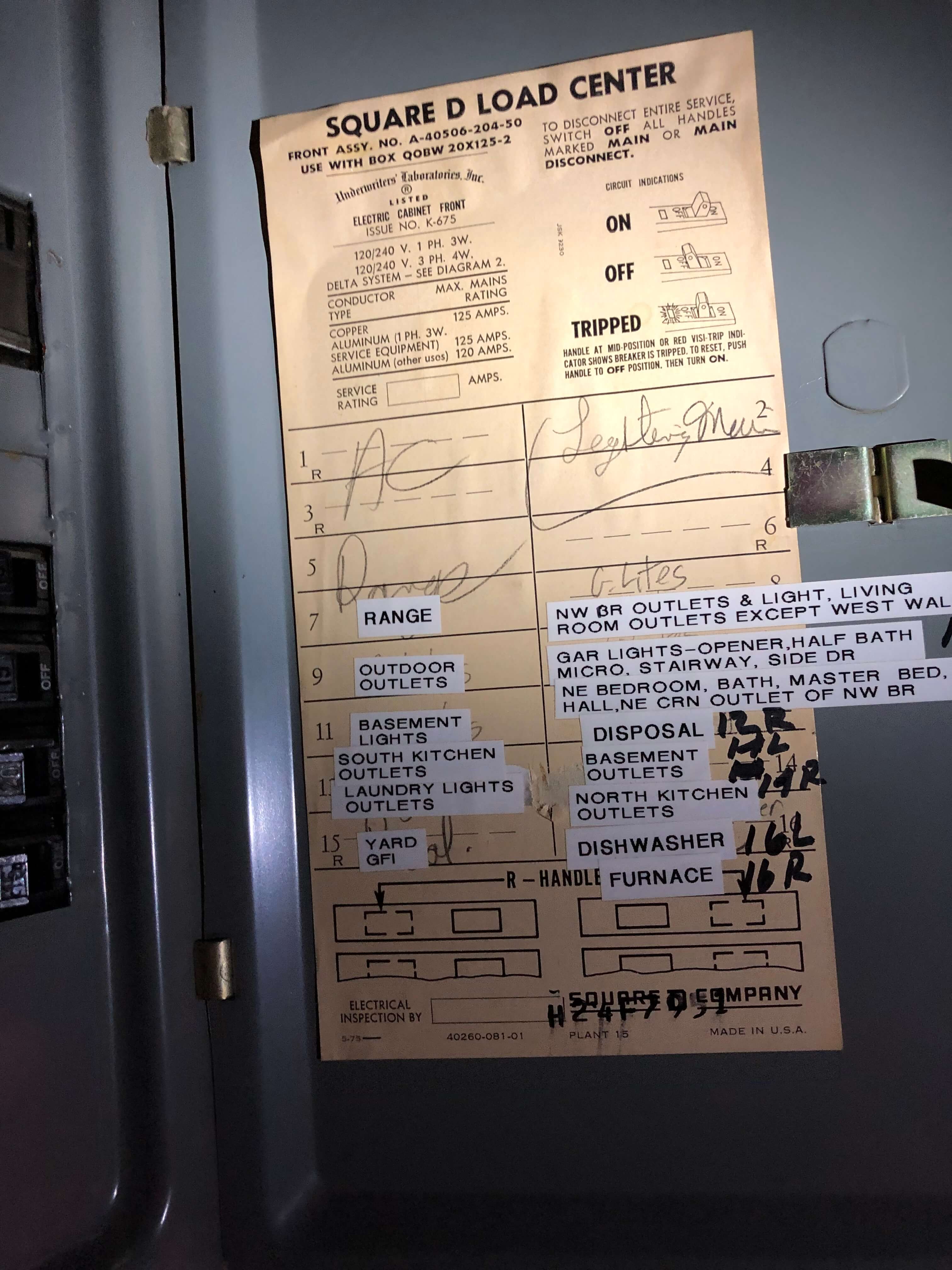 Based on Harper’s answer I’d like for the time being until I have the funds to go with the Easy Option. I do have a few follow up questions in regards to it. This is being done with the intention of adding some extra lighting and outlets to my attached garage. I have a single 40 watt and 15 amp plug in my ceiling not great for a workshop.

When wiring it this way I’d use the proper gauge wire (12 or 8 depending on amp breaker). But would I just be running #/2 one to each hot terminal for the independent loads?

I would never ask electrical advice at a big box store, my question was more so could I go to one and purchase the supplies? So I can go to a big box store and get the proper Square D “QO” breaker?

@Harper Thank you for updating your answer with more info. If I were to keep the lighting on it's current circuit that looks like it's going on breaker 10 which is the current light and opener, microwave, half bath lights, basement stair lights and the side door light, that's only a 15 amp and I have some old 2 bulb fluorescent units I was going to install in the garage (4 or 5 of them), would this circuit be able to handle that additional load?

Spot 5/7 for the range is a 40 amp double pole that is not in use, we piped in gas because well I hate electric stoves. Could I remove that breaker, put in another 20 amp double pole and do the same thing and run my lighting off of that one? Is there a requirement that you provide a 240v for a stove?

Finally, when wiring up a double pole as two separate 120v services, would you wire up each pole like you would a single pole? As in Hot to one leg, neutral to neutral bus, ground to the ground bus.

This is a "Rule of Six" aka Split Bus panel

Early on, most homes got 60A of AC electric service. Later on, houses wanted more - but 100-125A main breakers were much more expensive. So they just had multiple main breakers, all in the cheaper <60A range. Regulators didn't want homeowners having to switch off 20 breakers, so they wrote the Rule of Six that there can be no more than 6 main breakers to turn off the whole house. That forced them into a split bus design, where one of the six breakers powers additional spaces in the panel, an internal "subpanel" if you will.

The one in the upper right carries power to the "rest of the panel", the area with all the single breakers and double-stuff's. That lower area is, effectively, a subpanel in the same box. Shutting off that breaker shuts off power to the "subpanel's" buses. It is impossible for you to shut off power to the upper area.

You must use particular breakers, and it appears this panel is compatible with simple breakers in the Square D "QO" family. That is great; this is a top tier panel that is commonly used in industry. One would not be out of place in the Boeing factory. And the family is still made, so if you go with a subpanel, you can continue with QO, and I recommend you do.

There are 3 such 2-pole breakers currently installed, including breaker for the "subpanel" area. It appears you have the option to install one more. I wish I had a better view of the panel labeling, however it appears to say ONLY a 2-pole breaker is allowed there, or alternately a "dual 2-pole" which serves dual 240V circuits. You are not allowed to put single breakers there end of subject. (however that is not a barrier).

So several options from here.

In this case you stick a 2-pole, say 50-60A breaker ($10) in that location. You then feed a subpanel, where you have liberty to add a number of circuits.

Now on this forum we recommend very large panels (i.e. 40-space, $190) even if a small 12-space ($80) would suffice for now -- because the cost differential is tiny, compared to overall project cost of installing a panel. And you'll never need to upgrade your panel again, ever, and even more importantly, your ambitions are never limited by panel spaces.

(QO is also a more expensive panel than some; you don't have to remain loyal to QO, it simply allows you to exchange breakers.)

I'll take it one step further still. Choose your subpanel, and its position, with an eye toward making it the main panel in the future. That is, locate it where it'll have easy access to the conduit from the meter. At some future point, you reverse the deal, and make the old Rule-of-Six panel the subpanel.

Once your new subpanel is in, you add new circuits to it. There's no reason to fuss with the old panel; it can cheerfully serve forever as a subpanel, and is actually legal for new installation today as a subpanel.

There's another 20A side/leg unused. Could you attach another, independent 20A/120V circuit there also with 12/2 cable? You bet. They will be independent, except they will have common-trip, and common maintenance shutoff.

Could you do a multi-wire branch circuit with 12/3 cable? Yeah, the 2-pole breaker would be correct for it, but you really need to know what you're doing with MWBCs, and they have issues with GFCI and AFCI, so they have largely gone out of style. I can do them because I have a lot of experience with MWBC, but nonetheless, usually I don't.

Now, from your edit, you say you want to upgrade both lighting and receptacles in the garage. Use the old existing circuit for all the new lighting. Use these two new circuits for receptacles only. That way, when you find out a table saw + a dust collector will trip the breaker, you won't be in the pitch black with your fingers inches away from a spinning blade! You always want lighting on a different circuit when possible.

This would give you dual 2-pole breakers, allowing you to do the above trick twice, giving 4 circuits.

However, it's quite an old panel, and it plainly intended to support certain series of QO breakers which may no longer be made. You would need to closely study the labeling and the specs of the currently available QO quadplex breakers, and any Siemens "QD" quadplex which may exist -- to see whether the new breakers are listed for that panel.

Normally, you must not use brand X breaker in brand Y panel, as they won't fit properly. Siemens QD was specifically engineered to fit in QO panels (won't fit Siemens), and UL tested and classified them as a safe match.

The labeling clearly shows it's not intended to support the "open quadplex" breakers where you have a 1-pole, a 2-pole in the middle, and a 1-pole.

Followups from your update 2:

All that lighting and the opener will fit on the circuit fine especially if it's LED, but the microwave is a bridge too far. The fluorescents, if they're old, figure about 100W (0.83A) per 2-lamp fixture. If they're reasonably modern T8 fluorescents then 65-75W (0.54-0.63A). I upgrade old fluorescents to T8 since the cost is very low (buy "pull" ballasts on ebay).

Yes, you can change that range breaker to a 20A. Cap off the old wires in case the next guy wants an electric range.

Yes, when hanging 2 circuits on a 2-pole, you just pretend they are 2 separate breakers without a handle tie, hot to the breaker, neutral to the neutral bar etc.

I defer to the superior answer by Harper that has the correct description of this older panel that I didn't know the history of.

This is an older style "Square D" breaker panel with some two-pole breakers (that take up two slots) and some old-style tandem breakers (one slot, two switches).

You probably can't find that style tandem breaker anymore unless you find some NOS (new, old stock) ones on eBay or similar. You have two open slots so you could use two single pole breakers for 120v loads or you could use one two pole breaker for a 240v load.

Also, I don't see a main breaker in this panel, so it's probably in a box by itself. Make sure you know how to cut off the power (I'll just assume you did before taking off the front panel).

I guess it may look odd because of the metal contacts that connect to the breakers. There are two silver metal bars (left and right) and each bar has a "finger" that extends out on every other slot. With this arrangement, each row in the breaker panel is on a different "leg" of service, and two pole breakers that take up two slots can pick up both legs. The breaker has a connector near the center of the panel, so it doesn't touch the larger part of the finger that you see on the second free slot.

7
What is a split bus panel, and how do I recognize it in the field?