We've had some electrical work done which has resulted in a number of holes in drywall about 8cm in length by 2cm in height similar to below: 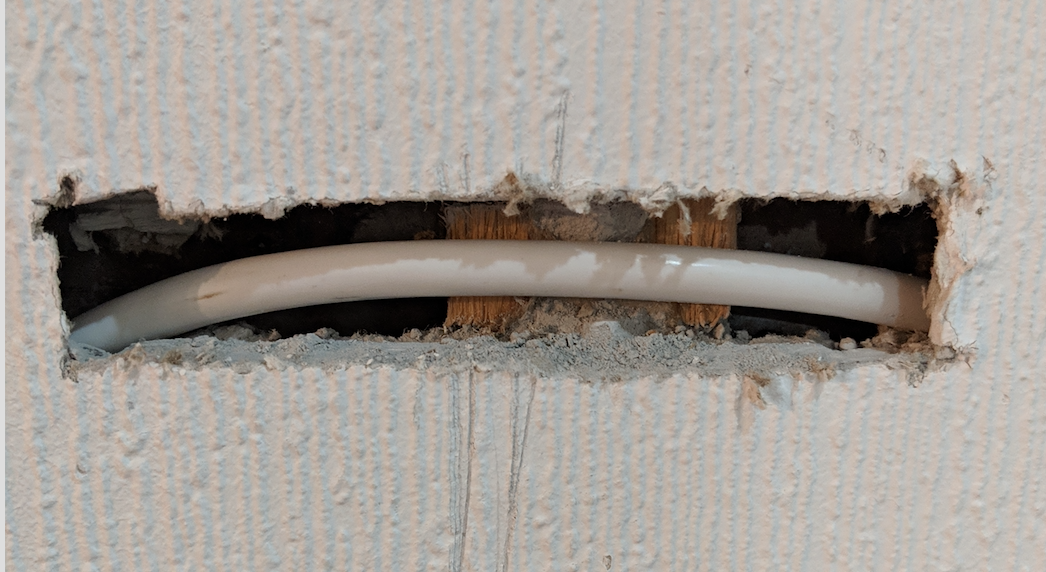 I was intending on making small cuts of plasterboard but since the cable doesn't go through the stud this won't be possible. What's my best option for repairing these holes?

That's not cool. Don't know your codes in the UK but that certainly is a fail in Canada and the US. Hanging a picture with a thumb tac can potentially puncture that. Actually no it's not to code, it can't be unless there is literally no code in place. (highly unlikely in the UK it might be code in a third world country)

You need to have it fixed before you conceal it. If this is the only spot that is like this, it could be a apprentice or just a moment of extreme laziness on the part of the worker. Ask the person to fix it to code by at least notching the stud if it's not load bearing and adding a striker plate.

I don't know why guys do stupid things like this. If you have to do a patch it really doesn't matter if it's 12x12" or 6x1" in just make the whole big enough to do your job.

Once the repairs done properly patching the holes will be a lot easier. If you ever did have to patch a hole similar to this it's often easier to just make it bigger anyway so you can add blocking into the back.

Not the answer you're looking for? Browse other questions tagged repair drywall uk or ask your own question.

80
Why did my electrician put metal plates wherever the stud is drilled through?

7
Can I perform a large ceiling drywall repair myself?
5
How should I repair drywall seams that have developed cracks?
2
Possible Electrical Short After Drywall Installation
8
first time drywall repair
2
How can I repair damaged drywall?
2
Attaching a heavy item to a 'powdery' external wall
0
Must I replace drywall after very small fire?
1
How to choose drywall repair technique
2
Drywall repair problem