Tamper-resistant receptacles (marked with TR, sometimes know as TRR) are designed to be safer than regular outlets by making it more difficult to insert foreign objects. That said, there are lots of examples of things that were supposed to be safer which turned out to be more dangerous (uk outlet covers, wing floaters, margarine, etc.).

I could imagine tamper-resistant being less safe if they encourage kids to use both hands to insert foreign objects (disabling GFCI) or parents to leave extension cords in permanently to accommodate damaged plugs (increasing fire risk). is there any evidence to suggest that they are, in fact, safer than standard receptacles in the real world?

TRR are required by the NEC as of 2008 and contain built in shutters that prevent the insertion of an object into a single hole at a time. I could say that its obvious that most kids are going to try to only insert a single sharp object into the outlet, but I don't have any study to back that up.

However, there is a widely cited research study done by the Biokinetics Research Laboratory of Temple University that shows how ineffective many of the plastic outlet covers are. This study was done way back in 1997, but these plasic covers haven't changed much over the years. 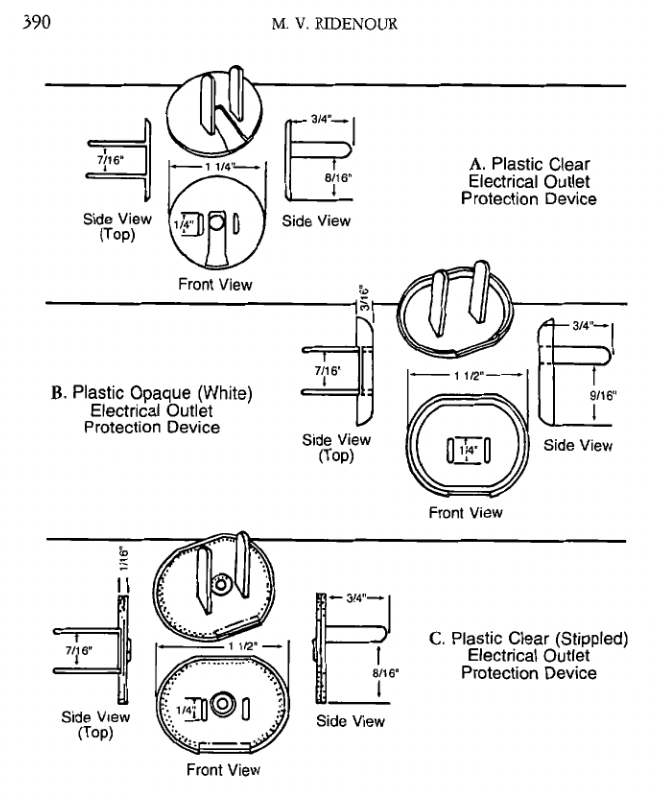 The main points here are that 100% of kids age 2-4 could pull of one of the types and almost half of 4 year olds could pull off all three designs in less than a minute.

Now, it's true that this doesn't directly answer your question with a study of TRR outlets, but it does show that "standard" child protection was not adequate. Since TRR's have a physical shutter inside and should then prevent a non-zero number of accidents, they are probably better than no cover or a cover that can be removed (or forgotten by an adult). This should help with your research if nothing else.

Additionally, this blog from Leviton states (without a citation... I know...) that:

TR receptacles have been mandated in hospital pediatric wards for over 20 years and have proven to effectively prevent electrical injuries.

How do they know? Well presumably because they design and sell the devices to hospitals, but some hard numbers would be good.

Keep in mind that TR outlets are a relatively new requirement. A quick search shows 2008 in the NEC, which typically has some lag time for state adoption. Once adopted, the NEC has immediate effect on new homes and major renovations. But there are plenty of older houses - plenty of circuits are still without GFCI or AFCI or even grounded at all, because if it ain't broke, don't fix it. That being said, plenty of parents of small children will either retrofit TR outlets or, more commonly (since it is easier & cheaper) add outlet plugs when they have little kids crawling around. I did that ~ 20 years ago because it was clearly a really good idea. But those outlet plugs are long gone - as soon as I could consider myself safe because they were a real pain to use. On the other hand, I have one good TR installed as part of a kitchen renovation at that time (electrician put in GFCI, added more circuits, etc. to meet current requirements at the time, but TR wasn't one of them so the above counter receptacles are not TR) and it works great - though I have no idea if any of my kids ever tried to abuse it.

Now to some numbers. Well, not so easy. First report I found (from CPSC) seems to be (a) primarily about product (the P in CPSC) issues than about the built-in receptacles and (b) has low enough numbers that it is hard to draw any conclusions.

Aha! The Electrical Safety Foundation International (ESFI) has some interesting statistics for 1991 - 2001.

and the typical injuries are related to sticking hairpins, keys and other metal objects into a receptacle. But wait, you say, doesn't it take TWO items to cause a problem? No, it doesn't. All it takes is ONE item placed in the hot slot of a receptacle with nicely moist hands and a finger (or any other body part) touching ground, which can include the center screw on many receptacles, as well as metal parts of many appliances, and now you have a complete and dangerous circuit.

Given those kinds of statistics, even a small decrease in the problem will have a significant impact on health & safety. It will take a while, but over time it should make quite a difference. Keep in mind also that the alternative of outlet plugs, if they even worked, and they don't work so well, as noted in another answer, was simply never used by many people. In my personal experience, typical thoughtful modern parents would use them. But most of the grandparents - who love to have the little grandchildren come over for a visit - never had outlet covers. Plus they are a pain to use for adults.

Could TR receptacles be better than they currently are? Yes. Most of the recent (a.k.a. mass market now that everyone must have them in new construction) are not nearly as good as the kind I have in my kitchen. But they are better than nothing at all and, I would argue, generally much better than outlet plugs.

there has been a 9% decline in electrical outlet injuries in the 0-4 age group since trr's became mandated by nec in 2008. this is probably due to a confluence of various factors, but it does suggest that trr's are at least as safe as traditional outlets:

it's also worth noting that even after 2008 when the injury was significant enough to admit the patient to the hospital, then the individual case reports are generally prototypical of the scenarios trr's are designed to prevent. e.g. patient stuck hairpin into electrical outlet and received burns. fortunately between 2008-2017, there were only 12 hospital admissions (and no fatalities) so it's difficult to draw any statistically significant conclusions.

unfortunately, in the same timeframe, extension cord injuries have increased 51%. possibly due to people trying to circumvent sticky trr's, although there are probably dozens of other more plausible alternative explanations

Not the answer you're looking for? Browse other questions tagged electrical receptacle child-safety usa or ask your own question.