Which bolt pattern to sister a ceiling joist?

I need to sister a ceiling joist — put a 2x6 8ft piece next to existing joist, and fasten with 1/2 inch bolts. It will be supported by a stud wall on one end (but not other end)

Anybody knows what are the rules about bolt pattern for such repair? Is this described in any building code or somewhere else? 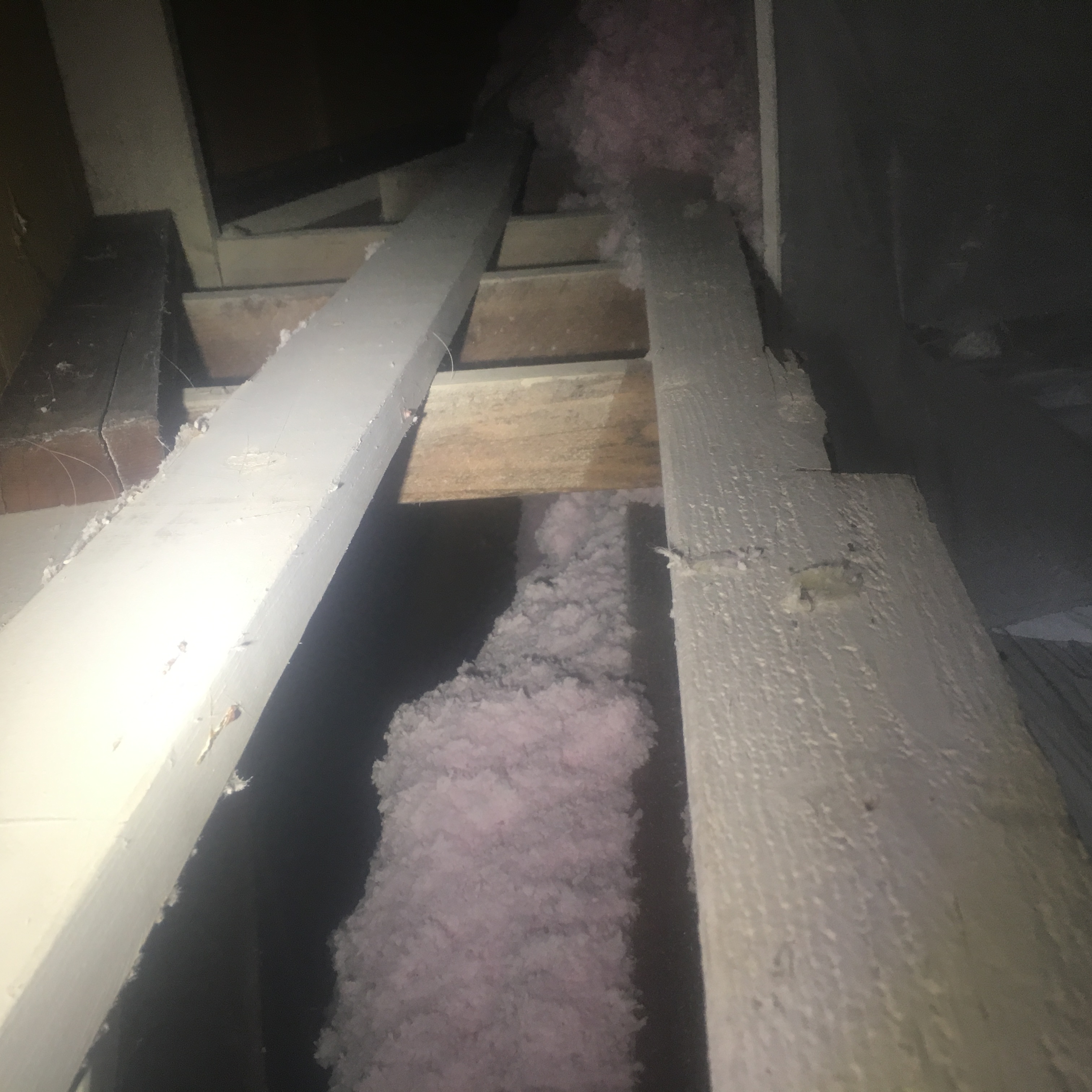 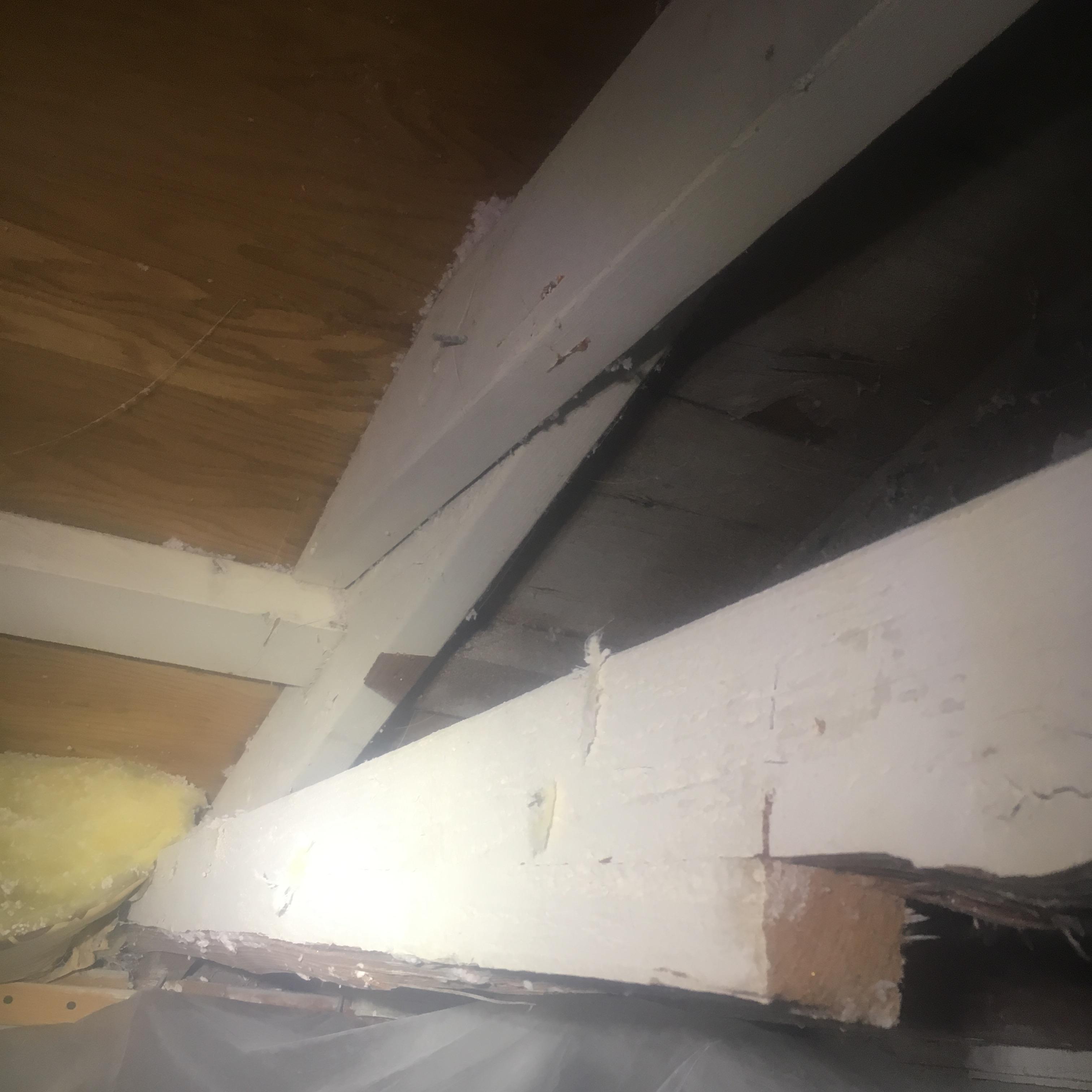 From the image it looks more like a 2nd collar tie or a rafter tie then a ceiling joist. A ceiling joist would have the ceiling finish material attached to the bottom of it. In the case of a collar tie just a generous 3/8" bead of construction adhesive in a zigzag pattern. Clamp it if you can and nail it vertically with three 16d nails vertically and 16" apart. Ensure that your sister extends at least 3' beyond the break.

Nevertheless, the roof system indicates an addition was added exactly where this roof joist was added...see change in roof sheathing in bottom picture. The roof structure is not a truss, but members have been added to help support the roof.

Therefore, the notched member has never done much for the structural integrity of the roof. That is to say, it does not have much load on it. There is no mention of sag in your original OP. If the entire ceiling is sagging, it’s not due to this notch, it’s due to the small roof joists.

That member is essentially half the size of the adjacent members (because of the notch), but it’s carrying half the load because it’s between the adjacent members. If you must sister a joist, I’d use a 2x4 and nail (or screw) with 10d nails placed about one inch from the top edge and one inch from the bottom edge and stagger the nails so the wood does not split. Make sure there’s 5 nails each side of notch.

There is nothing in the Code that explains how to sister members or fix notched members, except that loads shall be transferred to solid members.

There is no reason to use 1/2" bolts to secure a sistered joist to an existing joist. You should be able to use 3/8" bolts with no problem.

Your best bet is to use construction adhesive to bond the sistered joist to the original (as long as the original is a clean piece of wood without rot or being wet from water damage). You can select the 3/8" bolt pattern such that such bolts secure the sistered component in place and compress the glue joint to ensure a good bond. There should be no reason to have bolts closer than 24" to 36" apart although each instance should be a pair to keep the sistered joist flat against the host joist.

So if I have this you're not sistering the joist along it's entire unsupported span, you're attaching a repair section to stiffen it in the damaged area.

I don't think for one damaged ceiling joist I'd go to any huge lengths to make a repair.

I would probably sandwich the damaged section between two 8' boards or even two pieces of OSB or plywood. I'd attach the repair material with nails in a "W" pattern. Actually in this case I might use structural screws since I picture the joist being a pain to nail.

I think using a larger number of smaller fasteners in a "W" pattern will weaken what's left of the joist less. The "W" pattern avoids splitting from two fasteners breaking along the same line in the grain.

If you do use bolts, I'd use lots of 1/4" bolts and big washers, and again in a "W" pattern. The idea here is for the bolts to clamp the new piece tightly to the old, not for the bolts to bear the load in shear.

I am not sure whether I'd reinforce it with a construction adhesive. I am not sure the glue would hold up when you walk on that joist but I guess it couldn't hurt.

Not the answer you're looking for? Browse other questions tagged wood ceiling framing or ask your own question.

1
Is it ok to sister a joist to burnt joist?
1
Wood Cladding Construction Technique
1
Reinforce ceiling joist for ceiling storage
6
Can I cut a hole in a 2" x 8" joist that is less than 1/3 the height of the joist, leaves at least 2" above and below the hole, but is 10" wide?
3
Which way should my joists run for a tray ceiling?
1
How much can I safely suspend from ceiling joist? Which screws?
1
ceiling joist allowable span southern california
0
What fasteners to sister LVL to 2x6 joist?
1
Do I need to sister this ceiling jost?
1
How can I raise this ceiling joist in this shed?