Outlet with 3 sets of wires

I have an outlet I've been fooling with and now I'm at a loss. New-to-me house, cable guy came and installed internet, using that outlet for router power. Later in the evening I noticed the router turned off so I tested the voltage at the outlet and got some voltage, but way less than 120. Turned off the breaker and discovered 3 sets of wires going to the outlet. 2 whites and 1 black backstabbed into the outlet, and the other white and 2 blacks tied together with a wire nut. (See linked ghetto MS Paint sketch. I might have gotten the wires mixed up some though. Yellow is the copper wire, BTW.)

Thinking "maybe the outlet is shot" I went and replaced it with a new one. It worked for a bit and now there's nada. And now when I turn the breaker back on, I get no voltage between any of the sets of wires. There are 2 other outlets in this room-and 2 other rooms that must be on the same branch, because the lights don't work in those rooms.

I know often switched outlets have 3 sets of wires, but this outlet isn't switched. The other two outlets (and lights) in this room do work when the breaker is turned on. 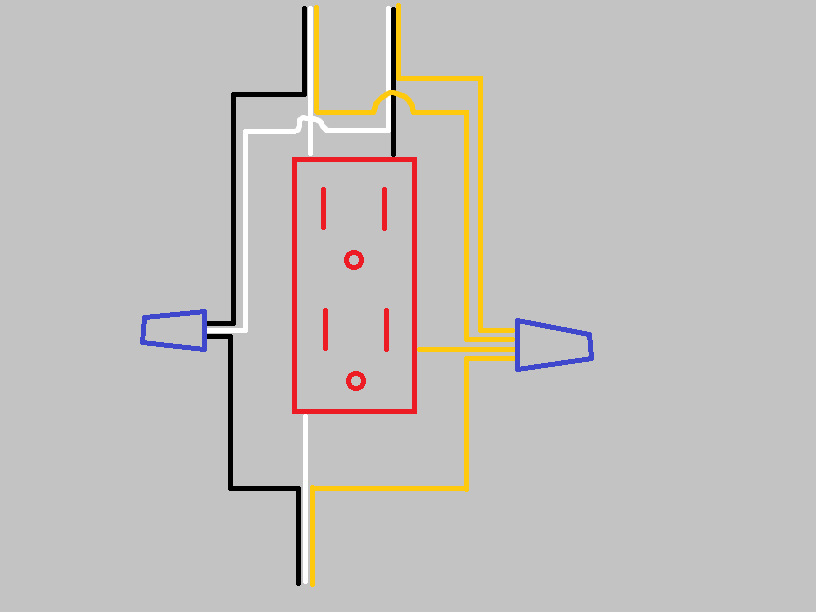 Yes, it really is switched. That's why it went out on you.

What's going on here is this. The cable on bottom, and the cable on top left, are always-hot -- one comes from the supply and the other carries power onward to other points-of-use. It makes no difference which is which.

These two cables, on the hot side, are using the wire-nut to splice. On the neutral side, they are using a feature on the receptacle. Receptacles have 2 screws on each side, which can be split, but usually aren't. When they are not split, both screws are simply connected. So the white wires are connecting using the receptacle as a splice, instead of a wire nut. No big deal.

Now, look closely at the cable which remains. The white wire goes to the bundle of hots. I don't think it's an accident that you drew it that way. I am sure it made you go "WTH?" and you double checked to be sure. The black wire is the only hot wire that goes to the receptacle. That means we do not have a "split receptacle". Both sockets do their thing together.

THat white wire is not neutral, it is always-hot, and they're stuck using that wrong color code because cables are only made one way. Switch loops used to require only always-hot and switched-hot, so they made white one of them. White is supposed to be the always-hot so it is more obvious that is not neutral. They did that correctly here. (Newer Code requires they also mark the white wire with black or colored electrical tape or paint, I sometimes mark the wire with a sharpie.)

The reason it worked, then lost power, is that you or someone turned the switch off. This would probably be a switch that you honestly have no idea what it does. It may be one of several switches in a row, that you've developed the habit of just throwing together.

Why would anyone switch a receptacle??? Because light switches are required in rooms, but installing overhead lights is expensive. So Code allows builders to switch a receptacle instead, and the homeowner is expected to plug in a floor lamp and never use the switch on the floor lamp. Commonly the homeowner is dissatisfied with this, and pays an electrician to install a proper overhead light. Costs them $400, but hey, they save a nickel a month on the mortgage. /golfclap

The voltage you are seeing is called phantom voltage. The reason is that upper-right cable goes to the switch. The white wire is always-hot and the black wire is disconnected from anything. When two wires lay close like that, a hot wire will induce a phantom voltage on the disconnected wire. Sensitive voltmeters (like any cheapie DVM) can see it, but it can't drive any load. It will disappear if you plug a tiny load like a nightlight (or cable box) into the socket while you measure.

What to do about it

First, for God's sake, mark the white wire with colored tape so the next guy knows it's a switch loop.

Add the pigtail to the 3 wires on the wire-nut. If it's a yellow wire-nut you'll be pushing its capacity limits, so maybe change it for a red wire-nut.

Now attach the pigtail to the other brass screw on that receptacle. If the receptacle uses push-in-the-back backstabs, consider the wire to be attached to the nearest screw, and Google "how do I move backstabs to screws" because backstabs are generally unreliable, and you might as well solve that while you're in here.

Now, search that receptacle for a breakaway "tab" between the two brass screws. Break off that tab.

Do not break the tab on the silver side. If you do, buy a new receptacle (they're $3 for the good ones), don't swap sides!!!!

Now you have one socket switched by the mystery switch, and the other socket always-on.

6
Why is a white electrical wire connected to 2 black wires?

4
2 circuits connected in one box?
2
Adding additional outlet - max wires and box size?
3
2 prong outlet with 3 wires
8
Wall Outlet with three sets of wires!
1
Wiring an outlet with two white, one red, and a ground
1
how to add an overhead ceiling fixture to a switched outlet run
1
Reconnect an outlet that has 3 cables
1
3 sets of wires in outlet box, lights won’t turn off
0
Still reading open neutral after restoring power to lights and outlets